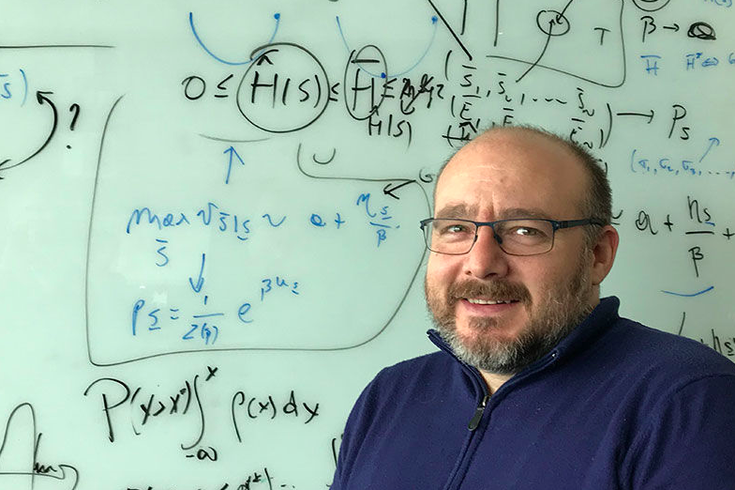 Researchers at Temple's Institute for Computational Molecular Science, led by Vincezo Carnevale, above, have broken ground on the behavior of an ion channel called TRPA1. This protein plays an important role in how we sense pain from internal and external environmental triggers. The research will help in the development of future drugs that can treat a variety of chronic pain conditions as an alternative to opioids.

As the medical profession searches for an effective alternative to the addictive danger of opioids, Temple University researchers have reported a breakthrough in the study of a next-generation chronic pain relief strategy.

An interdisciplinary team of scientists at Temple's College of Science and Technology partnered with San Francisco-based biotech firm Genentech to examine an important function of our sensory nerve cells that signals pain.

The research, published recently in the Proceedings of the National Academy of Sciences, focuses on an ion channel called TRPA1. This protein is responsible for generating electrical impulses that prompt the nervous system to sense environmental irritants that cause pain.

Over the past five years, the Temple team has used machine learning to analyze the TRPA1 ion channel across a variety of species. By studying evolutionary patterns of mutations in TRPA1, they were able to develop an understanding of the principles that regulate its function.

Based in part on the research at Temple, Genentech designed and synthesized molecules that target the TRPA1 ion channel.

With these molecules, the team at Temple's Institute for Computational Molecular Science were able to propose a theoretical model for how these molecules would act and how to increase their potency through further modification.

In vitro testing by Genentech later validated this model as a basic proof-of-concept, opening the door to future testing on laboratory animals as soon as next year.

“We’ve established design principles for the next drug candidates,” said Vincenzo Carnevale, one of the study’s co-principal investigators and an associate professor of biology at Temple.

The findings follow previous research on TRPA1 that investigated its activation through the consumption of wasabi, which triggers protective mechanisms in our bodies.

Scientists spent a large part of the last decade trying to created a detailed structural model of TRPA1 that can guide the development of future analgesics that carry a lower risk profile to patients.

“Given the worldwide opioid abuse epidemic, to address chronic pain, we need to develop molecules that can offer relief to patients without the nasty side effects known to occur with opioids,” said Carnevale, one of the study’s co-principal investigators. “Our goal is to inhibit pain signals in the nerve fibers where such signals originate—in your finger if you touch something hot, for instance—rather than treating it downstream in the central nervous system.”