The comedian isn't involved financially; he just likes what a cancer survivor's Sir Cannabis Apparel is all about 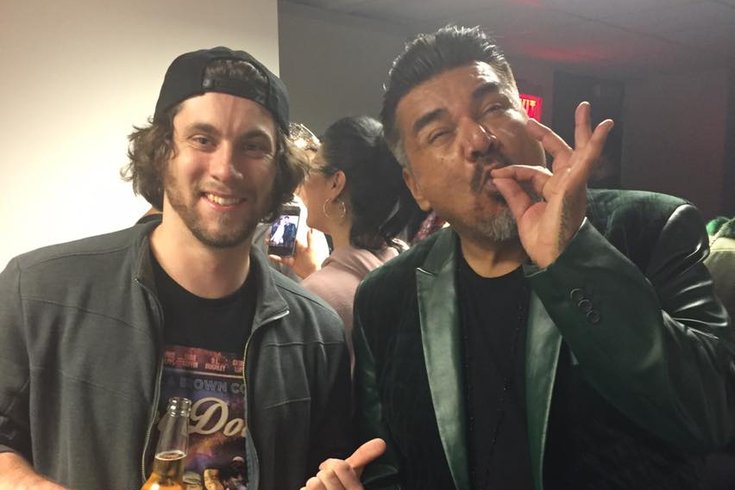 After battling testicular cancer, Temple University Fox School of Business graduate has launched Sir Cannabis Apparel. Thanks to social media, his story drew the support of comedian George Lopez, who's image is incorporated into the garments he's selling.

The past several years could have gone much differently for Chris Voag and his family.

In 2012, he was in his second to last semester at Northampton Community College when he was diagnosed with stage one testicular cancer, which brought on a month of rigorous treatment.

That meant facing cyst platinum chemotherapy – which he called “the strongest chemotherapy” – and he offset those treatments by smoking “some Pineapple Express from the black market, one or two grams a day.”

He credits that cannabis strain with keeping him “nausea-free during the entire process” and getting him back to school and gym within a matter of weeks.

Getting back to school enabled him to enroll at Temple University’s Fox School of Business. That progress was met with some more bad medical news, though.

“Fast forward three years later to my last semester at Temple and my father was diagnosed with stage four oral cancer,” he said. “It didn’t look like he was going to make it.”

That last quote came with a caveat: as he does for his own cancer battle, Voag credited cannabis – specifically the “Skywalker OG strain” – with helping his father Jim through a perilous fight.

To hear Voag tell it, “doctors wanted to remove his (father’s) tongue and cut three other tumors out of his neck.” Then came the “Rick Simpson oil,” hot THC tea and vaporization.

The family thinks that that helped his father survive treatment without following the daunting prospects recommended after diagnosis.

"Everybody has a story, but they’re usually full of s***. He wasn’t." --George Lopez

We share all that information not to present cannabis as having saved the lives of a father and a son, but as background to explain how “Sir Cannabis Apparel” came to be. (After all, his oncologists weren't all that keen on his penchant to involve cannabis in his treatment, he admitted.)

Upon graduating from Temple with a bachelor's degree in business administration and management – “with a focus into entrepreneurship” – he launched that effort with a weekly “Cannabis Warrior Series” on Instagram.

“It was a way to highlight patients like me and my dad in an effort to remove stigmas by proving the versatility of cannabis one person at a time,” he said of launching “Sir Cannabis Apparel” in 2016.

In addition to offering the social-media platform for cancer survivors like himself, Voag will soon start selling hoodies, T-shirts and hats with the support of a famous comedian. 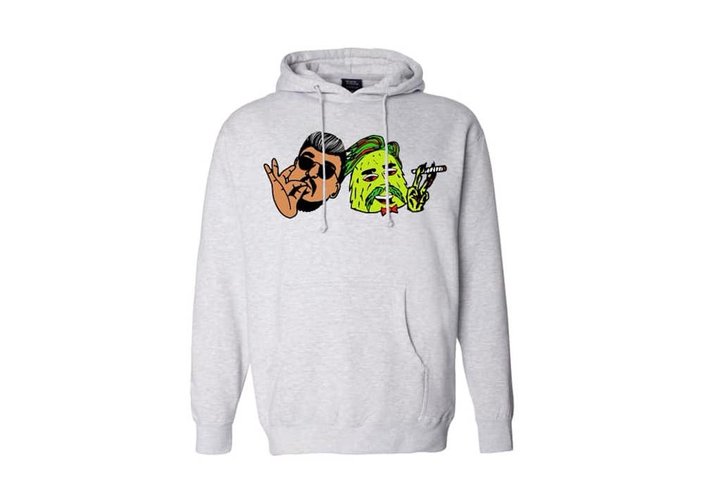 “I first heard of it a few years ago on Instagram,” said George Lopez when he called PhillyVoice before heading to a Sir Elton John concert in Los Angeles on Wednesday night. “You know how people attach you to stories to get your attention? Everybody has a story, but they’re usually full of s***. He wasn’t.”

Lopez and Voag struck up a relationship after the former shared his stories of cannabis oil’s benefits for cancer patients, and how it can steer people away from prescription-pill addiction.

“He looks like a guy that’d sell it to you and not care about you from there, but he has a big heart,” Lopez said jokingly, noting that the interactions led to him steering a fellow comedian, the late Charlie Murphy, toward oils as he battled the leukemia that would ultimately take his life in 2017. “That helped Charlie get connected with CBD oil.”

'SO HIGH I FORGOT I HAD CANCER'

Looking back at his journey, Voag couldn’t point to medical records that distinctly credit cannabis products for helping him and his father. He lets the anecdotal evidence make his case; he knows he avoided nausea and that his father (who is still being studied by ear, nose and throat doctors) didn’t lose his tongue to cancer.

He said he’s lucky that he caught it when he did, as it crept into his blood stream, which would’ve meant leukemia.

“I was never getting sick. I would get so high that I forgot I had cancer,” he said with a laugh. “I used to question why it happened to me, but I think everything happens for a reason now.

“I look at life differently. I was able to gain weight, and I gained a passion for this cause. I still have my off days, with anxiety, with dreams that I have a tumor in my stomach, a tumor in my brain, waking up crying because it’s so bad.”

His father’s diagnosis also sent him into a spiral to the point of “almost failing out of Temple.” Three years after his own cancer fight, he saw his father going through it. That the cannabis tea helped in the fashion it did was what prompted the idea for the Cannabis Warriors series, which he took to his Fox School mentor Dwight Carey.

“He said, ‘Chris, you might not release anything for 10 years, but get the brand logo and plans together now,’” recalled Voag, who took that recommendation to mean he might be onto something good.

Sitting around smoking with Bill Mahoney, a friend and graphic designer, they were inspired to have a weed-inspired take on Mr. Peanut “rather than just some generic stoner image.”

From there, Lopez gave his blessing to be incorporated into the imagery. Now, he’s a focal point of the garments that are available for pre-sale now and will launch full force when the comedian comes to Reading for a March 1 show at Santander Performing Arts Center.

Voag said he hopes to expand from the current line to gear for “snowboarding, skiing, hiking, motorcycle expos.”

“We're trying to expand our image," he said. "We’re just trying to hit every market with heavy cannabis use but where people don’t admit it."

The clothing line itself will be available for sale at Lopez's show in Reading, as will pre-orders for pickup. (They'll also be sent to customers who can't make it there that night.)

Lopez said he's not involved in Sir Cannabis Apparel in any financial sense. He's just happy to help someone with who's mission and message he agrees.

"I endorse it. I'm letting him use my image since he's over there doing something good, and hope it'll help sell sweatshirts," Lopez said. "I think he'd like to help as many people as possible, and people are reticent to try the oils. I hope it helps get the word out."