Temple physician has a (surprising) habit

She also known as Sister Jocelyn at Temple University Hospital 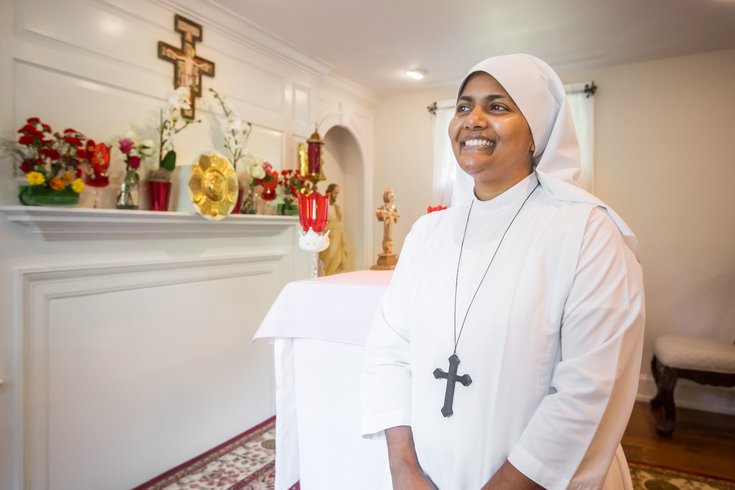 Sr. Jocelyn Edathil SIC, is a medical doctor and assistant professor of clinical medicine at Temple University Hospital. Here, she stands in the chapel of the Bethany Convent, where she lives in Elkins Park, Montgomery County.

But it's what's underneath – the veil and traditional white habit of the Sisters of the Imitation of Christ – that makes her unique among the city's doctors.

An assistant professor of clinical medicine, she is also a nun. So while she provides comprehensive general medical care and patient education to Temple patients, Dr. Edathil also performs unofficial chaplain work as Sr. Jocelyn.

Her colleagues, she said, often seek her out to pray with their patients and offer them spiritual comfort, and she will also ask her own patients if she can come back and pray with them if they appear open to the power of prayer.

Even though Temple is a secular hospital, Edathil said the staff has welcomed her dual role. And while she expected it might be more difficult to get full drug or sexual histories from patients because of the habit she wears, she is pleasantly surprised that most patients feel comfortable opening up about their lives to her.

That's not to say that what she wears underneath her lab coat doesn't stir up a reaction on occasion.

“Sometimes my really sick patients will see me and think, ‘Oh, no. They brought in the nun. I must be dying,’” she said. “Once or twice a patient even thought I was an angel.”

She added, “I had one patient tell her daughter that she saw an angel and the daughter thought she was hallucinating. The next day she is like, let me call my daughter, she thinks I am crazy.”

Edathil works 7 days on, 7 days off at the hospital and when she is off-duty she is engaged in her responsibilities with her church, the India-based Syro-Malankara Catholic Church. She lives in Elkins Park, Montgomery County, with Sister Benedicta, an India-born Bethany sister.

“We are a small community so the diocese includes all of Canada and the U.S. I am assigned a parish in Elizabeth, New Jersey where I am involved in the children’s, youth and women’s ministries,” she said. “I also give a lot of retreats and speaking engagements.”

Edathil, 38, finds great joy in her both her vocations, but she wasn’t always confident about her path.

Growing up, she had always loved science, and considered a career in medicine, but she couldn’t really see herself as a doctor. At the same time, she was also attracted to the religious life, but again worried that she wasn’t good enough.

There were always signs around her, however, pointing her in the right direction, she said. Like when her third grade teacher told her she should become a doctor because her handwriting was so terrible or when she was nine years old, and her uncle, Father George, encouraged her to join the religious life.

Then, at the end of high school and at Villanova University, where she went for her undergraduate degree, she fell in love with organic chemistry and decided to become a professor instead. Still, she she wasn’t seriously considering a religious vocation either.

Before graduating from Villanova, however, she started to rethink her calling. Her involvement in campus ministry revived her desire to join the religious life, which was reinforced by conversations she had with different priests who recommended she become a nun.

Meanwhile, amid strong thoughts about becoming a physician, doubts lingered.

Ultimately, she graduated Villanova with a chemistry degree, enrolled in the M.D.-Ph.D. program at Penn State Hershey, but decided to first spend a year in the Ph.D. program in organic chemistry at the University of Pennsylvania to give herself more time to decide if she wanted to pursue medicine.

Throughout her Penn State studies and residency at Temple, which started in 2010, Edathil never lost sight of her other calling. But she was encouraged to finish her medical training first.

Once she completed her residency and joined the staff at Temple as an academic hospitalist in 2013, she knew the time was right to start her religious training. She just wasn’t sure how to juggle it all. Because she wanted to join the Bethany sisters, she knew she needed to prepare for her postulancy and novitiate in India – and that would take her away from the hospital.

Luckily for Edathil, she found a lot of support both at Temple and from her congregation and superiors. On September 2, 2013, she traveled to India to start her religious training. On occasion, she was permitted to return to the Philadelphia hospital to keep up her skills and renew her medical license.

Language proved one of her biggest challenges. She struggled a bit to understand Malayalam, the dialect spoken in Kerala. While her mom, a retired ICU nurse and her dad, a real estate broker, were both born in India and came to the United States in the 1970s, Edathil and her siblings always spoke English at home.

“Nonverbal communication is also stronger in nonwestern societies so I was trying to pick up cues and try to understand thought processes,” she added. “The congregation was very understanding of my unique background, not only being American but also a physician and recognized that my thought processes would be very different.”

Because she was the first sister of her church born in North America, she was even given permission to make her first profession outside of India – at a church in Elmont, New York – on August 6, 2013.

Edathil said she is comfortable slipping back-and-forth between her dual roles, but has noticed a big difference between the secular world of medicine and the religious world.

“In medicine, you receive a lot of accolades and your ego receives a lot of massaging," she said. "But in religious orders, you are expected to take vows of obedience, poverty as well as chastity.

"As an autonomous physician you make decisions about your patients’ lives every day, but as a religious sister we are trained to believe that at the end of the day, only God makes decisions in life, that in the end we must submit to God’s will.”