Temple University Board of Trustees votes 'No Confidence' in President Theobald 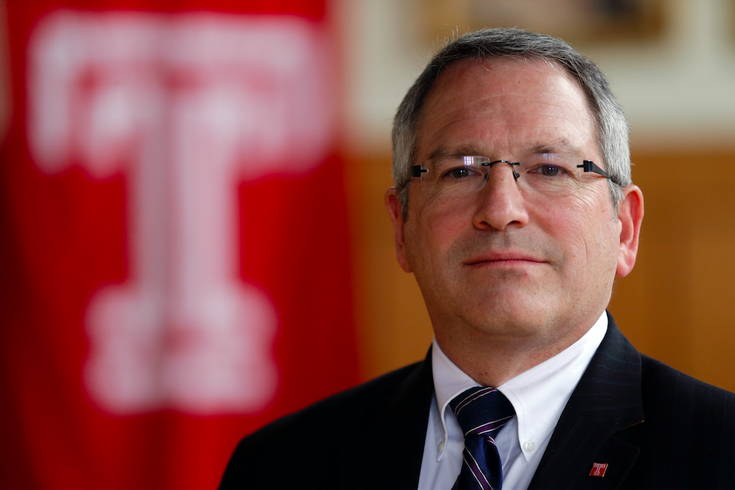 Acting on more than a year's dissatisfaction with a runaway budget, the Temple University Board of Trustees placed a vote of "No Confidence" in President Neil D. Theobald during an executive session of the board held Tuesday.

The shocking announcement, made at the end of a routine public meeting, comes in the aftermath of a recent university shake-up that saw provost Hai-Lung Dai ousted for his apparent connection to a $22 million over-allocation of merit scholarships for the 2016-2017 academic year.

Dai joined Temple in 2007 and had served as provost for the last four years. His dismissal prompted an immediate backlash among Temple faculty, who launched an online petition calling for "board scrutiny" of Theobald's leadership. By early Tuesday evening, the petition had garnered 4,049 signatures.

"The reason for the vote of no confidence is based largely on the handling of the Hai-Lung Dai situation, including the fact that the deficit was allowed to balloon to $22 million," Board of Trustees spokesman Kevin Feeley told PhillyVoice.

After Dai's dismissal, Theobald nominated JoAnne A. Epps to become Temple's new executive vice president and provost. Epps has served on Temple's faculty for more than 30 years and is widely regarded as an influential leader in legal education. Her appointment was approved at Tuesday's meeting.

The unanimous vote on Theobald was announced following an agenda that covered a variety of university affairs. He was in attendance for part of the executive session, but left the premises before the vote was held.

"He was aware that it was coming and left," Feeley said.

Patrick J. O' Connor, Chair of Temple's Board of Trustees, said in a statement that the Board gave Theobald the opportunity to offer his resignation.

"After providing an opportunity for President Theobald to resign his position, which he refused, the Board concluded that it is compelled to proceed with Dr. Theobald's removal as president," O' Connor wrote.

Since Theobald became Temple's 10th president in August 2012, his administration has led the university to record enrollment numbers and gains in both private fundraising and research funding. By the Board of Trustees' estimation, however, Theobald failed to act quickly in response to the financial aid deficit.

"The Board believes that Dr. Theobald became aware of the deficit about a year ago, in June 2015, when it was still $9 million," Feeley said. "The deficit is a core function of being university president, yet the Board of Trustees didn't know about it until March or April of 2016, when it was $22 million. None of that communication was forthcoming."

The budget, Feeley said, has since been rebalanced and resolved after resources were reallocated from different departments. No students were affected in terms of loss of programs, aid or tuition, he added, though it was later reported that that the Board voted Tuesday to raise undergraduate base tuition by 2.8 percent.

"The issue is, in the Board's view, with a $22 million deficit, someone has to be held accountable. That person is the president of the university."

On July 21, the Board intends to officially seek Theobald's dismissal and appoint current university chancellor Richard Englert as acting president of Temple University, a role he held during the search that led to the appointment of Theobald.

An email from Theobald to the university's lawyers and HR department, obtained by PhillyMag, indicates that Theobald plans to challenge the decision.

“I want to make it very clear that I have not, and will not, be resigning from my position, which is a position to which I am fully dedicated,” Theobald wrote. “I look forward to remaining President of Temple through December 31, 2017 (pursuant to my Employment Agreement).”

Feeley declined to comment on the possibility of litigation.

"We understand that this is difficult for everyone in the Temple community," Feeley said. "But I think we take comfort from the fact this is a great institution that's made a tremendous amount of progress. We'll continue to do that. The Board of Trustees is confident that we have an opportunity to chart a course for that progress."