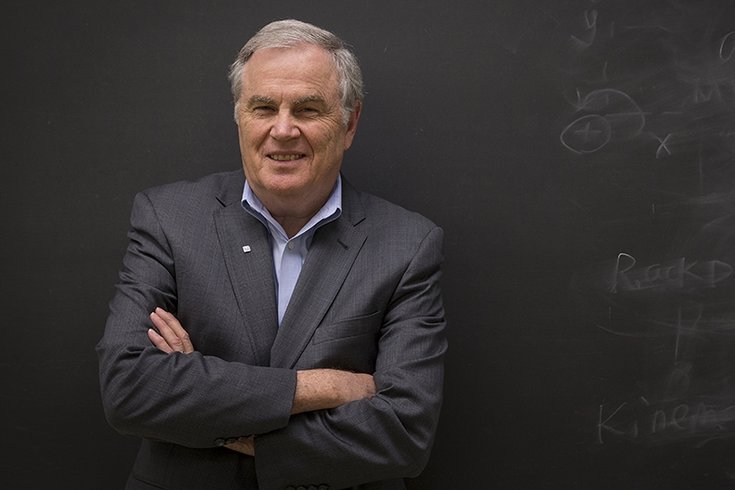 Tom Edwards, a Temple University engineering management professor, says hiring people with autism can benefit companies – if they provide the mechanisms needed for them to succeed.

Tom Edwards remembers a former colleague in the aerospace industry who was a computer whiz – back in the days when computers took up entire rooms.

The man, a chief engineer, was incredibly talented, but he rarely made eye contact, kept strange hours and often arrived wearing clothes that did not match.

Years later, Edwards realized his colleague likely was on the autism spectrum. By then, he had a son with autism who struggled to launch a successful career.

"He always wanted to do a good job," said Edwards, a Temple University engineering management professor who has led workshops on the benefits of hiring employees with neurodiverse conditions.

"It never quite worked out. I don't know why it took me so long to figure this out. Eventually, it dawned on me – he's not being supervised well."

About 80 percent of people with neurodiverse conditions are either unemployed or underemployed, according to Edwards. That includes anyone with Asperger's syndrome, attention deficit hyperactivity disorder or autism.

More large companies – like SAP – are investing in employees with autism. But many smaller and middle-sized companies – which employ the bulk of the workforce – do not have the resources to implement the programs developed by larger companies.

That's why Edwards wrote a book, "Leading Team Members with Super Powers," that aims to help business managers empower employees with autism and other neurodiverse conditions. The book is complete, but he's seeking funding through Kickstarter to cover self-publishing costs.

"There's no magic formula, there's no silver bullet," Edwards said. "There's a number of challenges. There's different ways to address each of these challenges. You just have to understand it, practice it and get good at it."

People with autism have so-called "deep specific skills" – abilities that range from "the absolute amazing" to important, everyday skills, Edwards said. But they also often have weak social skills, a disadvantage in obtaining a job.

During an interview, people with autism are not likely to make much eye contact or greet an interviewer with a firm handshake, Edwards said. But they may have the skills necessary to succeed in the job.

"They're not going to pass the charm test," Edwards said. "You've got to forget all of that stuff. All of those biases – none of that matters. You've got to look for evidence that they've got those deep specific skills."

SAP America Inc., the software giant with U.S. headquarters in Newtown Square, Delaware County, has sought to mitigate those employment barriers through its Autism At Works program.

Launched in 2013, the program includes a six-week pre-employment training period that allows SAP to evaluate candidates' capabilities and gives the them an opportunity to sharpen skills that make them more marketable.

"Many people have incredible trajectories," said Jose Velasco, who oversees SAP's Autism at Works program in the United States. "We hired a gentleman two-and-a-half years ago who had four software patents. We have individuals that come with advanced degrees. ... The skills are there."

Other major companies, including Microsoft and Ernst & Young, have committed to hiring more people with autism. But it's not just to grab headlines. The companies believe such employees make them better.

"The main reason is because we need talent," Velasco said. "As you know, in IT – and right now with the unemployment rates that we have – we're always looking for the best talent. Individuals on the spectrum represent a significant pool of people."

At Temple, the Office of Disability Resources and Services launched Abilities at Work, a program that creates on-campus employment opportunities for people with autism. The office also steers students toward the Federal Workforce Recruitment Program, which connects employers with motivated college students with disabilities.

These programs provide students with opportunities to build their resumes and gain valuable experience, said Aaron Spector, director of the Office of Disability Resources and Services.

"There's just a lot of widespread bias and disadvantages in the workforce," Spector said. "Hiring managers may see a person with a disability or atypical social behavior in an interview process and mass them over. It's very hard to prove that that sort of disadvantage exists, but it's very persistent."

A LONG WAY TO GO

Luke Tomczuk, a senior history major, has found both programs beneficial during his Temple experience. The Federal Workforce Recruitment Program helped him land an internship at the Defense Logistics Agency in Northeast Philadelphia, where he has worked the last two summers.

But Tomczuk, who describes himself as a high-functioning man with autism, has found Temple's Autism at Work program particularly helpful. He was hired as an information desk attendant at the Howard Gittis Student Center during his sophomore year, an experience that helped greatly.

"I think the job and the program went a really long way toward helping me figure out where I fit into this university, to help me make friends and to help me see all sorts of people I would not have seen," Tomczuk said. "It's a very beneficial program."

Tomczuk joined his supervisor, Kaitlyn Howarth, in presenting the program at an Association of College Unions International regional conference last November and later recorded a video touting the program for the ACUI national conference. He said his testimony helped other colleges implement similar programs.

Businesses looking to hire people with autism need to incorporate them into the workplace culture, Tomczuk said. That has helped Tomczuk have successful experiences at the Defense Logistics Agency and the Howard Gittis Student Center.

In particular, Tomczuk said having an understanding supervisor is essential to people with autism. When leaders understand the capabilities and needs of people with disabilities, the employee can effectively serve the company without a hitch.

He pointed to Howarth as an example.

"My supervisor at the student center, especially, is very aware of issues regarding people on the autism spectrum," Tomczuk said. "My situation is not true of all people with autism. I consider myself a high-functioning adult male with autism, but not everyone fits in that category.

"I'm confident if that if she were to hire someone who needed more help, I think she would be able to accommodate them with everything they need. It really comes down to, like everything else, leadership."

In that realm, more companies have taken greater efforts in recent years to invest in employees with disabilities. But Spector said there is still a long way to go.

"People with autism have really high unemployment rates," Spector said. "A college education is not enough to address the employment gap. We'd like to see more employers become more aware and invest more in people with disabilities as a positive contribution to their workforce."

For employers looking to do that, Edwards' book stands as a guide. But why should companies take that risk?

Edwards admitted he did not broach that subject at length in his book. But he is not without answers.

"The longer term answer is it really is not a risk," Edwards said. "If the person with autism has the right set of skills for that job, they're going to be a loyal employee and they're going to make you a better manager."