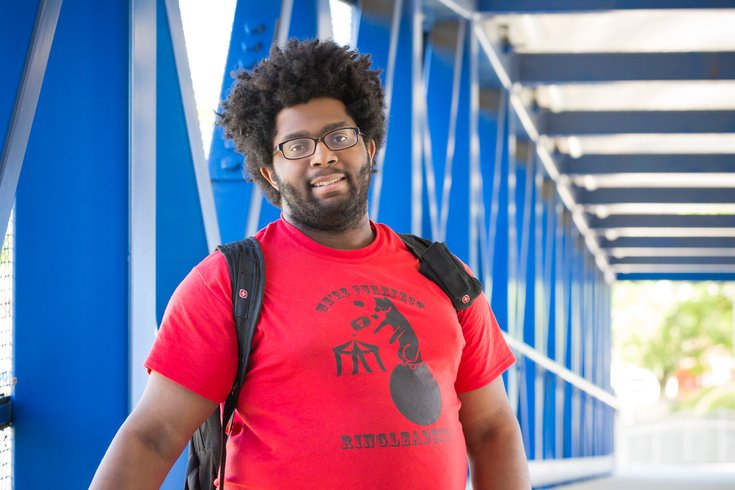 La Salle University sophomore Isaiah West will work as a summer intern with global software company SAP at its campus in Newtown Square, Delaware County. West, who is on the autism spectrum, receives support through the university's LADDER Family Center.

Isaiah West's first foray into computer coding came as a teenager, when he took the initial steps any aspiring computer programmer takes — learning to make words appear on a screen.

Now a sophomore at La Salle University, West will get his first professional experience this summer when he interns at SAP America Inc., the software giant headquartered in Newtown Square, Delaware County.

In that regard, West is like any college student pursuing a career. But, as an autistic person, he faces an extra set of challenges.

To aid West and other students with autism spectrum disorder, La Salle's LADDER Family Center has launched a unique program, dubbed "PASSPORT To Success," to provide myriad support services. Similarly, SAP has taken steps to include people on the spectrum in its workforce by launching an Autism at Work initiative.

Both programs will be topics Friday at La Salle's ninth annual Autism Conference, an event that highlights the transitions autistic people must make as they hit adulthood.

"What happens? That transition to adulthood – they can't stay home," said Carole A. Patrylo, LADDER's director of external services and an assistant professor in the education department. "This conference is about opportunities."

West, of Mt. Airy, is as bright as any student at La Salle. He earned a 4.0 grade point average at Wyncote Academy and scored a 2210 — out of 2400 — on the SAT. But due to his autism, West has challenges with the social skills that are such an important part of college life.

That's where his "PALS" come in.

'WE KNOW OUR STUDENTS'

Through PASSPORT To Success, he regularly meets with a social worker, and a marriage and family counselor, who help him set and achieve goals. And he gets help — and companionship — from two students known as "PALS," an acronym for "personal associates at La Salle."

Sometimes, West and his "PALS" head into Center City and "try not to get lost," he said. Other times, they simply hang out on campus.

West smiled as he remembered their trip to the Philadelphia Auto Show and a restaurant nearby.

"It was so hard for them to get me out of the auto show," West said. "It's almost impossible unless I've taken a picture of everything."

His other PASSPORT advisers have worked with West to improve his time management skills, helping him prioritize his classwork and organize his schedule online. Without a detailed schedule at hand, West said he struggles to stay on task.

"It's either I get nothing done, or I shove everything in at once," West said. "Then I end up sleeping at 3 a.m."

The PASSPORT program has given West a place to turn when he feels "cornered" by challenges he struggles to navigate on his own — like when his peers in his dormitory are creating too much noise.

"I don't mind stimuli that I can control," West said. "If I get into a voice chat with eight people, then I can leave. But if there's a bunch of people standing outside my door, then there's a problem."

Patrylo stresses that La Salle's student body and campus are the perfect size for a program like PASSPORT. Bigger schools might lack the intimacy that La Salle can provide through its LADDER center.

"It's like an oasis," Patrylo said. "We know each other. We know our students."

SAP, a global software firm, has its North American headquarters in Newtown Square, Delaware County, where 16 autistic employees currently work. The company seeks to have 1 percent of its workforce represented by people on the autism spectrum.

PASSPORT helped connect West to SAP, which seeks to have 1 percent of its global workforce represented by people on the autism spectrum. The software giant has 120 employees with the condition working in nine countries, including 16 at its Delaware County office.

SAP recognizes that autistic people bring innovation and different perspectives to the workforce, said Peg Monaghan, a member of SAP's Autism at Work initiative. They represent an underutilized talent pool with unique skills.

"We know that people with autism think differently," Monaghan said. "They look at things differently. ... We want the talent who create our products to reflect the diversity of our customers."

This summer, West will complete SAP's Enterprise Readiness Academy, a six-week, paid internship that prepares students to potentially gain employment at the company. The course emphasizes communication and collaboration, culminating with students developing a prototype of an SAP product.

Once students complete not only the internship but also their education, SAP will consider them for employment, Monaghan said. SAP has autistic employees working in various capacities, including software development, finance, human resources and communications.

Like any new hire, the software company pairs its autistic employees with a "team buddy" who helps them navigate their transition into the job. Volunteers accompany them to social activities, like Phillies games or monthly lunches, in an effort to help them with their social skills.

West said he hopes the internship provides him an opportunity to work better in groups, adding that he can get annoyed when group members don't carry their share of the workload.

But he also wants to build upon the computer programming knowledge he has gained since he first took an interest in computers years ago.

"I've liked computers for a long while," West said. "I've always liked playing around with them and writing code. I've started a project to take something that's already written and make it better."