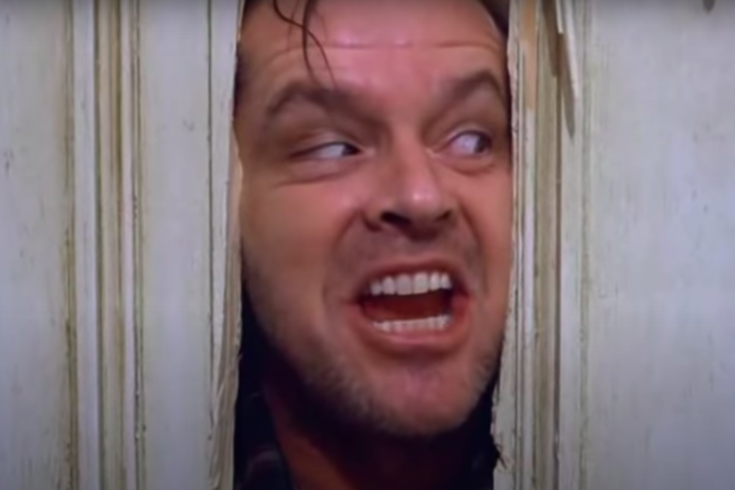 Jack Nicholson's character in 'The Shining' famously says 'Here's Johnny!' as he breaks through a door and threatens his terrified family with an ax.

A convicted Camden County bank robber will receive a new trial thanks in part to one of Jack Nicholson's most iconic film moments.

Prosecutors use of a photo depicting Nicholson's character from "The Shining" during Damon Williams' original trial was "improper," the New Jersey Supreme Court ruled on Tuesday.

Williams was convicted of robbing $4,600 from a Bank of America branch in Merchantville during the summer of 2014, according to NJ Advance Media.

The central debate of the trial was whether Williams was guilty of robbery or theft. Being convicted of robbery requires one to use or threaten violence to take property, while theft does not.

In order to make the case that Williams deserved the harsher penalty, prosecutors used a photo of Nicholson saying his iconic "Here's Johnny!" line in "The Shining."

In the 1980 horror film, Nicholson's character says the line as he breaks through a door and threatens his terrified family with an ax.

"This guy looks creepy and he’s saying some very unthreatening words, ‘Here’s Johnny,’” the prosecutor said during Williams' trial, making the argument that actions speak louder than words. "But if you have ever seen the movie 'The Shining,' you know how his face gets through that door."

Williams' attorney objected to the use of the photo, but the trial judge allowed it. The Camden County Prosecutor's Office, which brought the case, admitted that using the Nicholson photo was unnecessary, but called it harmless.

Williams was convicted of second-degree robbery and was sentenced to a 14-year prison term, according to the Associated Press. He had been in jail since 2017 and was not due for parole until 2026.

Had he been convicted of a third-degree theft charge, Williams likely would have faced a maximum prison sentence of five years.

An appeals court upheld Williams' conviction, but the state's highest court ruled that it was excessive.

"Prosecutors must walk a fine line when making comparisons, whether implicit or explicit, between a defendant and an individual whom the jury associates with violence or guilt," Supreme Court Justice Lee Solomon wrote in the opinion.

"The use of a sensational and provocative image in service of such a comparison, even when purportedly metaphorical, heightens the risk of an improper prejudicial effect on the jury," he continued.

"By recognizing that the prosecutor’s comparison of Mr. Williams to a horror movie villain tainted the fairness of the trial, the court did the right thing in reversing Mr. Williams’s conviction," Gifford said.