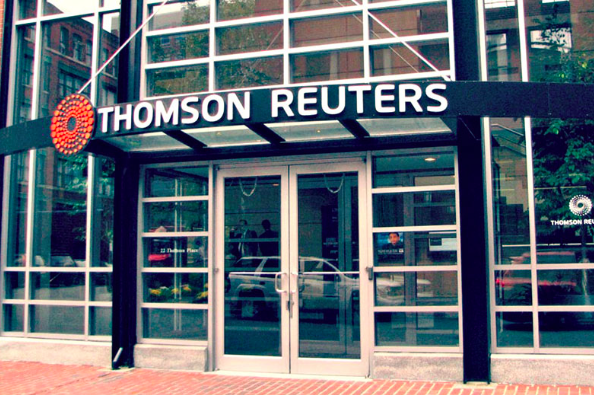 Multinational mass media and information firm Thomson Reuters announced Monday that it will sell its Philadelphia-based intellectual property and science division, as well as several other global assets, to a pair of private equity firms for $3.55 billion.

The pending sale, which includes the company's patent, trademark, copyright and brand business, was confirmed by Toronto-based Onex Partners LP and U.K.-based Baring Private Equity Asia, according to the Philadelphia Business Journal.

Approximately 300 of the IP&S division's 3,200 employees worldwide have been working out of the company's headquarters at 15th and Spring Garden streets. The portfolio involved in the sale covers Web of Science, Thomson CompuMark, Thomson Innovation, MarkMonitor, Thomson Reuters Cortellis and Thomson IP Manager.

The unit was put up for sale earlier this year after the company, a leading provider of news and information services, decided to take action to stabilize its core businesses, the Wall Street Journal reports. The division serves a mix of governments, universities and companies.

“With the completion of this divestiture, Thomson Reuters will be even more focused on operating at the intersection of global commerce and regulation,” said Chief Executive Jim Smith.

Previously, Thomson Reuters sold Thomson Healthcare, now Truven Health Analytics, to Veritas Capital for $1.25 billion in 2012. Both units formed the company's Legal division. Operations in Tax & Accounting and Financial & Risk, which generates about half of total revenue, span more than 60,000 employees in 100 plus countries.

Reuters News, reporting on its parent company, said the IP&S division accounted for about 8 percent of Thomson Reuters total revenue of $12.2 billion in 2015. The company plans to use $1 billion from the sale to buy back shares and direct the rest toward paying down debt and reinvesting in the business.

There was no immediate word on the status of the company's Philadelphia employees.