Three lessons on love in 'The Last Jedi'

A wholeness that transcends and includes both sides of the force 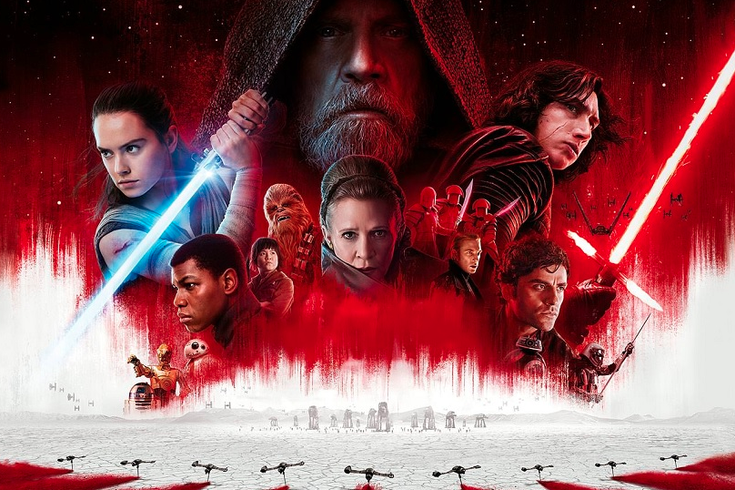 I write about Episode VIII: "The Last Jedi" as a scholar of comparative religion, a hospital chaplain, and a birth doula.

Holding Space for both birth and death offers ample opportunity to reflect upon sorrow, regret, wonder, and (especially) love. As an avid "Star Wars" fan, I believe insights about love can be culled from the unfolding saga that took place "a long time ago in a galaxy far, far away." Below are three lessons for us all.

*If you have yet to see "The Last Jedi," note that spoilers from the film are presented below.

RELATED READS FROM AMY WRIGHT GLENN: So, you want to hire a death doula? | How to move away from shame-based parenting | Affirming the value of truth for our children in an age of dishonest politics

Lesson #1: When we can't own all aspects of our story, we lie.

We expect lies from characters like Snoke. For example, I’m not convinced that he was the one to bridge the minds of Ben and Rey – after all, they continue to see each other clearly through the force following Snoke’s demise. A force much greater than Snoke’s understanding bridges these two, yet Snoke takes credit for it because he can't admit that he's not in control. When Ben awakens after the struggle-to-posses-the-lightsaber implosion with Rey, he lies to General Hux saying: "The girl killed him (Snoke).”

To admit that he killed their Supreme Leader in order to protect Rey would be to reveal far too much about his heart. Luke lies to Rey when he tells his first version of the "What happened to Ben Solo?" story. He leaves out the central turning point because it is a direct window into his shameful failure as a teacher.

Even Rey lies in the story, albeit only to herself. When she encounters the cave of shadow energy on Ahch-To, she doesn't resist what it has to teach her. She enters it willingly, hoping to see who her parents are. Yet, she ends up looking in a mirror and feels completely alone. Why? She already knows the truth, but she doesn't want to see it. She is standing in her own way, blocking her ability to see through her reflection. Ben knows this, just as she knows his heart.

The lesson here is that we are all a mix of light and shadow. Both sides of the force can offer us insight and are woven into our human nature. When we can't own all aspects of our being or when we hide our shame and limitations, we lie -- even if “only” to ourselves.

Lesson #2: It is through fearless humility that we heal into wholeness

Luke is beyond devastated by his failure as a teacher. He profoundly betrayed his sister's trust by nearly murdering the nephew he had pledged to train. And certainly, he betrayed Ben. When a young Ben Solo awoke from sleep with his beloved teacher/uncle standing over him like an executioner, his fear and anger were unleashed. The lesson internalized: I'm struggling inside and must, therefore, be evil. Even my Jedi master wants me dead; I must be "a monster." Luke saw the worst in Ben and he feared him, far too much. He taught his students (including Rey) to "resist" the call of shadows. But since we are all a mix of both light and shadow, the path to wholeness is one of embracing both with fearless humility. Ironically, it is through befriending our inner darkness that we can firmly anchor in "the light" -- a lesson Luke, himself, learns near the end of the film.

Ben Solo has his own path to walk and Luke's fear led to an attempt to control Ben, assuming (wrongly) that he had already turned. When Luke does prepare to face Ben at the end of the film, he has recognized this. He tells Leia: "I can't save him." Indeed, no one can -- not his mother, his father, and not even Rey.

Ultimately, Ben owns his struggle and he is responsible for the choices made along the way. Ben must "save himself," should he decide to honor the love and compassion that live in his heart and embrace the wholeness he intuits. After killing Snoke, he assumes correctly that this wholeness transcends the dualities of Jedi/Sith and Empire/Rebellion. But Ben only wants to transcend these structures because they have caused him profound pain. He doesn’t (yet?) resolve to do the inner work to integrate these structures – for wholeness both transcends and includes its parts. And just as a love struggling to emerge lives in Ben, oft hidden failure and shame live in even the greatest of Jedis. Yoda sees this and speaks with humility, and a surprising levity, about it. He helps Luke embrace his dark past. We learn from failure.

"The greatest teacher -- failure is," he states. Given the triumphant rise of Palpatine under his leadership, Yoda would know.

The lesson here is to embrace our whole selves with humility, honesty, and perhaps even some humor. Think of the symbol of the yin and yang from Taoism. Even in great light, there is an element of darkness. Even in great darkness, there is an element of light. The wholeness. We embrace this wholeness and transcend/include duality when we invite all aspects of ourselves home to the proverbial table.

We are wise to protect what we love. Rose articulates this truth after saving Finn's life in the final battle of "The Last Jedi." Rather than being hell bent to fight what we hate -- a path that will destroy us -- we are wise to turn our energies to love.

It is love (in the form of compassion, at this point, perhaps more later) that compels Rey to reach out to Ben. She extends her hand after they pledge that neither faces his or her plight alone. Ben won’t leave her alone in her darkness and she won’t leave him alone in his light. Ben responds by taking off his glove before reaching out, touching her with the truth of his unveiled heart. This act allows them both to see into each other -- to see that in the dark there is light (Ben will overturn Snoke out of his compassion for Rey) and in the light there is dark (Rey has been lying to herself about her parentage).

When Rey journeys to Snoke's ship to see Ben, she isn't motivated to board the ship to fight what she hates, not at all. She is motivated by a love for the good that still lives in Ben -- a good that she knows will lead to Snoke's destruction. Rey undergoes a death and rebirth along the way, symbolized by the coffin-like capsule she rests in on her journey from the Falcon to the Snoke’s ship. She will face, acknowledge, and integrate her self-delusion. She will face “her greatest weakness” -- because she loves.

When Rey refuses Ben’s offer to "rule the galaxy” with him, she does this not because she has bound herself to rigid rules of a soon-to-renew Jedi order. She already had moved beyond the "resist the dark side" protocol of Luke's teachings. She isn't afraid of Ben; she hasn’t resisted him. After all, she looked him in his eyes as he was ordered to execute her with a trust that he would not do so. And he didn't. Rey has held Ben's hand before, but again, it wasn't gloved, and she was the one reaching out. (Love is strong enough to honor shadow -- shadow is integrated through love.) And certainly, they made for a truly unmatched and remarkable duo when on the same side in combat. Yet, Ben's heart, while awakening, is still clouded, symbolized by his extended, gloved hand.

While Rey has accepted her profound sorrow about her parents and prior self-deception, she knows she isn't a "nobody.” And Ben isn't the only one who sees otherwise. Her friends fighting in the resistance love her, and she loves them. Love motivates Rey. Yes, she cares deeply for Ben, but he still has an incredible amount of anger, shame, and inner anguish to integrate – specifically the memory of murdering his father. He wants out of the binary visions of light and dark because integrating both will be a painful journey of reckoning for him. Rey has already done her reckoning, her symbolic death to an old self and rebirth to an integrated and whole self. Furthermore, her friends are being killed, now. So go, she must.

Finally, it is love that motivates Luke and enables him to transcend and include a haunting memory. Leia knows her brother failed; nonetheless, her love for him is vast.

"I'm just glad to see you," she tells him at the end of the film. Luke admits his failure to himself, Rey, Yoda, Leia, and then, most importantly, to Ben.

He apologizes -- something one can't begin to imagine those primarily rooted in shadow would do. By coming to embrace his failures and seeing them as great teachers, Luke no longer fears the darkness in his fallen student. In fact, he follows in the footsteps of Yoda who doesn't reject Luke for his failings. And that is the key. Luke pledges (even if Ben should strike him down in anger) that he will remain by Ben’s side, just as Han Solo remains by his son’s side. Whether this will matter to Ben remains to be seen. He may become so engulfed by shadow that he is blind to the movement of light in his presence. After all, it was such a hubris that led to the ending of Snoke.

The lesson here is simple. Love is what calls us to wholeness, to accept our own failings and those of others. Love recognizes that in the darkness there is light and in the light there is shadow – something that even the greatest characters in "Star Wars" have struggled to see. Love inspires us to move with compassion, in spite of it all. When we apologize for our wrongdoings and forgive others for their trespasses, we embody the encompassing and healing power of love.

Should we hope to live an integrated, whole, and meaningful life -- to die with "peace and purpose" as Luke does at the end of the film: we must love. We are wise to trust the promptings of love as we open ourselves with humility to our darkest hour -- and root ourselves firmly in love’s transformative power.