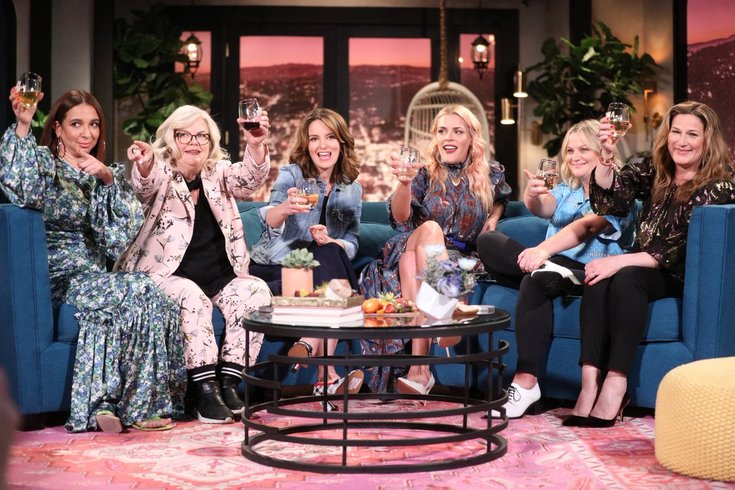 Tina Fey and a crew of her former SNL co-stars were guests on "Busy Tonight" on Monday, promoting their new Netflix film "Wine Country."

The half-hour, late-night show on E! began with host Busy Phillips asking the "Saturday Night Live" alums about their favorite sketches to perform together. Fey was joined on the show by Amy Poehler, Maya Rudolph, Ana Gasteyer, and Paula Pell.

Fey said, "This never aired, but do you remember when we had to dance in trench coats behind Bernie Mac?" Rudolph replied, "Do I?"

The group played the drinking game "Sip-Perlatives," and Phillips quizzed the women about who's more likely to take a joke too far, and Fey and Pell were the overwhelming choices. Poehler said of Fey, "I would just say, in a good way, because she's such a joke master. To be good you must find your line."

"And then cross it," Fey added.

"When you're amongst other funny people you tend to get dark quick. So, we like to go deep. And this one," Rudolph said of Fey, "this one's a real Columbo."

Fey is executive producer of "Busy Tonight." The show was canceled by E! earlier this month, and the last episode is set to air Thursday.

Watch clips of Fey, Poehler and the rest of the guests below.