The cop car's dash camera caught the frightening incident on video; no one was injured 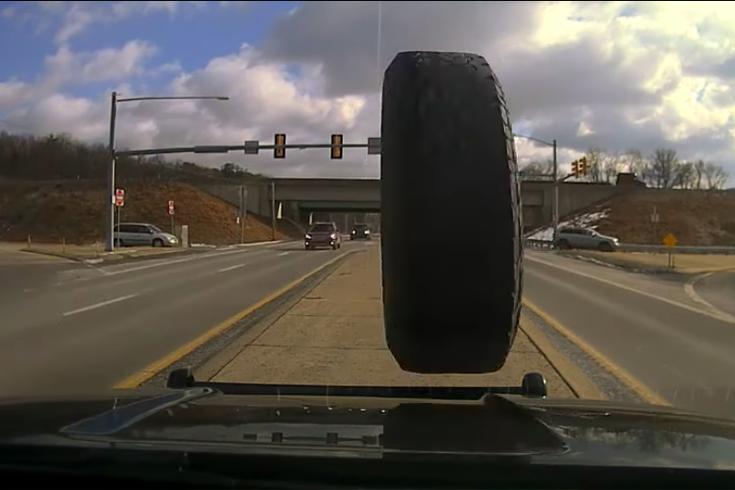 Two Spring Township police officers narrowly avoided injury Monday when a runaway tire slammed into the windshield of their patrol car while they were monitoring traffic near Bellefonte in Centre County. The incident was captured on video, which shows the tire bouncing down the road and onto the cruiser.

Two police officers in Central Pennsylvania narrowly avoided injury Monday when a runaway tire slammed into the windshield of their patrol car.

The incident was captured on the cruiser's dash camera, which shows the tire bouncing quickly down a busy road before striking a curb, catching air and bumping off the car's hood into the windshield.

Watch the moment a runaway tire smashed through the window of a police cruiser in Bellefonte, Pennsylvania.

Both officers in the car were not injured in the collision, the Spring Township Police Department chief said. pic.twitter.com/bTBuiPAGiP

After hitting the patrol car, the tire bounced onto the other side of the road without hitting any other vehicles.

The two officers were uninjured, but their vehicle suffered serious damage, Spring Township Police Chief Adam Salyards told the Centre Daily Times. He was not sure how much repairs would cost.

The driver of the pickup truck was not issued a citation because the incident was a "freak accident," Salyards said.

One of the officer's body camera caught another angle of the incident.

This is an inside view of the cruiser as the tire smashes into the windshield. Notice the glass shards that encapsulate the interior of the vehicle. We are very grateful both officers were okay!

The officers, who were inside the vehicle when the incident happened, were monitoring traffic from a median on the 1300 block of Zion Road near Bellefonte, Centre County when the rear, driver-side wheel of a pickup truck became detached as it was driving westbound.

Incidents like this are rare, but it was not the first time a tire has spontaneously popped off a vehicle on a Pennsylvania roadway.

Back in 2012, a tire came off a tractor trailer driving along I-76 in South Philadelphia. It hit a Honda Accord before it was launched across Vare Avenue. It ultimately crashed through the roof of the Philadelphia Housing Authority's Workforce Development Center, which had to be evacuated.

The driver of the Accord was taken to the hospital, but the truck driver didn't realize he had lost a tire until he arrived at his destination in New Jersey. After he realized he was missing one and heard news reports about a runaway tire in Philadelphia he made contact with the Pennsylvania State Police.