Twitter: it’s where you yell at people you think are wrong, and talk about sports. With the NFL playoffs in full swing, everyone’s been taking their best shots at guessing who wins this year’s Super Bowl, which takes place in just 23 (!) days.

The folks over at Fresh Mechanism, a marketing and data research firm, dug into geotagged tweets from the past week — it says it combed through more than 100,000 tweets — and put together a map of which team each state believes will win it all.

Eagles fans, it seems the country is pulling for the Birds: 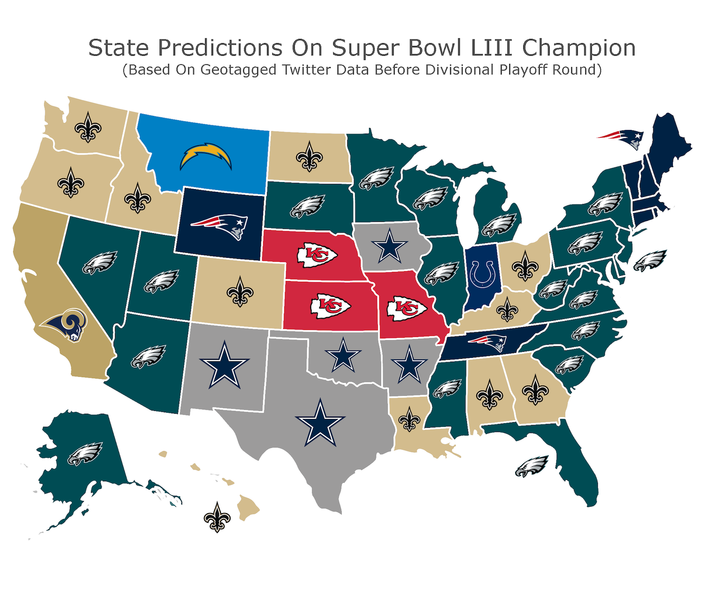 Twenty states think the Eagles win the Super Bowl. Pulling 40 percent of the vote when your team represents just 12.5 percent of the field is pretty good.

Another way to look at it? Election-style.

Sports Editor Evan Macy remarked that the Eagles were so well-represented on this map, they might have enough votes to win the Electoral College. It's Friday, so we did the math.

(In states where electoral votes can be split up, we assumed the team carried the entire state.)

Unfortunately, a candidate technically needs 270 votes to win the United States’ Presidential Election outright, and the Eagles fall four possessions short. They rack up 241 electoral votes on the map, so they would have to rely on a House vote to gain office.

The good news? No other team garners 100.

The Saints, the Eagles’ opponent this Sunday, would finish second in the voting by receiving 98 hypothetical votes in this map. The Cowboys finish third, thanks in large part to Texas, and the Rams finish fourth thanks to their sole elector, California.

Here’s the final polling from "CNN":

My favorite part of this map is absolutely Montana going all-in for the Chargers. Maybe they like Philip Rivers’ bolo ties.