By the social-media numbers: Boycott NFL vs. Take a Knee

An online-betting website has crunched a month’s worth of Twitter data to determine which states were home to the most users who used the hashtags #takeaknee (or #taketheknee) versus #boycottnfl (or #boycottthenfl).

It was BetOnline.ag’s way of getting a sense of where people stand on the heated national anthem-protest issue.

“Obviously, this is a hot-button issue, but it’s also a sports issue, so they felt that it was still appropriate for a site like them to take on the subject,” said Ryan Taylor, who helps the site with their public relations efforts.

“The two hashtags have come to be the antithesis of one another,” he continued. “The nation seems to be almost equally divided on the issue, much like the presidential election.”

He based that latter assessment on the fact that 51.6 percent of the applicable tweets support a boycott while 48.4 percent back NFL players who choose to take a knee during the national anthem.

How the states are ranked is based on the difference between boycott and take-a-knee tweet volume.

Among #takeaknee states – where that hashtag appeared more often than the boycott-related ones – Pennsylvania had the 10th-most tweets while New Jersey and Delaware came in 15th and 20th, respectively. (The top three are California, Illinois and Oregon.)

The top three #boycottNFL states are Florida, Maine and Texas.

Taylor noted that more than one million Tweets factored in to the effort, made possible by trend-mapping software that has direct access to geotagged Twitter data.

Below, you can see BetOnline's map as to which states featured which style of Tweets more often than the other. 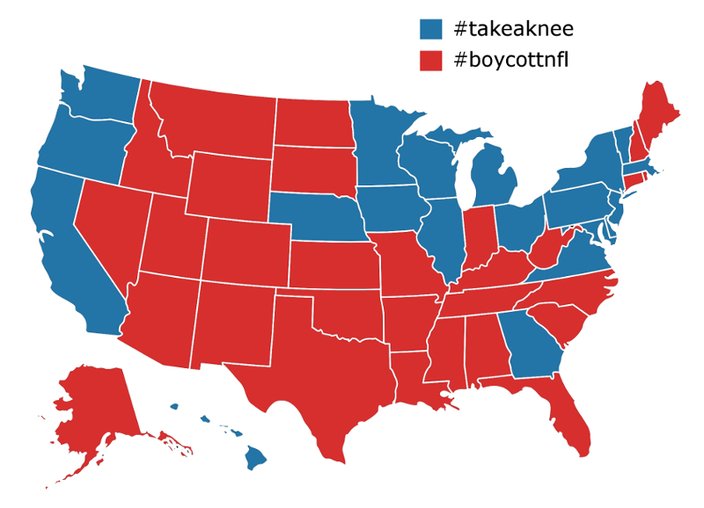 An online-betting website crunched Twitter-hashtag data to determine states where more people want to boycott the NFL vs. those who support players protesting during the national anthem.