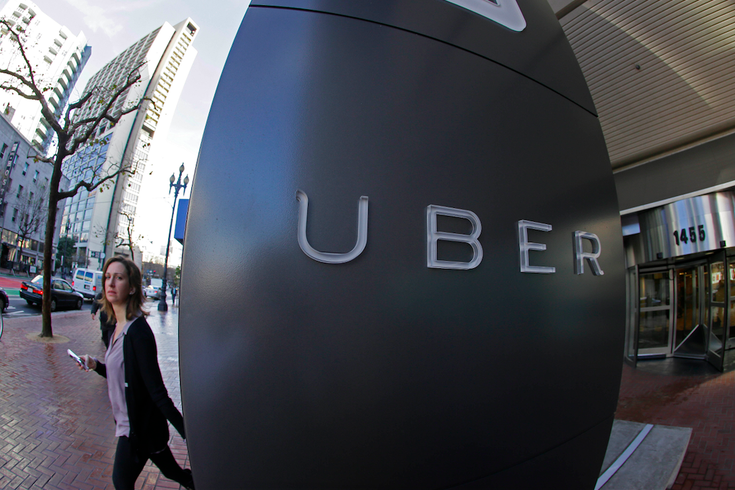 In this Tuesday, Dec. 16, 2014 file photo, a man leaves the headquarters of Uber in San Francisco. Drivers for Uber and other companies most often are considered independent contractors who are self-employed. Rather than receive a W-2, they’ll get a 1099 form reporting their income.

Uber drivers in the San Francisco Bay Area are threatening to shut off their apps on Super Bowl Sunday in response to a series of fare reductions that took effect at the start of the year in cities across the United States.

The threat marks the latest salvo in an escalating standoff between the popular ride sharing service, based in San Francisco, and the drivers who are employed by the company as independent contractors. According to Wired, the movement to boycott the Super Bowl gained steam in online forums and social media threads following a caravan protest on Monday, when a group calling itself "Uber Drivers United" – totaling about 100 cars – slowly idled from Candlestick Park to San Francisco International Airport.

An online flyer calls for San Francisco's estimated 40,000 Uber drivers to log off Sunday to protest the city's 10 percent post-holiday fare cut and 20 percent cuts in the East Bay and South Bay, among several other grievances.

Uber has explained the cuts as a response to seasonality, giving riders an incentive to use the service more frequently during the slow time of year. Similar fare cuts have been implemented by competing ride share service Lyft.

Harry Campbell of The Ride Share Guy, a blog about working in the transportation network industry, says the recent protests are largely about drivers gaining more say in the decisions that affect their intrinsically variable wages.

Uber cutting prices and telling drivers it’s good for them—it just seems to be rubbing salt on the wound, because not a lot of drivers feel like that. I think you’d be hard-pressed to find a driver who’s making more today than they were two or three years ago.

Last September, UberX said its New York City drivers earned an average gross of $39.30 per hour that month, though the company is known to withhold information on earnings data.

The protests have not been limited to California. On Medium, a group called Uber Drivers Newark posted a critical open letter to CEO Travis Kalanick and his investors, calling their statements on driver earnings "blatant lies" and requesting a meeting to address outstanding issues. On Monday, at the company's Long Island City headquarters, 400 drivers gathered to denounce the city's 15 percent fare cut.

The possibility of a Super Bowl strike is particularly sensitive for Uber after the company secured an official partnership with the Super Bowl Host Committee, providing them an exclusive lot and lounge nearby Levi's Stadium in Santa Clara.

A looming class action lawsuit against the company over the employment status of its drivers is set to begin June 20, 2016.