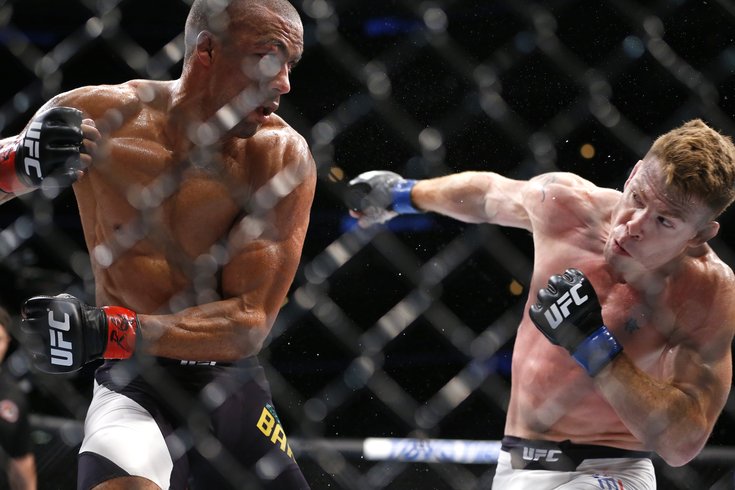 Paul Felder, right, trades punches with Edson Barboza during the bout in July.

What Paul Felder wants most right now is as clear as water.

Three letters, written each day on a round plastic canvas, serve as a constant reminder of the fighter's true goal. It's short and simple, but not unique; every fighter on the card at UFC 191 -- including Felder's opponent Saturday night in Las Vegas, Ross Pearson -- is after the same thing.

"I want to win," Felder told PhillyVoice. "I write it on my water bottle every day. 'Win.'"

And until his fight with Edson Barboza in late July, it was the only result the 31-year-old lightweight had known since turning pro in 2011. Felder, who replaced an injured Myles Jury on short notice, lost that fight by unanimous decision, dropping his professional record to 10-1 (2-1 UFC).

“The fight itself went well," Felder said of his first professional loss. "It was a close fight. The judges didn’t see it my way. I saw it differently."

Even though the Philly native thought he won the fight, which won "Fight of the Night" honors at UFC on FOX on July 25, he's willing to accept some of the blame.

"Maybe I got a little complacent," he admitted. "But I learned my lesson."

On Saturday night, when he faces Pearson (17-9; 8-6 UFC), he'll be fighting for the first time in his professional career, and just the second time in his life, coming off a loss. And while the training schedule has returned to normal -- because of the short notice, he was unable to join fellow lightweight Donald Cerrone at BMF Ranch outside Albuquerque -- there's something extra there.

"One hundred percent, I don’t want it to [go to the judges]. And if it does, I want it to be pretty freaking obvious [I won]."

“I came into [camp] pissed off," Felder said. "But also knowing that even if I put on another great performances for the UFC, you don’t want lose two in a row. 'Fight of the Night,' other bonuses like that, they don't matter."

Pearson, who won Season 9 of "The Ultimate Fighter" brings a different challenge that Barboza. He's shorter, hits a little harder and doesn't often leave the outcome of his fights up to the judges. Six of his last eight fights were ended by knockout, four by Pearson and four by his opponents.

And after losing what he thought was a tight decision last time out, Felder wants to make sure, one way or the other, that he controls the outcome.

"One hundred percent, I don’t want it to [go to the judges]," he said. "And if it does, I want it to be pretty freaking obvious [I won]. He’ll throw some hammers, so we don’t want to get into a pitching exchange. I want to hit him hard. Move. Hit him hard again."

Combine that with Pearson's recent history of avoiding decisions, and Felder could find himself part of the most entertaining fight on the card ... again.

In addition to the Barboza fight-night bonus, he also scored an early contender for "Knockout of the Year" with this spinning backfist against Danny Castillo in January.

[via The Big Lead]

That no-look knockout also earned "The Irish Dragon" a bonus for "Performance of the Night" and won the UFC mid-year award for top knockout.

Perhaps Felder's flair for the dramatic comes from his background. He studied acting at the University of the Arts, where he graduated from in 2008. He's always been craving that attention, as he readily admitted to PhillyVoice earlier this year:

"I just remember wanting that attention," he added, laughing out loud as he realized the truth behind that statement. "Unfortunately, and vainly enough, that's kind of been the driving force of my existence. 'How can I get more attention?'"

"I like being in front of people live and performing for them. And fighting is that," Felder said. "So I kind of just found a way to kind of combine both passions in my life. Luckily enough for me, it's kind of amazing, I like performing and -- to be honest -- I like fighting. I like getting hit.

"A part of that was missing when I was acting. There was still an aggressive, violent side of me that I had to find a way to control. ... It's kind of amazing to do that in front of 15 to 20,000 people."

Felder hasn't acted recently, however, unless you count his performances in the octagon, but said he plans to take some time off after this fight -- it's his second in six weeks -- and added that he wouldn't mind picking up some side work in his down time.

But before he can even look forward to that, he has a fight to prepare for, one he promises will be entertaining.

"I don't see how this could be a boring fight," Felder said. "Whether it ends in the first or goes all the way -- even if I have to get my face beat in -- it's going to be a hell of a fight."