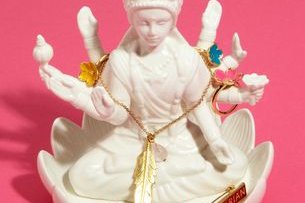 Urban Outfitters drew criticism for selling a jewelry stand in the shape of a Hindu goddess.

Urban Outfitters is once again facing criticism for its use of Hindu religious imagery in a product.

The Philadelphia-based company pulled a jewelry stand in the shape of a Hindu goddess 12 hours after complaints from the Universal Society of Hinduism, the Philadelphia Business Journal reported.

This is the third time the company has offended Hindus. It came under fire for printing the image of the god Ganesha on socks in 2013 and on bedcovers in 2014.

We urge #UrbanOutfitters to withdraw #Hindu goddess #JewelryStand, as goddess is meant to be worshipped and not for holding "rings + things”

The description of the item, according to Zed's website, called the Lotus Jewelry Stand "perfect for holding all your rings + things" and an "enlightened white ceramic storage solution shaped like Durga in a blooming lotus flower."

The jewelry stand was actually in the shape of the goddess Lakshmi, Zed corrected.

He thanked the company after the item was removed but also urged Urban Outfitters to train its senior executives in religious and cultural sensitivity.

Thanks #UrbanOutfitters for understanding #HinduCommunity concerns by removing product trivializing Hindu deity within 12 hours of #protest.

Various pins on Pinterest show that the item had been available for sale for at least the past nine months.

Other Twitter users have also complained about the store's use of religious symbols.

@evemason_ I'm not particularly religious either but it's just quite ignorant . This is one of the Gods... pic.twitter.com/AU8nXQaou3

I know this is nothing new, but if @UrbanOutfitters could not co-opt Hindu mantras to sell swimsuits, that'd be great pic.twitter.com/N0aBVpVFve

The Ganesh T-shirt is currently sold out, according to the Urban Outfitters website. The tank top with the mantra "om shanti shanti om" is no longer available on the company's website but was previously sold under the "spiritual gangster" line.