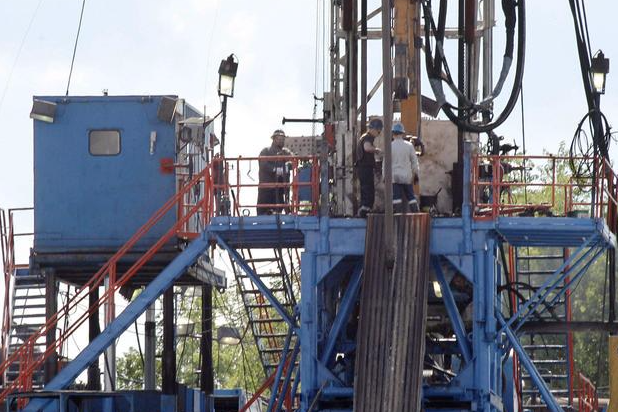 After three years of consideration, the Obama administration announced on Friday new rules for hydraulic fracturing operations on federal lands.
The new regulations, set to take effect in June, will require oil and gas drilling companies to disclose within 30 days the chemicals used in a fracking operation. Companies will also be required to meet updated rules for well construction and the disposal and storage of fluids used in the extraction process.
Though major in their scope, in practice the regulations could be more symbolic than disruptive to the oil and gas industry, which has experienced a boom in the past decade despite heated controversy over the public health risks and environmental safety of fracking.
According to Forbes, of the 700 million acres of minerals managed by the Interior Department's Bureau of Land Management, only 35 million are leased for oil and gas and only 13 million are currently producing from about 100,000 well bores. With plenty of options on both state and private lands, companies will largely be able to work around the new regulations.
Even so, reaction to the announcement has been immediate, with 27 Republicans introducing legislation to block the regulations and two industry groups suing to challenge them, Politico reports. On the other end of the spectrum, some environmental groups have also responded critically, suggesting that the rules may be too lenient.
Interior Secretary Sally Jewell said the reactions were not surprising, but explained the need for an overhaul.

“Current federal well-drilling regulations are more than 30 years old and they simply have not kept pace with the technical complexities of today’s hydraulic fracturing operations,” Jewell said in a statement. “This updated and strengthened rule provides a framework of safeguards and disclosure protocols that will allow for the continued responsible development of our federal oil and gas resources.”

Pennsylvania, one of the country's leading natural gas producers, does not currently have any drilling rigs on federal lands. The state is, however, one of at least 14 in the U.S. with chemical disclosure requirements through FracFocus.org, a tool for public information about the chemicals used in fracking fluids.