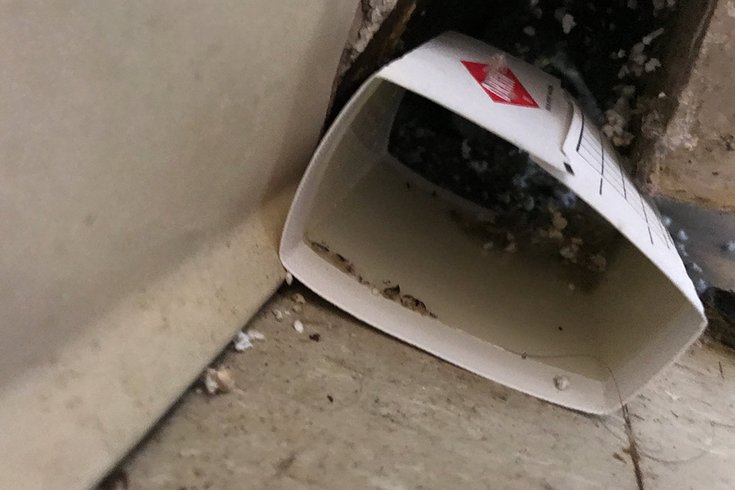 Lucy Gardner found two glue traps in her father-in-law's room at Dresher Hill Health and Rehabilitation Center in Upper Dublin Township, including this one, which was littered with mouse droppings.

But Lucy Gardner was horrified when she surveyed the room given to her 73-year-old father-in-law, Charles Gardner, a U.S. Army veteran of the Vietnam War who briefly stayed at Dresher Hill late last month.

Gardner said she found evidence of rodents in several areas of the facility in Upper Dublin Township, Montgomery County.

There were mice droppings behind a bedroom dresser, in the bathroom and in the dining area. Mice shreddings sat on a windowsill and on the floor. She also observed droppings in the corner of a second-floor therapy room.

Additionally, two glue traps were placed on the floor in her father-in-law's bedroom, including one at a hole in the wall stuffed with an apparent steel wool pad.

Within a couple of stressful days, Gardner managed to place him in another nursing facility, with the assistance of the office of state Rep. Todd Stephens, R-151. She also filed a complaint with the Pennsylvania Department of Health.

"It looked like it wasn't cleaned in forever," Gardner told PhillyVoice about her observations at the facility. "They must have a lot of mice."

Dresher Hill is a 118-bed nursing facility that provides an array of health care services, including post-acute services, skilled nursing services and restorative and long-term care.

When Gardner arrived on Aug. 28 to remove Charles, 73, from the facility, she said a health inspector was scouring his room. But Dresher Hill staffers had spent the previous night cleaning the room beneath flashlights and removed much of the evidence, Gardner's father-in-law told her.

Still, Gardner said the health inspector found mouse droppings behind a dresser and in the bathroom. Plus, Gardner had taken photos and video documenting the uncleanliness of the room, which also allegedly included a grimy bathroom, unclean equipment and dirty streaks along the walls.

Gardner said a couple of Dresher Hill employees told her that the two-story facility at 1390 Camp Hill Road has a significant mice problem. One patient even joked about having a pet mouse, she said.

"There are people who can't talk and walk," Gardner said. "The thought of a mouse running across a person who can't move or can't get it off of them – it's so gross." 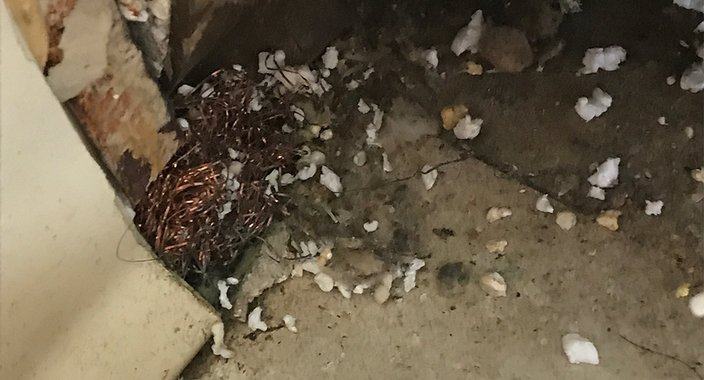 A steel wool pad blocks a hole littered with mice shreds in a bedroom at Dresher Hill Health and Rehabilitation Center. A glue trap sits nearby.

Since the beginning of 2016, 17 patient care complaints have been filed against Dresher Hill, according to state records. Only three of those complaints resulted in citations.

None of those citations were related to Gardner's complaint, nor did health inspectors deem their severity to have resulted in actual or serious harm to patients.

Whether the Department of Health will cite the facility for Gardner's complaint remains to be seen.

The Department of Health does not publish patient care complaints – or any citations that ensue – until 41 days after an inspection is made. Department officials cannot confirm any inspections at Dresher Hill or comment on any findings until that time, a spokesman said.

The nursing home was cited on Oct. 7, 2016 for failing to provide "an environment free of objectionable odors" on the second-floor nursing unit, where a strong odor of urine was prevalent outside several rooms.

The citation was made when health inspectors completed surveys for Medicare and Medicaid recertification, state licensure and civil rights compliance. The issue was corrected, according to a revisit survey conducted six weeks later.

Officials from Dresher Hill as well as Oak Health and Rehabilitation Centers, the nonprofit organization that manages the nursing facility, did not comment when given opportunities to respond to Gardner's complaint.

A staffer at Dresher Hill instructed PhillyVoice to contact Oak Health officials at the nonprofit's address in West Palm Beach, Florida. A staffer there declined to comment, saying she did not handle matters regarding patient care.

"I will get back to you with a name (to contact) if I can provide one," she said. No further response came. 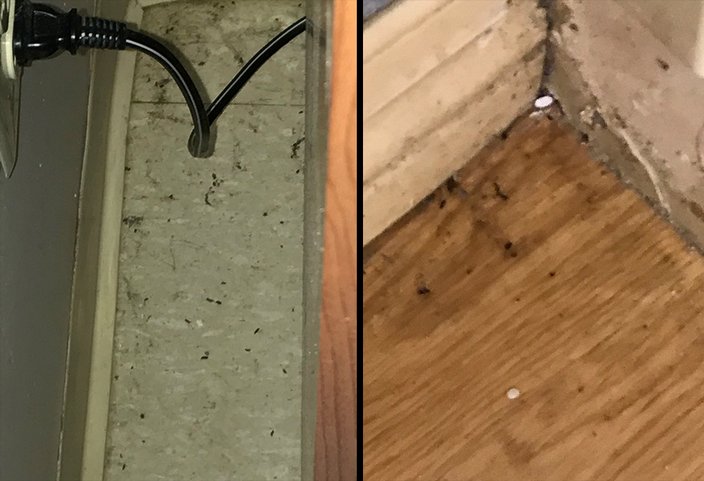 Mouse droppings are visible, left, behind a bedroom dresser in Charles Gardner's room at Dresher Hill Health and Rehabilitation Center, as well in a therapy room on the second floor of nursing home.

The state Department of Health has begun fining nursing homes more often, with Oak Health facilities accumulating $121,450 during the first quarter of 2017, according to a report by Philly.com. But Dresher Hill has not been fined, according to state records.

Stephens, whose legislative district covers parts of eastern Montgomery County, said he contacted state Secretary of Health Karen Murphy after Gardner reached out to him via social media. His chief of staff, Tim Ward, then helped Gardner file a complaint and find another facility that would accept her father-in-law.

"It was obviously concerning," Stephens said. "Nobody would want a loved one living in those conditions, in those circumstances. I'm glad she brought it attention. I'm glad the process is working to make sure those concerns are being corrected."

Gardner is still working to secure a long-term housing option for Charles, who has been in-and-out of hospitals and rehab facilities since falling ill with pneumonia last October. Charles, a Baltimore resident, since has battled bouts of sepsis and clostridium difficile, Gardner said.

He is currently at Luther Woods Nursing and Rehabilitation Center in nearby Horsham, but Lucy Gardner said his Medicare benefits are nearly exhausted.

Gardner does not know what the future holds for Charles. But she is relieved to have gotten her father-in-law out of Dresher Hill, where she alleges he also didn't receive all his medication.

"If I wasn't there," Gardner asked, "What would have happened?"