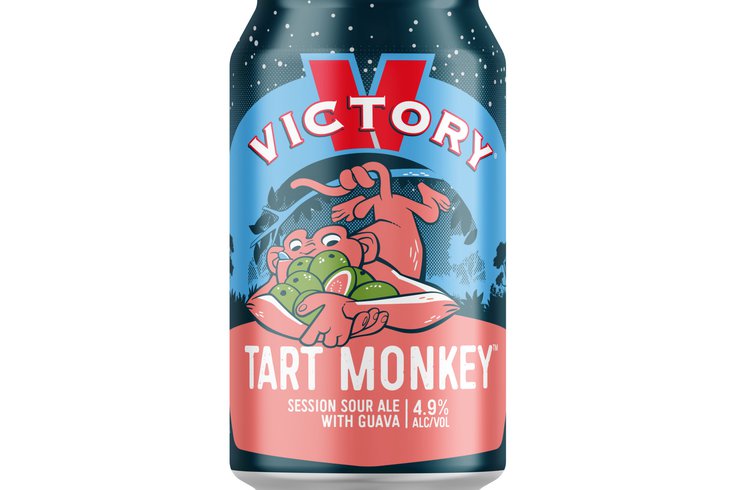 Things can be so serious these days — and really, what isn't there to worry about? Special shoutout to the coronavirus.

Victory Brewing Company wants to lighten the mood a bit with a comedy tour supporting its newest concoction — a delicate ale that joins its collection of monkey beers.

Tart Monkey, a session sour ale with a hint of guava, lightens the load with a 4.9% alcohol by volume. It's a playful cousin to the Sour Monkey tripel, which sports a 9.5% ABV.

Brewed with Belgian yeast, the beer will launch later this month as part of Victory's "Mystical Monkey" mixer pack, which includes Golden Monkey, Twisted Monkey and Sour Monkey. It also will be available on draft.

The Chester County brewery is sending its monkeys out on a comedy tour with Mekki Leeper, a Philadelphia native and Temple University graduate. The comedian, who now lives in Los Angeles, has been featured on Comedy Central's "Control Room" and "The Late Late Show with James Corden."

The "Let the Monkeys Out" tour will open March 26 at the Helium Club in Center City on March 26 before making stops in Washington, Brooklyn, Pittsburgh and Boston.

"The Monkeys have an innate light-hearted personality to fuel the fun and encourage drinkers to stop taking life too seriously," Victory co-founder Bill Covaleski said in a statement. "At the end of the day, our goal is to create delicious beers that help our customers escape the stress of everyday life and to transport them to a place of content."

In keeping with the lighter side of things, the "Victory Monkeys" now have their own Instagram and Twitter accounts. They aim to distract social media users from life's biggest concerns – like New Jersey confirming its first coronavirus case.

All four beers will be available at Victory's taproom locations in Downingtown, Kennett Square and Parkesburg. Consumers also can search the company's beer finder to find a retailer nearest them.

The brewery also plans to open a 14,000 square-foot taproom and brewery in Logan Square, located at 1776 Benjamin Franklin Parkway, by the end of this year.