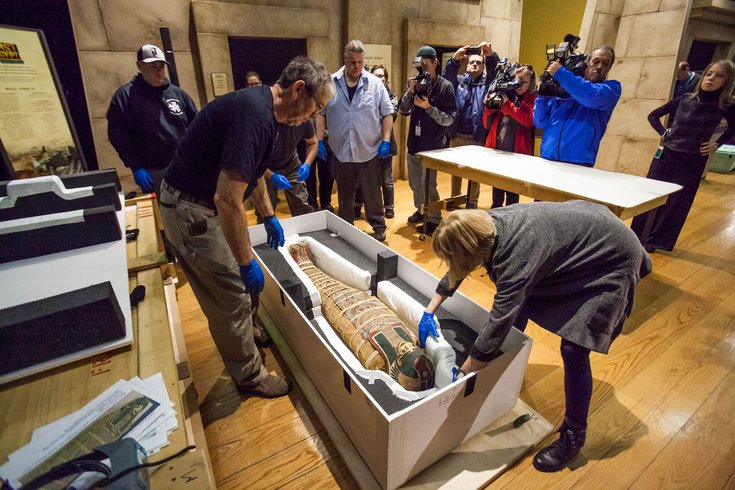 Terry White, left, Traveling Exhibit Supervisor for the Center of Science and Industry, and Mimi Leveque, Conservator from the Peabody Essex Museum in Salem, MA. unpack Annie, a 2,000-year-old mummy from a shipping crate at the Franklin Institute in during the installation of the Lost Egypt exhibit, Tuesday, January 26, 2016.

The Franklin Institute will open the new exhibit "Lost Egypt: Ancient Secrets, Modern Science" on Saturday, Jan. 30. The interactive display brings a human element to a culture thousands of years old by giving Annie the mummy a spotlight.

The Egyptian mummy, on loan from the Academy of Natural Sciences of Drexel University, easily becomes a real person for viewers and not just a relic of 200 B.C.

"One of the things I love, you can see she's wearing little thong sandals, you know, flip-flops, just like anyone would wear now," Mimi Leveque, conservator of objects at the Peabody Essex Museum in Salem, Massachusetts, said while examining the mummy for travel damage at The Franklin Institute. 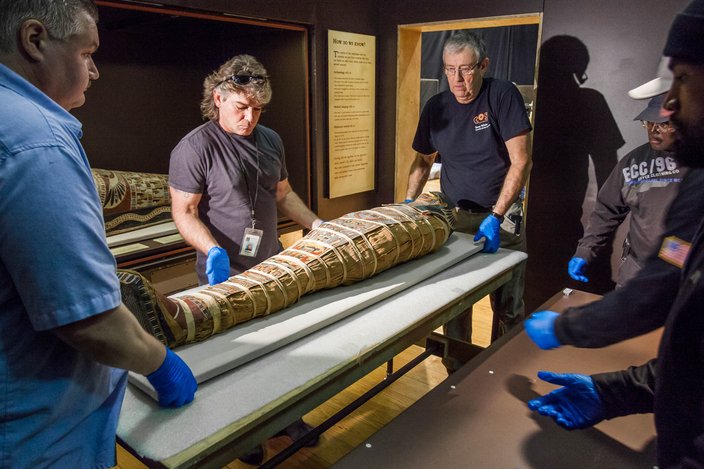 Terry White, Traveling Exhibit Supervisor for the Center of Science and Industry, center, oversees the installation and placement of Annie, a 2000-year-old mummy which is on loan to the Franklin Institute for the Lost Egypt exhibit, Tuesday, January 26, 2016.

Annie, a nickname given to the anonymous 16- to 18-year-old who lived more than 2,000 years ago, would have been a typical teenager for her time. She wasn't a pharaoh or priest or someone who would normally be mummified, but she now has a place in history.

Based on CT scans of the mummy, it is assumed that Annie somehow fell into the Nile and drowned. She was probably given special treatment, despite being anonymous, because the river was sacred to the Egyptians.

Using other modern-day technology, forensic sculptors were also able to recreate what her face would have looked like just from the bones. The process begins with a 3-D X-ray image of the mummy, then a plastic mold is made of the skull using a 3-D printer, and, finally, an artist adds in individual features.

"Thanks to modern technology, being able to bring a human element to someone from thousands of years ago is becoming more prevalent," Leveque stated when asked if mummy CT scans were a common practice.

Annie's identity and backstory are only one section of the exhibit, however. In total, there are four areas to explore. 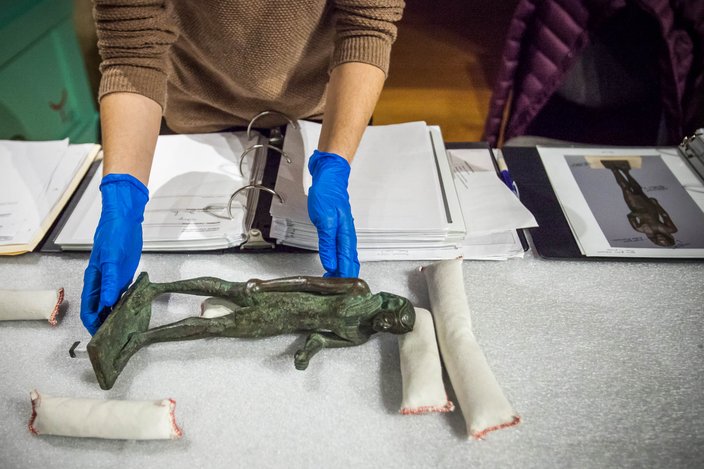 Dawn Kriss, a conservator for the Brooklyn Museum traveled with over 50 artifacts that are on loan to the Franklin Institute to meticulously inspect and log the condition of each piece and before its installation in the Lost Egypt exhibit, Tuesday, January 26, 2016.

Area one is the orientation entrance where guests are introduced to key archaeological sites in Egypt across a giant floor map. A computer game challenges visitors to pack the right supplies to travel by camel to a dig site.

Once guests are through the opening space, they will have a chance to play with tools, techniques and technology in a field site modeled after the Lost City of the Pyramid Builders site on the Giza Plateau. Through various hands-on activities, visitors can make their own speculations on how the pyramids were built and compare them to those of the experts.

Next up in the exhibition is the third themed area, where Annie's display is located. Take an in-depth look at Egyptian culture by learning about the afterlife in ancient Egypt, hieroglyphics and the religious significance in burial rituals. There are also 67 real Egyptian artifacts to view. 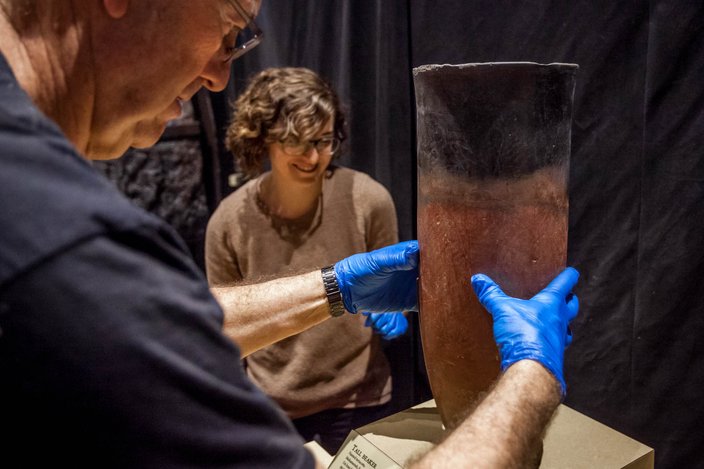 Terry White, Traveling Exhibit Supervisor for the Center of Science and Industry and Dawn Kriss, a conservator for the Brooklyn Museum install a tall beaker in the Lost Egypt exhibit at the Franklin Institute, Tuesday, January 26, 2016.

Once guests have a comprehensive understanding of the history of the ancient Egyptians, they can move on to the final area in the exhibit. There, visitors will explore how modern science and technology help us understand the past.

The exhibit will open the last weekend of January and will be on display until the end of August.