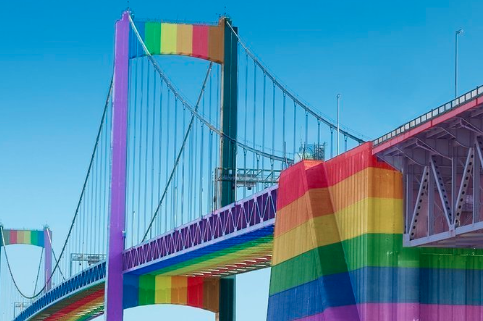 A petition circulating on social media to paint the Walt Whitman Bridge in rainbow colors already has more than 450 signatures.

A petition is collecting signatures to adorn the Walt Whitman Bridge in rainbow colors more than 60 years after the bridge was officially and controversially named for the local poet and writer.

The suspension bridge, owned and operated by the Delaware River Port Authority, crosses the Delaware and connects Philadelphia to Gloucester City, New Jersey, making it what the newly-created petitions calls "arguably the largest monument to a queer American anywhere in the United States today."

Whitman is regarded as one of America's most significant 19th century poets — and according to the Poetry Foundation, he strongly influenced other artists like Ezra Pound, Allen Ginsberg, and C.K. Williams.

Now, 200 years after his birth, the Penn Libraries Kislak Center and the Streets Dept art and culture blog, run by writer and curator Conrad Benner, have joined together in an effort to have the bridge painted with the pride flag colors to remind younger generations of his work and celebrate his contribution to LGBTQ culture.

"While we’ll never know how Whitman may have identified himself in today’s parlance, what we do know is what he wrote about, and that includes his queer attractions and relationships," the petition reads. "By painting the Walt Whitman Bridge rainbow we would be ... celebrating and inspiring current and future generations of queer Americans by creating one of the country’s largest physical symbols of LGBTQ pride."

Whitman was well-regarded as a celebrant of democracy, friendship, and nature — but nevertheless, many staunchly opposed the bridge's naming decision at the time.

Help us promote the egalitarian society that Whitman described in his work by signing this petition to repaint the Walt Whitman Bridge in Philly Pride colors! We're almost at 500 signatures...#whitat200 https://t.co/JcGT4zChbn pic.twitter.com/tcS2MjAXcf

In fact, "Leaves" was considered one of his most controversial works because of its description of sex, and many deemed it inappropriately "homoerotic."

More than 60 years ago, when the proposal to name the bridge for Whitman was announced, the DRPA began to receive condemning letters from local clergy, claiming "Whitman did not have the 'noble stature' required for such an honor, and 'his life and works are personally objectionable to us.'" Historians now believe Whitman lived with three men in romantic relationships during his lifetime.

But the rebuttals were apparently too late and in May 1957, the Walt Whitman Bridge officially opened.

By 12:30 p.m. Wednesday, the change.org petition to repaint the bridge had already surpassed its original goal of 500 signatures and organizers extended the goal to 1,000.