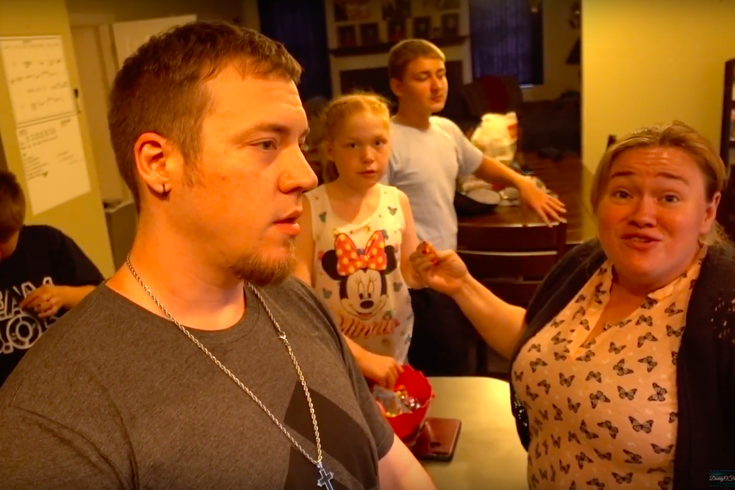 My co-workers apparently like getting me riled up, which is precisely how a YouTube video titled “INVISIBLE INK PRANK! (EPIC FREAKOUT)” made its way into my possession around 7 p.m. on Easter Sunday.

It’s the work of Mike “DaddyOFive” Martin who, along with his Damascus, Maryland family, has a penchant for posting “prank” videos along numerous social media sites. (See here, here and here).

You can watch the six-and-a-half minute video below, but be forewarned, despite the appearance of young children therein, it’s a NSFW endeavor.

The scene starts with MommyOFive showing off some invisible ink that she intends to “squirt all over (the) carpet and start flipping out” to really get young Cody’s goose.

The inspiration, she reminds folks who’ve “seen our videos,” is that the youngster once got ink all over the carpet. Since they had to pay someone to come clean the ink up, this prank seems like a fun little bit of revenge to her.

The camera then pans to a scene that can best be described as “Uno cards strewn about a bloody crime scene,” because nothing is better for parents to do than put the fear of Christ into their youngsters, issherite?!?

“What the f***…” she continues before DaddyOFive finishes the sentence with “did you do?”

“WHAT THE F***??????” continue her horrible shrieks, reminiscent of a scene that draws child-protective services in many instances.

From there, we have a young child cornered by screaming, angry parents. You can practically see his heart pounding through his chest. He swears to God he didn’t spill the ink. He’s fighting back tears until they start flowing as mommy and daddy start talking about how he “f***ing did this before.”

The screaming, cursing, threats of punishment and tormenting don’t stop for a good four minutes. That’s when that horrible, horrible mother tells the kids that SURPRISE, IT’S JUST INVISIBLE INK! HARDY HAR HAR. WE GOT YOU GOOD, OFFSPRING!

“They did!” responds MommyOFive, offering a celebratory jig.

These parents – bolstering a prank video brand that includes their kids as characters – keep maniacally laughing as the victims try to come to grips with what just happened.

It closes with young Cody having to “thank (viewers) for watching this video” and inviting people to follow them on social media and comment on it.

Comment, people did. While some defended the “artists” behind the video, many folks felt the same way I did. Specifically, that it was just a flat-out horrendous thing to do to children. And that the parents should be ashamed of themselves.

Long ago, I decided that it’s folly to judge how other people raise their children. Each family is different. There are few blanket rules. However – and fully admitting that my son has unfortunately profited by 25 cents each time he hears his daddy use a “bad word” – among the blanket rules that do apply is this: Don’t torment your children.

That’s what’s so patently offensive about this April 12 “prank” video that not only warranted a “This video is for entertainment purposes only no child was harmed in the making of this video” disclaimer, but an April 16 “BLOCKING ALL THE HATERS!” response video.

Because, yeah, sure, people who were offended by your horrendous treatment of children are the ones in the wrong. Not mommy and daddy, who think it’s totally normal to build an “online brand” by making your children fear for their lives.

In any event, the goateed daddy starts with the “don’t normally do this” disclaimer but “all sorts of hate on my social media” changed the rules of engagement.

He’s supported by kid and wife relying on the “just a prank, bro” defense against people who just “don’t see the humor in it.” Soon, Cody admits he doesn’t even know what “traumatized” means, but he wasn’t. Mommy then has the kids admit that they prank their parents, too!

“People were saying a lot of mean things about us because we’re such terrible parents because we pranked ya,” mommy then says.

“You cry when you get pranked,” the daughter then says. “So what? It’s not child abuse.”

Their defensiveness is as difficult to watch as the original video, particularly when they rely on the “if they don’t like our channel, why do they watch us and take the time to comment?”

It goes on along those lines for a while. You can watch the response to “haters who cause us problems and try to embarrass us and embarrass them and try to ruin our lives” below:

Here’s the thing: The people commenting on the video aren’t the ones in the wrong. The parents who think it’s OK to behave like this, they are wrong, particularly when children are used as shields.

It’s one thing when a prank is funny. It’s another thing when it isn’t and, in the process of not being funny, it makes kids uncomfortable if even for a couple minutes.

I don’t care if those kids – as mommy claims – hear worse words in music.

I don’t care if they run to the defense of their family’s online-branding efforts, either.

What I care about is this: The haters didn’t embarrass those children, their parents did. To claim otherwise is deflecting blame.

The world is tough enough as it is these days. The last thing kids need is to be used as blooper-reel props by the people whose main job on earth is to raise and protect them.

Shame on them both. And if you see this, Daddy and MommyOFive, please block me on all social media (my name is my handle).

My world was a better place before I saw your invisible ink prank, and yours will too if you take a moment of self-reflection to realize that making your kids cry for laughing strangers is horrendously callow.