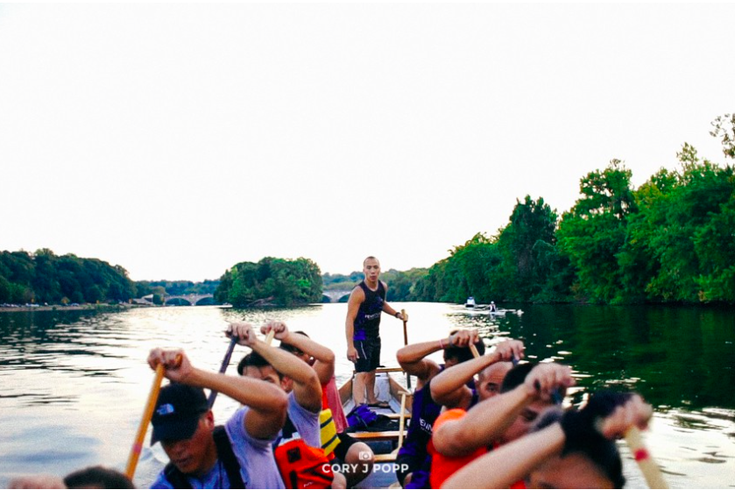 The Penn Dragon Boat Club practices in preparation for the International Dragon Boat Festival on November 7, 2015.

Anyone who attended a college situated near rivers or lakes knows that the members of a university crew team embody a rare, borderline masochistic dedication to their physically taxing sport.

The Penn Dragon Boat Club is a prime example of this ethic: they operate under the John Mellencamp mantra "Make it hurt good," preparing year-round for local, regional and international competitions.

Philadelphia videographer Cory J. Popp was invited to join Dragon Boat Club for a mid-September practice ahead of the International Dragon Boat Festival on November 7. While shooting his latest video, Popp described what he saw as "intense" and "absolutely epic."

One of the world's fastest growing sports, dragon boat racing originated from traditional Chinese-designed boats propelled with paddles by a large crew. The sport relies more on synchronicity than strength, with up to 20 paddlers led by a drummer at the bow to assist with timing and a steerperson at the back who serves as the team captain.

The Penn Dragon Boat Club was formed in 2011 by several alumni from the University of Pennsylvania, who in their first year of competition placed second at the International Dragon Boat Festival. Many faces have changed, but they have since placed highly in several other regional races and continue to adhere to their rigorous practice regimen (for which they reward themselves with group noodle soup sessions).

When the festival kicks off next month, teams representing local universities, communities and businesses will be prepared to enter the Schuylkill River bright and early for a prompt start at 8 a.m. Sheerly for the incredible display of grit, a great way to start your day would be to witness these teams brave the elements and compete for glory.