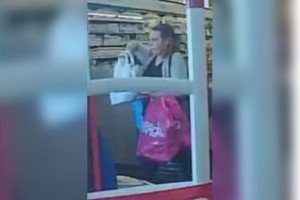 The Philadelphia Police are seeking help to identify and locate this woman. Police believe she robbed an attendee of an event at the Convention Center on April 16, and used the victim's credit card at area stores.

According to police, the 23-year-old female was at the convention center, 1101 Arch St., when her purse was stolen at about 1:30 p.m. April 16. The suspect is described as a white female, about 30 years old, with a medium build, brown hair and wearing a gray sweater, black shirt and white sneakers.

The victim was carrying her identification, credit and debit cards, keys and $80 in cash in the purse, police said.

A few hours later, cops said the victim's credit card was used at several stores, including the Walgreens at 2310 W. Oregon Ave.

Watch surveillance video from the Walgreens store, which police said shows the suspect carrying a variety of shopping bags while using the victim's card:

Anyone who sees this woman, should not approach her, police said. Instead call 911 immediately.