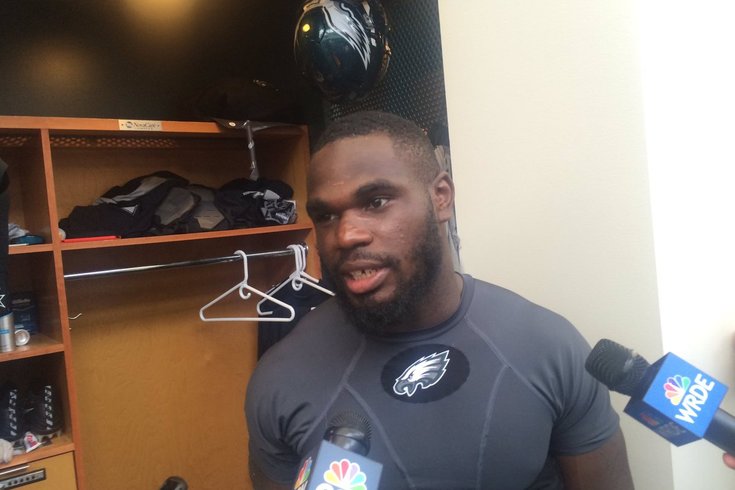 Wendell Smallwood has been running physical at Eagles camp.

After the Eagles’ practice on Thursday, the locker room at the NovaCare Complex was more lethargic than usual. It had been a hot South Philadelphia morning, and for the second time in three days, the Eagles worked out in full pads. That means “live” periods with full tackling.

The practice was physical. And the Eagles players were, understandably, tired.

“It feels like football,” Wendell Smallwood said with a gap-toothed grin.

The second-year running back was gassed just like everyone else, but during both live periods this week, he has clearly been one of the Eagles’ standouts. With LeGarrette Blount (personal reasons) and Donnel Pumphrey (hamstring injury) both unavailable to practice, Smallwood and UDFA/local kid Corey Clement received most of the workload. Darren Sproles also had a few touches mixed in, but by this point, the Eagles know what he can do. Best to keep a veteran like him fresh.

Smallwood has seized the opportunity, and in particular, impressed with his physicality. Nobody is going to confuse him for the type of “bowling ball” back that Blount has been during his career, but the West Virginia product has run consistently run hard.

Offensive coordinator Frank Reich used the words “thrashing” and “fearless” to describe Smallwood’s running style. Even when he has been brought down, the defender usually pays a price.

“I’m not shying away from [contact] and that’s what Duce [Staley] wants to see out of me,” Smallwood said. “He wants to see me be a physical runner and be able to lower that shoulder and show I have that power. I think I’ve got it when I’m rolling, I just got to keep showing that and keep embracing it.”

Of all the Eagles entering training camp, Smallwood might have the widest range of outcomes when it comes to a regular-season role. On one end of the spectrum, you could argue that he’s simply battling with Clement for fourth running back spot. But because the other Birds backs bring specific skill sets to the table — Blount has excelled in short yardage, Sproles is the matchup nightmare, Pumphrey might be utilized primarily in the slot — you could argue that Smallwood is vying for a decent amount of regular ol’ carries.

The Wilmington, Del. native had an up-and-down 13-game rookie season, with 312 rushing yards on 77 attempts and 55 receiving yards on six catches. His best game came in Week 3 against Pittsburgh (79 rushing yards and a touchdown), but he also coughed up a crucial fumble during the fourth-quarter meltdown on that Sunday night in Dallas.

NOPE.
You're not stopping Wendell Smallwood.

In reality, Smallwood acquitted himself well enough for a fifth-round rookie. But as he wants to become a more integral part of the Eagles offense, Smallwood says he’s using a slow individual finish to the 2016 season as motivation.

“I was disappointed in myself in things I was missing,” Smallwood said. “I think I did OK, but some things I was good at, I could have been great at.”

Perhaps more than any other position, the running backs benefit from the hitting at practices being turned up. After all, you can’t make anyone miss when there’s no tackling.

“It gives us a chance on offense to see our backs,” Reich said. “Who can make guys miss? Who can keep their balance? Who can turn those negative plays into positive plays? Who can get those extra yards up inside, get a push?”

Smallwood agreed with his coach’s assessment, and while he flew under the radar a bit this offseason as Carson Wentz’s weapons were upgraded elsewhere, the second-year back is making his case for increased playing time with a more physical running style.

“I definitely think ‘live’ is the running back’s game,” he said. “We finally get to get out there and showcase what we can do. Some of the guys [on defense] when we’re not going live, they’ll run up and think ‘play over.’ We can bounce off them, we can make you miss.

“That’s always been my favorite since I was little. I mean, that’s the real thing anyway.”