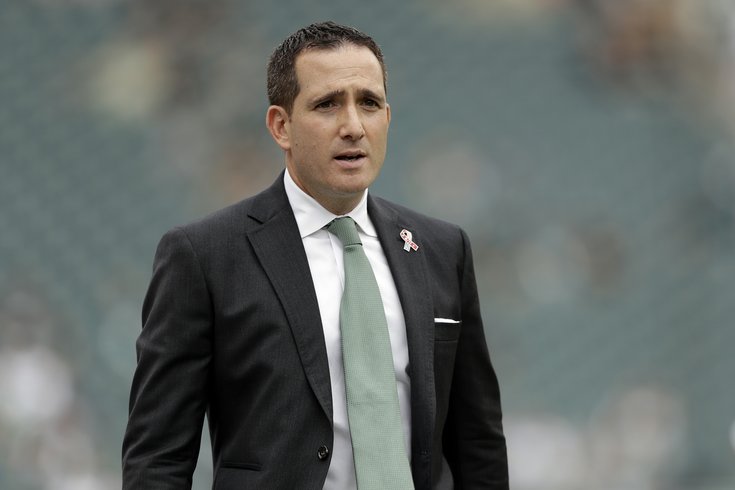 One week from now, we'll know a little bit more about how well Howie Roseman, Joe Douglas and Doug Pederson did with their 53-man roster, which was submitted to the league on Saturday and further solidified on Sunday when they failed to claim any players off waivers, something they've done quite a bit of in past years.

There were some surprises, sure. But there weren't any crazy, head-scratching moves from the Eagles, who were among the busier teams throughout the summer in terms roster turnover.

Now, they have one week to prepare for their season opener against Washington. And it's not easy opening on the road against a division rival, but preparing his team for that game, while important, wasn't Roseman's sole motivation for construction the roster in the way he did.

And that's where we begin today's roster-specific version of What They're Saying:

The Eagles roster is better than it's been in the past – that's not to say there aren't still holes at certain positions – and that's allowed Roseman and the rest of the Eagles' brain trust to be more flexible in terms of which players they keep and which ones they let go. It's had an impact on a position-by-position basis – see: keeping five running backs but just eight offensive lineman – but it's also given the Birds the opportunity to hang on to some guys they feel could play a significant role in the future, even if they aren't quite ready yet.

“We’re not trying to sacrifice the roster as it goes into Washington (for opening day)," Roseman said Saturday. "We’re trying to compete and win as many games as we possibly can.

"But we also don’t want to be short-sighted about losing guys that we think down the (line) could become starters. Guys who look like they have traits to become a starter and have a high ceiling, we’re going to try to invest in those guys and be more patient with them."

This is a departure for the Eagles and Roseman, who in past years has simply kept the players he feels are most ready to play now.  [csnphilly.com]

Building from the bottom

So how did that philosophy impact this current round of cuts? Roseman explains...

“I think it’s important for us, when we make these decisions, we’re talking about the 46, the 53 and then the 63,” said top executive Howie Roseman, referring to the 46-man active game day roster and the 63-man roster that includes the practice squad. “We want to make sure our coaches have the best 46 guys that they need to go into Washington. And then from there, there are also guys that we want to develop. [There are guys] that we want to sit there a year from now and hope that they have taken another step.”

That would describe how the Eagles thought about Clement, Pumphrey, and Gibson. Pumphrey and Gibson are both draft picks, and the Eagles didn’t think one summer was enough to give up on either even though neither stood out in the preseason…

There were no egregious omissions among the cuts, and the Eagles added four players after the  cut-down to 53 men last year. So those bottom-of-the-roster players shouldn’t feel safe. But Roseman said the Eagles have a better 53-man roster than they had last year, so that might affect how they use the 12th waiver claim.  [philly.com]

As we now know, the Eagles weren’t awarded any players off the waiver wire.

So what do Eagles have in their 2017 draft class?

Much of that long-term building will come through the draft, and at least at the outset – remember, they haven't played a game yet – the 2017 class is looking like a mixed bag.

Derek Barnett looks like a stud and he’s only 21. Mack Hollins showed he can play and be a special teams contirbutor. Elijah Qualls earned his spot on the roster.

As for everyone else, we’ll see. Gibson doesn’t contribute on special teams so he’ll likely be inactive on game day. Pumphrey will be inactive. Gerry isn’t on the team. Rasul Douglas is probably best suited as a backup/role-player for now.

Sidney Jones is really the make-or-break factor for this draft class. We’ll get a better idea of his ability to contribute when he’s fully healthy next year.  [bleedinggreennation.com]

Recent (better) draftees getting a chance to develop

Only three of their draft picks from the last two season failed to make the initial 53-man roster, and one could be coming back as a practice squad guy.

Six of the eight players from the 2016 draft made the roster, including quarterback Carson Wentz, offensive linemen Isaac Seumalo and Halapoulivaati Vaiti, running back Wendell Smallwood, cornerback Jalen Mills, and linebacker Joe Walker. The Eagles parted ways with seventh-round Alex McCalister on Saturday, reaching an injury settlement with him. Also gone is Blake Countess.

Among this year’s draft class, only one got the axe on Saturday — linebacker Nathan Gerry, who will likely be brought to the practice squad.

Already, these two classes are shaping up to be far better than the disasters of 2014, in which only fourth-rounder Jaylen Watkins and seventh-rounder Beau Allen remain. And Watkins was released once before being brought back.  [buckscountycouriertimes.com]

In addition to suggesting the Eagles will draft a tight end next year, Eliot also explained why rookie Shelton Gibson made the team, which makes even more sense given the context of Roseman's above comments.

One of the biggest surprises to many was the team's decision to keep rookie receiver Shelton Gibson on the roster. The decision, however, shouldn't be that shocking.

The Eagles used a fifth-round pick on Gibson in the 2017 NFL Draft, and giving up on him after just one offseason would have been foolish. Yes, Gibson struggled with drops at times, but he still has elite speed for his position and was one of the best deep threats in college football last season.

Had the Eagles released Gibson he likely wouldn't have made it through waivers, meaning saying goodbye to Gibson on Saturday might have been the last time the team got a chance to have him on the roster.  [nj.com]

Light on the offensive line?

As previously mentioned, one of the effects of keeping so many runnings backs and wide receivers is that they had to carry fewer players at other positions.

The biggest impact in that regard could come along the offensive line, where they kept just eight players, including a few that only play one position. But according to Roseman, there's a reason he felt safe doing that.

The Eagles have kept only eight offensive linemen before. Trading away Allen Barbre and Matt Tobin over the last month suggested great depth. Roseman said that he may bring back some of the younger prospects – Dillon Gordon, Darrell Greene, Aaron Neary – to the practice squad. For now, there are only three reserves – center/guard Wisnewiski, tackle Vaitai, and guard Warmack – although Roseman considered them more than backups. “We think we have eight starters on the offensive line,” he said.  [philly.com]

So why give up on Gerry?

If the Eagles want to give their draft picks a chance to develop, why give up so quickly on Nate Gerry, who converted from safety to linebacker? For starters, there's a good chance Gerry clears waivers and will be signed to the practice squad. Remember, that's one of the main reasons they kept Shelton Gibson. And if it came down to those two, it would make sense to try to sneak Gerry, a guy in the middle of a position change, through waivers rather than a guy like Gibson.

Still, it was a tough call, according to Roseman.

While Philly could bring Gerry back on the practice squad if he clears waivers and wants to return, Roseman said the team didn't have space for him on the 53-man roster.

The Eagles wanted to keep six linebackers, and three starters already had spots locked up. Beyond that, Najee Goode and Kamu Grugier-Hill earned their places on the team through their special teams play, and 2016 seventh-round pick Joe Walker beat Gerry out  because of his success as a middle linebacker.

"That was a tough one," Roseman said of cutting Gerry. "That was one of the last ones we did right there. And we understand it was a transition for him, and it's going to take some time, but it was just the nature of the numbers game."  [pennlive.com]

Plenty of questions, including at QB

Despite all the moves and explanations we got for those moves, there are still questions. One of them is at quarterback – that's right, there's a quarterback controversy, just probably not in the way you'd think. The Eagles only kept two – Carson Wentz and Nick Foles – despite Foles not playing at all in the preseason.

They continue to insist that Foles is fine, but they'll likely sign another to the practice squad just in case.

The Eagles will likely sign a quarterback to the 10-man practice squad. It could be Dane Evans, who served as the fourth quarterback through the preseason, or someone released by another team.

"Certainly, if you're sitting here worrying about a quarterback, you wouldn't be able to keep [only] two," Roseman said. "We feel good about where Nick's at going into the Washington game [on Sept. 10]."  [delawareonline.com]