What they're saying: Is Wentz ready to be Eagles' starting QB? 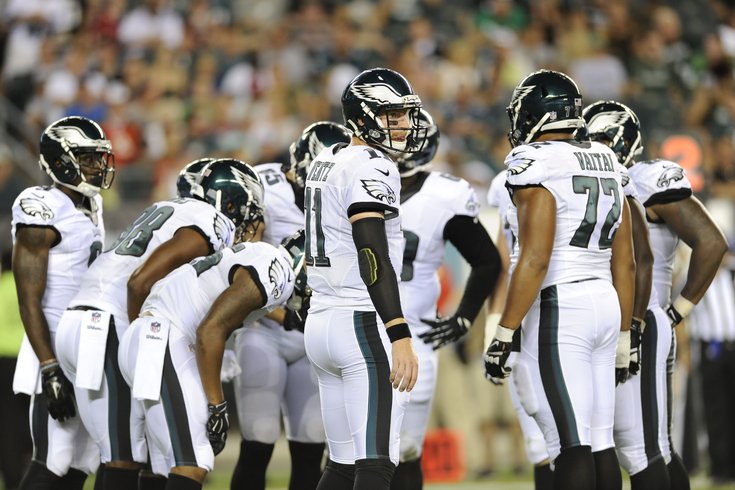 Carson Wentz looks to the sideline during the Philadelphia Eagles preseason game against the Tampa Bay Buccaneers.

When news of the Sam Bradford trade broke over the weekend, I was in Wooster, Ohio for a wedding – it was a blast, thanks for asking – and although I was off, I couldn't help but ask the guys watching football in the lobby, while their wives and girlfriends were busy getting ready, what they thought of the deal.

See, not only was the wedding in Ohio, but nearly everyone in attendance was a Browns fan. In addition to being the first team to face Carson Wentz's Eagles, the Browns were also the team that originally held the No. 2 pick in the draft before dealing it to the Eagles earlier this summer. And because of that trade, they also own the Eagles' first-round pick next year, meaning Browns fans are going to be paying attention to what the Eagles do all season, not just in Week 1.

To say the groom, Nate, and the other Cleveland fans were excited by all of this would be an understatement. Not because they thought it was a bad deal for the Birds -- they all seemed genuinely shocked by what Howie Roseman and the Eagles were able to command in return – but because it seemed like for the first time in forever, the Browns may have actually been handed a gift from above, deus ex machina style.

But even in the middle of being gifted some potentially good news, they would still impulsively say something like, "Hey, we're Browns fans so we'll take what we can get," or, "Our defense is so bad that it probably doesn't matter who is at quarterback. The Eagles can probably just run the ball 50 times and win."

But what about those who cover the league? What are they saying about Wentz's sudden rise to the top of the depth chart? Is he ready? Are the Eagles punting on the season? Did someone other than first-year head coach Doug Pederson make the decision to move Wentz ahead of backup Chase Daniel?

Here's a look at what they're saying...

•  Sticking with the Cleveland theme, the Browns apparently didn't think much of Wentz heading into the draft.  Paul DePodesta, the Browns chief strategy officer, said in a recent radio interview that the team didn't think Wentz would be a top 20 NFL quarterback, which lead to them trading the second-overall pick to the Eagles.

"We have to make judgments on the individual players and we're not always going to be right," DePodesta told Tony Grossi of WKNR-850 AM/ESPN Cleveland on July 30th.  "But in this particular case, we just didn't feel it was necessarily the right bet to make for us at this time. Again, it comes down to individual evaluation of a player. We will not always be right on those type of things.

"I think the hardest part, and where we have to stay the most disciplined, as much as you want a player, you can't invent him if he doesn't exist. In a given year, there may be two or three NFL-ready quarterbacks at the college level. In another year, there literally may be zero. There just may be not be anybody in that year who's good enough to be a top 20 quarterback in the NFL. ..."   [Cleveland.com]

•  And when he takes the field on Sunday against the Browns, Wentz will be doing something no other Eagles QB before him ever has – starting the opener as a rookie.

•  That lack of experience is naturally leading to even more skepticism about the Eagles' chances this season.

From FCS to NFL starter with only one preseason game under his belt. Here we go, Carson Wentz. Crazy.

So Carson Wentz started 23 games at 1-AA, played in one preseason game, and now is the #Eagles starting QB? Good luck, kid

Dak Prescott is in the ideal situation for a rookie QB. Carson Wentz is not.

•  Back home, there's more optimism. As NJ.com's Eliot Shorr-Parks wrote on Sunday, the decision to go with Wentz doesn't mean the Eagles are giving up on 2016. Bradford wasn’t that good to begin with, and most people were banking on a solid defense and weak NFC East being two of the main reasons the team had a chance to compete for a playoff spot. Why can’t they do the same with Wentz?

If we are betting on a quarterback to reach his ceiling, Wentz sure seems like the better bet, as he doesn't have a six-year track record of not doing so.

Like Bradford would have, Wentz will make mistakes this season.

Unlike Bradford, however, Wentz will bring more to the offense, both on the ground and in the air, and definitely when plays break down.

On a team where the quarterback needs to make the playmakers around him better, due to skill position players with plenty of question marks, Wentz sure seems like the better option to do just that.  [NJ.com]

•  As for the guy suddenly getting thrown into the fire, he says he's ready.

Carson Wentz was lying in the middle of a cornfield hunting geese when Doug Pederson called him Saturday to tell him he's the starter.

Well, maybe not at that exact moment. But Wentz says he's mentally prepared, according to the Inquirer's Berman.

“The whole time all along, I was just getting ready for whenever this time would come,” Wentz said. “I knew I was ready. I knew I was taking the mental reps, being out the last couple of weeks, even going out to the first preseason game. I was developing at a fast pace and now it’s here. I’m confident in myself, I’m confident in this team. I’m excited for it.”  [philly.com]

•  Wentz's teammates are also on board with having their rookie QB lead the offense this season.

Pederson: The locker room was excited and 100 pct. behind decision to start Carson Wentz.

• But all along the Eagles had maintained that Wentz was below Daniel on the depth chart. So why did that change when the Eagles dealt Bradford to the Vikings on Saturday? As Mark Eckel of NJ.com wrote on Monday, that decision could have been made above Pederson's head after Daniel did little to inspire confidence during the preseason.

Because there is nothing Wentz could have done, without taking a snap for a month, that propelled him past Daniel and all of a sudden made him ready to be a starting quarterback in the NFL.

One is this decision was not the head coach's and it sure didn't seem like it as he addressed the media after Monday's light practice. This came from either personnel boss Howie Roseman, who is running the entire show, or even higher up in owner Jeffrey Lurie.

And that decision could have come from the fact they watched Daniel play in the preseason and wondered themselves why they're paying this guy $7 million a year.  [NJ.com]

I have a different theory about this, one that I've mentioned before but will quickly outline again:

The Eagles never saw Daniel as a better quarterback than Wentz. In fact, talent has nothing to do with the decision to go with Daniel as the backup. Making Wentz inactive on game days would have prevented him from taking his first (real) NFL snaps in an emergency situation (like after an injury to Bradford), without having had the first-team reps during practice or the time to mentally prepare during the week leading up to that game.

Instead, Daniel would've been the one thrown into the game to finish what Bradford started. And if the injury was severe enough, forcing Bradford to miss extended time, that Monday, Carson Wentz would've been named the starter, given all the first-team reps in practice, and had time to prepare the way you'd like a rookie to prepare.

Essentially, that's what happened when the Eagles traded Bradford – the only difference is that instead of losing him to an injury for the season, they lost him via a trade. Either way, he's gone for the season. And with a week to prepare before facing the Browns in the opener, they opted to go with the rookie.

It may not have been their ideal scenario, but it was definitely one for which they had prepared. And given the opportunity that presented itself when Teddy Bridgewater went down with a freak knee injury last week, it was by far the best course of action.