Bradford deal means Eagles’ season is over before it even starts 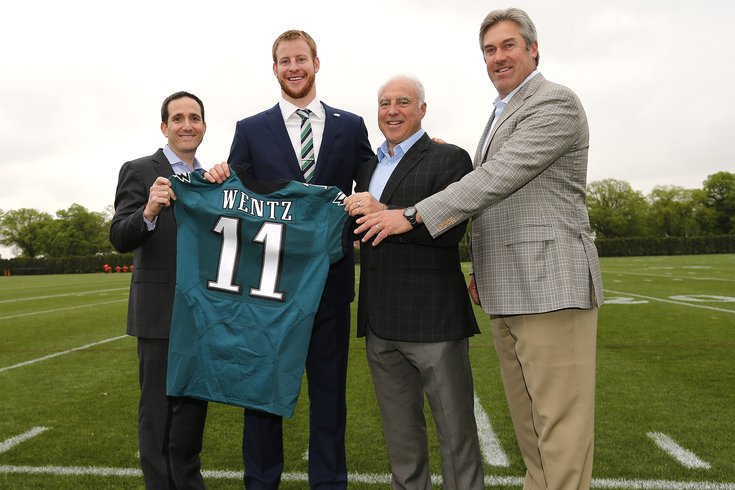 Now that Howie Roseman has absorbed 48 hours of national acclaim for his shocking trade of Sam Bradford to Minnesota, it’s time for a reality check. The Eagles GM made a mistake – probably a very big mistake – in dealing the least popular quarterback in recent history for a first-round draft pick in 2017.

That’s right. Roseman blew it this time. You read it here first.

Let’s start with the most obvious reason. Is the dislike for Bradford so intense that fans are willing to ignore Roseman’s remarks five months ago when he re-signed Bradford, boldly stating that the Eagles planned to compete for the NFC East title this season?

Since then, Dallas has lost its most important player, quarterback Tony Romo, for up to half the year, the Giants’ offense has been atrocious under their rookie head coach, and Daniel Snyder still owns the Redskins. Not only would the Eagles have competed for the division title this season, they probably would have won it.

Now, despite the euphoria over Carson Wentz’s sudden promotion to the starting job – made official by coach Doug Pederson at a news conference this morning – they will win nothing this year. Before the trade, I had the Birds with nine wins in 2016. Now I’ve got them with six – and that’s optimistic.

Wentz is everything this city loves in a quarterback. He’s strong, athletic, smart, bold and young. In the eyes of the fans, Bradford was none of those things. He was an overrated No. 1 draft pick who never reached his potential. He was, in every sense of the word, a bust.

I don’t agree. In my eyes, Bradford has always been better than fans here were willing to acknowledge, a victim of bad luck (two torn ACLs) and bad coaching (Jeff Fisher and Chip Kelly). His 32-for-40 passing this preseason was a testament to his best attribute – accuracy. He was perfect for the West-Coast offense.

Obviously, I’m not the only one who still believes in Bradford. The Vikings were willing to trade their top pick in 2017 and a fourth-rounder in 2018 for him. Somehow, they plan to make a run for the Super Bowl with a quarterback who is considered brittle, boring and ordinary. And those are the best things being said about him.

The joy in the streets of Philadelphia over Bradford’s departure (and Wentz’s ascension) is based on emotion, not logic. Wentz has a chance to be special, but not yet. The idea that he dazzled his bosses so much that they were willing to name him No. 1 right now is ridiculous. He didn’t even appear in the last three preseason games.

As for the “bounty” Roseman received in return, it might be a good idea to hold off on using that word just yet. A first-round pick in Roseman’s hands is not exactly a guaranteed future Pro Bowler. Need I mention Marcus Smith or Danny Watkins? They were both late first-round “bounties,” too.

The bottom line on the trade is that it proved Howie Roseman had no real commitment to competing for the division title this season, and has no real conviction about how to rebuild the Eagles.

Remember, right after studying the NFL from afar last year, the GM said the quarterback position defines success in the NFL. Then he traded his own starting quarterback eight days before the start of the season, a player he had already guaranteed $22 million. Does this sound like a GM with a rational plan to win a Super Bowl?

Not to me, it doesn’t. And that’s why, when the euphoria lifts over this deal, fans will realize the Eagles just forfeited a season for no good reason.

It’s hard to say who looks dumber right now, Colin Kaepernick for his decision to protest the national anthem, or the army of media idiots who are supporting this obnoxious ingrate.

Kaepernick’s argument that he cannot bring himself to honor a country that allows racially-motivated police brutality is offensive. America allows no such thing, as evidenced by the public backlash against these horrific incidents. Unfortunately, even a democracy like ours has racists and killers and other outliers.

To condemn our country over these transgressions is absurd, and especially so when you consider that Kaepernick signed a contract in 2014 worth $126 million, $61 million guaranteed. What other nation offers a washed-up quarterback with a bad attitude that kind of money? Wherever it is, Kaepernick needs to move there immediately.

Meanwhile, the media enablers have been slobbering all over themselves in their ardent defense of Kaepernick’s insulting gesture. He is merely exercising his right to free expression, they say. He is using his status as a high-profile athlete to highlight the horrors of racist police officers. Oh, please.

At the risk of appearing cynical, please consider a far more logical explanation. Kaepernick has been irrelevant for two seasons now, and is in danger of being cut soon. This preseason, he lost his starting job to the immortal Blaine Gabbert. At this point he’s battling with Vikings bust Christian Ponder for the backup job.

Colin Kaepernick is nothing more than an attention whore who saw one last opportunity for relevance. He has never taken a public stand for any social issues before this, and no one will care what he thinks when he is a former NFL player in the very near future.

Shame on him for dishonoring a country that has given him so much. And shame on the media lemmings who are supporting him for this.

If the original plan was to honor Ryan Howard in his last season as a Phillie, the organization has failed spectacularly. The big slugger entered his final month here bitter about his repeated benchings and confused about the sendoff he is receiving.

Is this really what GM Matt Klentak had in mind when he said, repeatedly all season, that there was no reason to release Howard?

There were many very good reasons to cut the likeable first baseman. First of all, manager Pete Mackanin needed to give Howard’s replacement, Tommy Joseph, as much experience as possible. Second, Howard is done – at least here – at the end of the season. And third, the veteran has been in serious decline for years.

But the biggest reason why Klentak’s do-nothing approach to Howard’s situation – and many other issues that have cropped up this year – was illogical is precisely what is happening right now, an awkward goodbye for a player who deserves better.

For the final time (I promise), please allow me to repeat what I have been writing here all season. It was simply not smart to keep Howard on the roster past May this season. He wasn’t hitting at all, he was blocking Joseph, and whether he accounted for an extra couple of wins off the bench meant nothing on a team going nowhere.

Still, the Phillies chose to act perplexed when cries erupted throughout the media all season for the team to cut ties with the last remaining hero from the 2008 champions. Somehow, the front-office sentimentalists thought this kind of a sendoff was better.

The benchings are absolutely right; Joseph needs to play. They are also fair; even after a solid August, Howard is hitting .196. But Howard has every right to feel upset about his final days as a Phillie. He earned a more respectful goodbye than this.

By trying to do the right thing, the Phillies did exactly the wrong thing. Matt Klentak needs to learn an important lesson from this sad situation. Sometimes, doing nothing is the worst option of all.

•  There is no better story in Philadelphia sports right now than the performance of Jon Dorenbos on America’s Got Talent. The Eagles long snapper made the finals last week with another unfathomable magic trick. Whether he grabs the grand prize of $1 million and a headline show in Vegas or not, Dorenbos is already our biggest winner of the summer.

•  Penn State just doesn’t get it. The delusional school announced last week its intention to honor Joe Paterno before the Lions’ game against Temple on Sept. 17. Get there early, sports fans. You wouldn’t want to miss the tribute to a coach who enabled the sexual assault of young people for over three decades.

•  Ruben Amaro Jr. was the worst GM in Philadelphia sports history. If you need any further proof, consider this: Three of the best pitchers in the American League this season are Cole Hamels (a Cy Young candidate with an ERA of 2.91), Carlos Carrasco (3.23) and J. A. Happ (3.32). Amaro traded all of them. Ugh.

•  Let me get this straight. The Eagles led the NFL in drops last season, and they just cut the most sure-handed wide receiver of the preseason, Paul Turner? Turner’s 17 catches led the league this summer, and he also ripped off a brilliant 71-yard punt return for a touchdown. And Bryce Treggs, Josh Huff and even Nelson Agholor rank higher? That’s nuts.

•  What is taking the NFL so long to determine the status of Eagles right tackle Lane Johnson, who is still awaiting the results of his appeal for taking a banned substance? Are we supposed to believe a billion-dollar industry like the NFL cannot get lab results in a month’s time? This delay is unfair to the Eagles, to Johnson and to the fans.

•  Jonathan Papelbon has decided not to attempt a comeback this season, after all. Sources say the ex-Phillies closer is hard at work trying to find his fastball, and his dignity.

READ ALL OF ANGELO'S COLUMNS HERE.