Where to watch the 2022 World Cup matches in Philly, the suburbs and South Jersey

There are plenty of soccer bars in the region showing the USMNT's matches, along with all the other tournament action 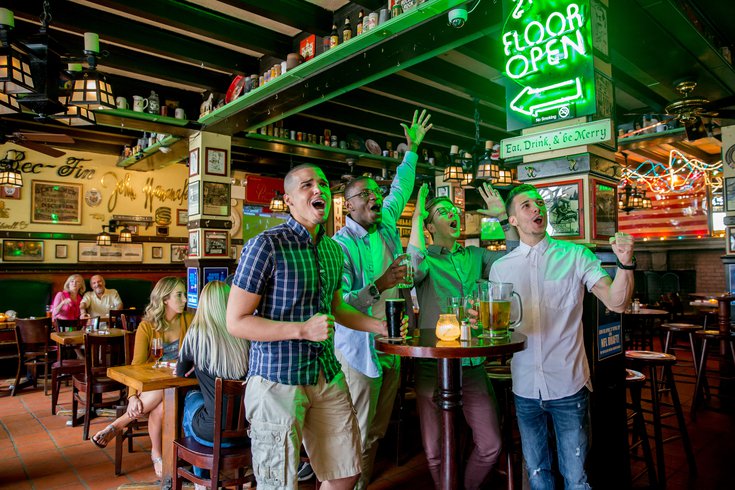 The 2022 FIFA World Cup in Qatar begin this Sunday, Nov. 20, and runs through December. Bars and restaurants throughout the Philadelphia region will be showing the soccer matches and hosting watch parties, including McGillin's Olde Ale House, above, which will have food and beer specials games.

The four-year wait is over for soccer fans, as the world's most prestigious soccer tournament and most popular sporting event, the FIFA World Cup, begins this weekend. Now all you have to do now is find a bar to watch the U.S. Men's National Team's matches with other supporters.

The are plenty of options for where to watch the USMNT, along any other game of the tournament taking place in Qatar. Several bars in the region are even opening as early as 8 a.m. to show matches. The games begin Sunday, Nov. 20, with the host county's team playing Ecuador at 11 a.m. and runs through the final scheduled for Dec. 18.

MORE: Skip the cooking and dine at these Philly restaurants this Thanksgiving

Here is a round-up of some of the bars in Philadelphia, the surrounding suburbs and South Jersey showing World Cup games – including those hosting watch parties when the U.S. plays. At the end of the list are the bars with multiple locations in both Pennsylvania and New Jersey. So no matter where you are, there's somewhere nearby to get out and watch soccer.

To keep track of all the action and plan out game day trips, fans can check out this handy World Cup schedule.

Know of any soccer bars in the Philly region that we've missed? Let us know, and we'll add them to the mix!

The Black Taxi | 745-747 N. 25th St.
An authentic Irish pub in Fairmount, The Black Taxi is known for streaming English Premier League soccer and offering a variety of drink specials on game days. It offers happy hour after 4 p.m. and Heineken deals during all soccer matches.

Brauhaus Schmitz | 718 South St.
The German beer hall will be a World Cup headquarters, open for all World Cup matches that begin at 8 a.m. or later, with $5 beer specials and a special menu throughout the tournament. On Friday, Nov. 25, when the USMNT plays England, the bar will shut down the 700 block of South Street from 12 p.m. to 5 p.m. for a watch party. The event is free to attend. There will be food truck fare, canned beer and VIP tickets available for purchase. Brauhaus Schmitz also plans to have a watch party for the Dec. 18 final.

Cavanaugh's Headhouse | 421 S Second St.
Soccer fans, particularly expats from Britain, Ireland and Scotland, have been watching matches at this Society Hill spot since back when it was The Dark Horse ... and before that when it was the Dickens Inn. This Cavanaugh's location has seven rooms, award-winning wings, lots of beers and huge flatscreens. Cavs, known for streaming Champions League Futbol, expects to have a crowd for many World Cup games. The bar is offering daily specials, as well as $5 Carlsberg pilsners.

Cavanaughs Rittenhouse | 1921 Sansom St.
The Irish pub's Rittenhouse location will be open for fans to watch all World Cup matches that begin after 11:30 a.m. on its 20 HDTVs. The bar will open earlier for U.S. matches that start before that. They will have $5 Warsteiner pilsners during the games.

Fado Irish Pub | 1500 Locust St.
The Irish sports bar, will act as a 2022 World Cup Headquarters, complete with a match-day brunch menu and drink specials. Compete in Fado's Fantasy Challenge; one lucky patron will win $500. No reservations will be accepted for tournament matches, as seating is first come, first serve. Doors will open 30 minutes before all 8 a.m. games. Fans can find out which matches the bar is showing online.

Figo | 1033 N. Second St.
Figo, an Italian restaurant and bar in Northern Liberties, will show all matches throughout the tournament, as well as offering $25 Peroni beer buckets during each.

Frankford Hall | 1210 Frankford Ave.
Frankford Hall, a German biergarten in Fishtown, will be showing the World Cup matches. On Saturday, Nov. 26, in alignment with the playoffs, the Fishtown Association is hosting a street soccer tournament on Frankford Avenue, and Frankford Hall will be playing a big part in it by sponsoring the local Kensington Soccer Club team and offering outdoor food and drink specials.

McGillin's Olde Ale House | 1310 Drury St.
McGillin's, the oldest continuously operating tavern in Philadelphia, will have food and beer specials during the FIFA World Cup games. McGillin's has hosted World Cup watch parties in the past, and it also is the birthplace of the Sons of Ben. In 2007, McGillin's by Bryan James, Andrew Dillon and David Flagler founded the Philadelphia Union's first supporter group at McGillin's.

Misconduct Tavern Logan Square 1511 Locust | 1801 John F Kennedy Blvd. | 3131 Walnut St.
For a number of years now, Misconduct Tavern's bar on Locust Street in Rittenhouse has been the place where Arsenal fans gather to watch the club's Premier League matches. For the World Cup, club loyalties are set aside for national loyalties. All three locations will show matches, including hosting watch parties for the U.S. team's group stage matches. The bar will show soccer on big screens while serving up their signature burgers and beers.

Rivers Casino Philadelphia |1001 N. Delaware Ave.
The BetRivers Sportsbook at Rivers Casino will have a massive 600-square-foot video wall showing all 64 World Cup games. There is also seating, a dedicated bar and menu from Jack's Bar + Grill during restaurant hours. For those looking to bet on games, the sportsbook features 33 kiosks open 24/7 throughout the casino, and writer windows are open during select times.

The 700 | 700 N. Second St.
The multilevel sports bar in Northern Liberties is a regular spot for soccer fanatics. Throughout the tournament, The 700 will show matches daily, as well as offer themed drink specials for fans.

Tir na nÓg Irish Pub | 1600 Arch St.
The bar offers draft beers as well as Irish and American fare during happy hours and soccer matches. Tir na nÓg has hosted contests throughout the 2022 English Premier League's season, and featured a variety of specials during the last World Cup. This year, doors to the pub will open early for 8 a.m. matches and a fantasy contest will be held.

Xfinity Live! | 1100 Pattison Ave.
The complex in the Stadium District is partnering with the Philadelphia Union to host World Cup watch parties for each of the USMNT's group stage matches: Monday, Nov. 21, at 2 p.m.; Friday, Nov. 25 at 2 p.m. and Tuesday, Nov. 29 at 2 p.m. There will be beer specials – $3 Budweisers and Bud Lights and $5 Stellas. There also will be giveaways ranging from merchandise to Flyers tickets to 2026 World Cup tickets. Reserve a dedicated area to watch the matches by contacting Paula DiMauro at paula@xfinitylive.com.

Other bars in region to watch World Cup

Theses bars and restaurants are all familiar names with lots of locations both in Pennsylvania and New Jersey.

Chickie's & Pete's | Multiple locations in Pa. and N.J.
There are many Chickie's & Pete's restaurants around the region. Enjoy crab fries and drinks while catching World Cup matches on the sports bar's many big screens. If games fall within happy hour, from 4:30 p.m. to 7 p.m., Chickie's and Pete's will offer its discounted food and drink specials menu.

P.J. Whelihan's | Multiple locations in Pa. and N.J.
The sports bar has 20 locations throughout Pennsylvania and South Jersey, and each restaurant has a neighborhood feel and a TV package that helps make PJ's the ideal place to catch all the sports action, plus a huge selection of beer on tap and famous wings to enjoy during the games.