Doctors, nurses show solidarity with protesters calling for an end to systemic justice and police brutality 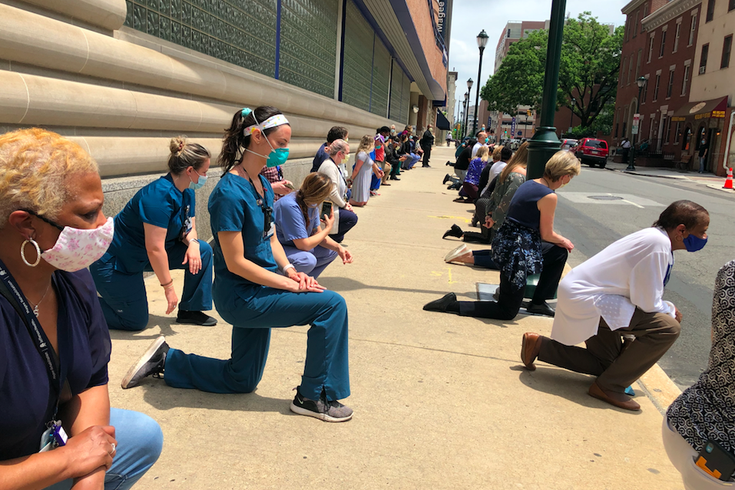 Health care workers and staffers at Magee Rehabilitation Hospital in Philadelphia kneel in remembrance of George Floyd, a black man who died after a Minneapolis police officer knelt on his neck for nearly nine minutes.

The "White Coats for Black Lives" protest played out at locations across the Philadelphia region, with doctors, nurses and other providers demanding justice for George Floyd, a black man killed by Minneapolis police.

Health care providers temporarily left their positions to at 1 p.m. to kneel for 8 minutes and 46 seconds, the amount of time that former Minneapolis police officer Derek Chauvin spent kneeling on Floyd's neck. The symbolic gesture is one that has been adopted by protesters across the United States.

Chauvin has been charged with second-degree murder; three other officers also face charges.

Temple University Hospital, Jefferson Health and Magee Rehabilitation providers stepped outside their respective facilities to participate. And many providers in South Jersey joined in too.

"As physicians, it is our duty to ensure the health of our patients," Skrzynski said. "We have to stand up against anything that threatens their wellbeing. The health disparities that emerge as a result of systemic racism and discrimination are no exception."

Here are a collection of tweets from the demonstrations.

Kneeling for 8:46 with an incredible number of friends and colleagues from @ChildrensPhila and @PennMedicine

Doctors, nurses and other healthcare workers here at Temple Hospital and across the Philadelphia just kneeled for 8:46 in “recognition of racism as a public health crisis and commitment to racial justice.” #whitecoatsforblacklivesphilly pic.twitter.com/DGGp1JBDNi

white coats for black lives at @JeffersonUniv. so proud to be part of a community where faculty, students, and staff come out for what's right. joined by @FouquerelL and @215RyanBrooks among many others! pic.twitter.com/IAw6RDnQX5