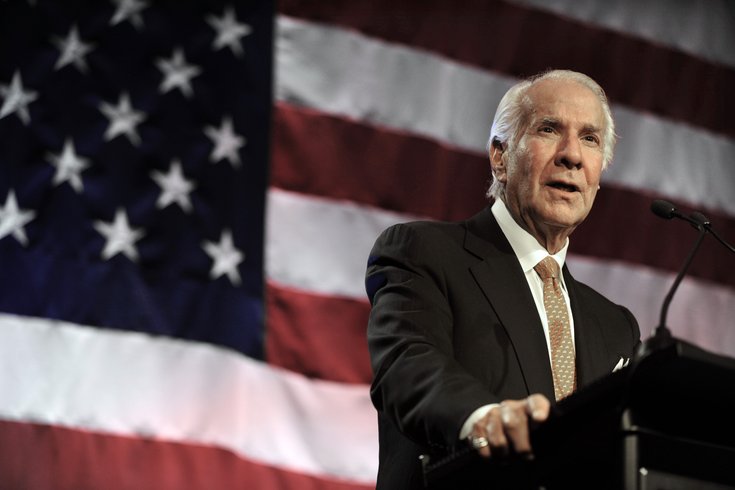 Ed Snider speaks after being inducted into the U.S. Hockey Hall of Fame during a ceremony and dinner in Chicago, Monday, Dec. 12, 2011.

The Philadelphia Flyers went into their holiday break on Monday night with a rousing 4-3 victory over the St. Louis Blues on their home ice. It was one of the best nights of the season for the fans who howled through a boisterous game with physical play and another comeback win.

It was a nice way to go into the Christmas break and, as usual, the holidays provide sports fans a chance to call a time out, sit back and reflect on their respective teams’ trials and tribulations.

It is also an opportune time to send some special holiday wishes to people who have made impacts on the Philadelphia sports scene, and it seems appropriate to send out such a greeting to Ed Snider, the Flyers founder, owner and now chairman of the board. Snider, who has been battling health issues, has not been around nearly as much as in the past, but he remains the organization’s driving force.

Snider is as anxious as any fan to see the development of Shayne Gostisbehere, who is already making an impact, as well as defensive prospects Ivan Provorov, Travis Sanheim and forwards like Travis Konecny.

The hopes are that these will be the names that replace the Clarkes and Barbers and Tocchets and Kerrs, and so many others that have worn the orange and black. Recently when Rod Brind’Amour was honored at a game, he went out of his way to mention that if a hockey player did not want to play in Philadelphia for the Flyers, there is simply something wrong with that player.

That is the legacy Snider has brought to the franchise. It has been a long and storied journey for the man who has been the Flyers archangel since he brought the team into the league in 1967, and throughout his entire tenure the goal has been very simple – do everything and anything it takes to win. And through the years, it has been Snider who has made the Flyers into an iconic sports franchise.

Snider is a carryover from the days when you actually needed to be a sportsman to own a club; when you NEEDED to win to bring people into the building and pay the bills. That concept is a far cry from today’s business plan in which you simply buy a team, take the TV money and watch as the team’s value rises – no matter if you win a single game or sell even a single ticket.

It’s been none of that for the Flyers.

There are a number of critics who will smirk at such a mission statement. After all, the Flyers have not won the Stanley Cup since 1975, and the roll call of people who were around to witness those long gone glory days diminishes by the year.

Take a look at the franchises that entered the NHL with the Flyers in the huge expansion of 1967: The Oakland Seals folded, the Minnesota North Stars moved to Dallas, the St. Louis Blues have still not won a Cup and at one time had such an ownership mess they actually went to an NHL draft with nobody at their draft table.

The Los Angeles Kings have finally gained some status in Los Angeles, but they are hardly part of LA culture; the Pittsburgh Penguins, blessed with three of the greatest players to ever play the game in Mario Lemieux, Jaromir Jagr and now Sidney Crosby once threatened to move to Kansas City and dealt with bankruptcy to the point where Lemieux had to take ownership.

It has been the Flyers who have been the rock that made the NHL realize it could expand its footprint in the United States. It was the Flyers who first went shoulder to shoulder with the Original Six.

Living in the past?

How about recognizing the past just like all iconic organizations. It’s not unlike what the Montreal Canadiens do with the torch in their locker room or what the Boston Bruins do with the Bobby Orr worship, the Maple Leafs with so many ghosts, the Yankees with their monuments, or shaking down of the thunder at Notre Dame.

And although Detroit has flown on the wings of players such as Steve Yzerman and Nick Lidstrom, there will always be the adulation of Gordie Howe and the Production Line.

Under Snider, the Flyers are THAT kind of franchise, as much a part of the city as the Eagles and the Phillies, who have been around so much longer. Since Snider put the team here in 1967, Philadelphia has become a hockey town, and that is no small accomplishment in a city where hockey rinks are still rare and there is a variety of sports and entertainment options.

It was that bold expansion for which Snider lobbied the NHL – the league was not even looking at Philadelphia -- that paved a road for players such as Mike Richter (Flourtown), Johnny Gaudreau (Salem, N.J.), Bobby Ryan (Cherry Hill) and even Gostistbehere, who grew up in Florida -- another of the NHL’s expansion sites.

Somebody had to be willing to risk those first steps that have truly led to the building of a powerful Div. 1 hockey program at Penn State where the Penguins and Flyers are destined to play a Winter Classic. And there is the Snider Youth Hockey Program, which will eventually develop NHL players.

In a cold bottom line, there is no disputing the lack of a third Stanley Cup in Philadelphia. Nobody in the city or the NHL takes losing harder than Snider, and it has tormented him over the years that the Flyers have not been able to hold another parade. But year after year, season after season, there are packed buildings realizing there is an effort to get back to the top.

Over the course of the years, the Flyers have consistently been among the NHL’s elite teams. Their winning percentage since their inception rivals any in the NHL. And under Snider, the Flyers have ventured onto every road possible to try and win.

Free agency. Trades. Coaching changes. They took on the NHL to get Eric Lindros. They howl at officials and buy out contracts. Hit them with your fists, smack them with your wallet, and then spend your time in the penalty box and come out and do it again – in front of a virtually full house night after night, season after season.

There has been money well spent and money ill spent – all in an effort to get back to the top.

Whenever somebody was put in charge, be it Paul Holmgren or Russ Farwell or Bob Clarke, Snider made sure they had the power to make such moves and if those moves did not work out, there was little hesitancy to move on to the next.

Unlike Dallas Cowboys owner Jerry Jones, there has never been a set of puppet strings from the Flyers ownership. Once the team’s management is handed over, there has always been a trust to make the necessary moves.

But if they haven’t worked, there has never been a hesitancy to make a change.

The most recent narrative around the Flyers is that the club grew tired under Snider, and it needed to change its so-called “culture.”

Nice buzzword “culture,” but if you look beyond the hollow catch phrase, you will realize that the overall culture has never been an issue. You can argue that the Flyers have needed to take a longer view in terms of development and maybe they shouldn’t go into every year maneuvering to win THAT Stanley Cup.

So, the Flyers mistake has been that Snider tries to win every year. And nobody should apologize for that.

Mistakes? You bet. They have given big contracts to players like Vinny Lecavalier who were at the end of their careers. There was the whole Ilya Bryzgalov mess in which Snider truly snapped and demanded the coach settle on one guy after Peter Laviolette played whack-a-mole with three goalies during the playoffs.

There are some that argue the team is stuck in the 1970s, always bringing in ex-Flyers to coach and run the team.

Take a look at the coaching changes. In addition to handing the reigns over to the likes of Bill Barber and Paul Holmgren, the Flyers have taken chances on college coaches like Mike Keenan and Dave Hakstol and have run the gamut from young, aggressive coaches like Peter Laviolette to veteran coaches such as Roger Nielson.

Like most NHL teams, the Flyers have churned out coaches and of the 13 since 1992, only six have been products of their organization.

One thing the Flyers have always done under Snider is admit a mistake and make the change, no matter what the cost. There was a time Snider did not want to use Russian (Soviet) players because of politics, but he realized that in order to have any real chance to win they had to change that policy.

Snider had to part with Clarke as a general manager.

Through it all, there is no questioning the effort and resources Snider has put into trying to win a championship. As a result, the Flyers remain one of the most recognizable and unique franchises in the world of sports and a crown jewel of the NHL.

And now, with Gostisbehere showing his stuff, and Sanheim and Konecny about to show their stuff for Team Canada in the World Junior Championships, maybe it’s a good time to say Happy Holidays to Ed Snider and the hockey fans in Philadelphia where the future looks pretty bright.