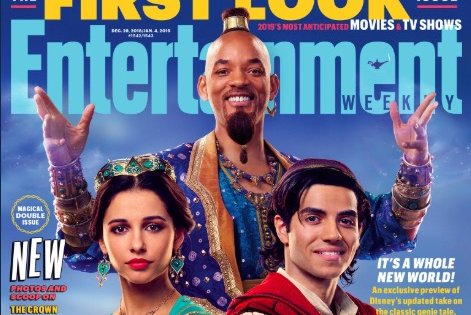 Will Smith stars as the Genie in Guy Ritchie's live-action "Aladdin."

An early peek at the live-action "Aladdin" is the cover story of the latest Entertainment Weekly, featuring Will Smith as the reimagined, and very not blue, magic genie.

Smith was selected for the job last year as the production from Guy Ritchie gained traction, briefly battling it out with another Philly-bred comic, Kevin Hart. Now, with a May 2019 release date, photos from the film breath new life into the world depicted in the 1992 animated Disney classic.

Smith inherits the role from the late Robin Williams, who made the glowing blue animated character hugely beloved. For the live-action remake, however, Ritchie chose to stay away from CGI and special effects, instead encouraging Smith to embrace the most bombastic parts of his own personality for the character – without going blue.

“The great thing about the role of the Genie is that it’s essentially a hyperbole for who that individual actor is, so it’s a wonderful platform and tapestry for an actor to fill his boots on,” Ritchie said to EW.

"So in stepped one of the funniest forces in entertainment: Will Smith."

We can show you the world... of Disney’s live-action #Aladdin! Get a shining, shimmering, splendid first look at the reimagined classic in our magical First Look issue: https://t.co/Kwkcdfen5v pic.twitter.com/7NbyiRRcLH

Smith also commented on the role's challenge, saying to EW, “The question is always: Where was there meat left on the bone? Robin didn’t leave a lot of meat on the bone with the character.”

The actor apparently tapped into his "Fresh Prince of Bel-Air" days for inspiration to bring to the role, describing the Genie as a cross between that character and that of "Hitch." The new film will also come with Smith's own rendition of the original movie's hit song "Friend Like Me."

Though the mystery over what Smith's version of the Genie would look like are somewhat staid in these new promotional photos, it's not entirely over. Ritchie said, because the film is still in production, a final, true rendering of what Smith looks like in the movie are not yet available.

Preview footage also features Aladdin and Jasmine, played by Mena Massoud and Naomi Scott, respectively, and a stunning look at filming from behind the scenes.