The Philly-bred fighter has gone from rags to riches... literally. 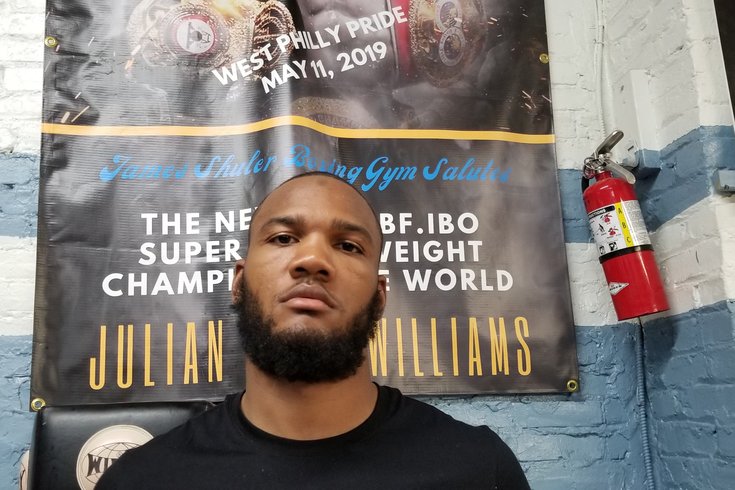 Julian Williams got out of his white Porsche and peaked down at his cell phone on a grey Monday afternoon as he walked into Shuler’s Gym in Southwest Philly, a concrete-hard area for hard men with hard faces.

As he entered the upstairs gym amidst the whomp, whomp, whomp of the heavybags being slammed, the one face that wasn’t taut belonged to Williams. That’s what happens to pro boxers after they fight. The martinet months of dieting and training are draining, so they allow themselves to get to little sloppy for a small spell, before going back to work.

“J Rock” had a reward coming — he deserved the downtime.

A month ago, he won what is currently the best fight in 2019, when he became the IBF, WBA and IBO junior middleweight world champion (154 pounds) by beating Jarrett Hurd by unanimous decision on May 11 — in Hurd’s backyard, in Fairfax, Virginia.

Williams, 29, is years away from being the homeless kid living in the Kirkbride Shelter on Roosevelt Boulevard in North Philly. Kirkbride is a combination shelter, drug rehab, and holding center for disruptive adolescents.

Yet, that part of his life will always hold a special place close to him.

Williams was a 13-year-old lying under a tattered green blanket on a mattress so thin he could feel the cot springs underneath. He’s always defined that time of his life as something “a lot of kids from North Philly go through.”

And those that do rarely go on to make monumental changes in their lives — as Williams has — and own beautiful single homes in Blackwood, South Jersey, with a few cars and enough bedrooms for his two children.

Williams (27-1-1, 16 KOs) is the quintessential “Philly fighter” — much like all-time great, and future Hall of Famer Bernard Hopkins, save for the prison stay. J Rock was not “fast tracked,” asked for nothing and received nothing. He rose without any distinguished amateur career. His early career was pocked with walk-out bouts and undercard fights before handfuls.

Now the world is tugging at him.

Though his orbit has changed, J Rock hasn’t.

“As far as me changing, not at all, that won’t happen to me,” vowed Williams, who has two daughters, a four-year-old and a six-month old. “Other than being a world champion, nothing has changed. I took some time off, and people look at you differently. The money changes. You have a lot more people reaching for your pockets.

“You do have to change some things, to an extent. People will see me by myself 90 percent of the time. I don’t have an entourage. I don’t travel in a pack. It’s just me and a small group of people when I’m scheduled to fight. I stay me.

“It’s why I look back at everything that’s happened to me, I don’t see it as the worst thing in the world — that I was homeless. It was normal for me. I’ve seen people go through far more that what I had to go through. I made it work.

“It was bad, but not end-of-the-world bad. I didn’t cry one time — f*** no. That’s not me. The world is today, everyone talks about depression. Not to demean what others go through, I didn’t experience that.”

He always was able to step outside of the world he was living in. Boxing was his sanctuary, his escape.

“I have always looked at the bright side,” Williams said. “At least I tried. You look at the present and you look at the future, because you can’t change the past.”

Then Williams stopped to check on a little fighter walking by at Shuler’s, asking how he did over the weekend.

To Williams, being a world champion, that’s important — that connection to the younger fighters.

“Rock bottom wasn’t even being homeless, and I know it’s not ideal, I pushed through that,” Williams said. “When my mom died, in 2013, that was it, that was rock bottom for me. I was training for the Hugo Centeno Jr. fight.”

June Williams was 53 when she died of congestive heart failure three weeks prior to his fight. Al Haymon, J Rock’s manager, asked Williams if he wanted to pull out of the Centeno fight. Williams said “no.”

Each weekend while training for Centeno, Williams would drive down to North Carolina to be with his ailing mother. The day after she died, Williams was out running the following morning.

“J Rock’s strength is his ability to deal with things — and not get nervous or excited about anything,” said Stephen “Breadman” Edwards, Williams’ trainer who has known him since 2007 and training him since 2010. “He can shut himself off from the outside world. When he was 13 in the shelter, J Rock was really 20.

“He’s always been very mature for his age. He keeps his people tight. He may have about six people in his dressing room before a fight. He doesn’t have eight million people milling around. He’s not going to pay someone to put his tie his shoes. Julian is extremely mentally strong — and disciplined.”

There is talk about a November rematch with Hurd—possibly in Philadelphia. Williams recently underwent minor arthroscopic surgery on his left elbow to clean out some bone chips. He’s still running and wears a sleeve over his left arm as it heals.

“It’s who I am — a fighter,” Williams said. “Everything that’s happened to me has defined me in some way. It’s helped get me where I am today—a world champion. I hope people appreciate me, because my struggle is like their struggle.

“I want to be Fighter of the Year and what I’m hearing is that I am fighting in November,” Williams said. “I was the walk-out bout in my pro debut on the Danny Garcia-Chris Fernandez undercard (Friday, May 7, 2010). No one was there.

“It would be huge for me to fight in my hometown — against Hurd. It would be a good thing. I understand where Steve is coming from, with family and friends pulling at you and being distracting when it comes to a hometown fight. People are pulling you a thousand different ways, they do.

“It doesn’t matter to me where I fight. I’ll be ready. I’m always ready. I plan on staying the same.”

A week after his victory over Hurd, Williams was walking in Manhattan after a radio interview. Someone stopped him on the street to ask if they could take a picture with him. Then more gathered around.

“It made me feel like a world champion — finally,” Williams said.