WrestleMania 40 to be held at Lincoln Financial Field in 2024

WWE's marquee event, last took place in Philadelphia in 1999. It returns for a weeklong celebration that also includes wrestling shows at the Wells Fargo Center 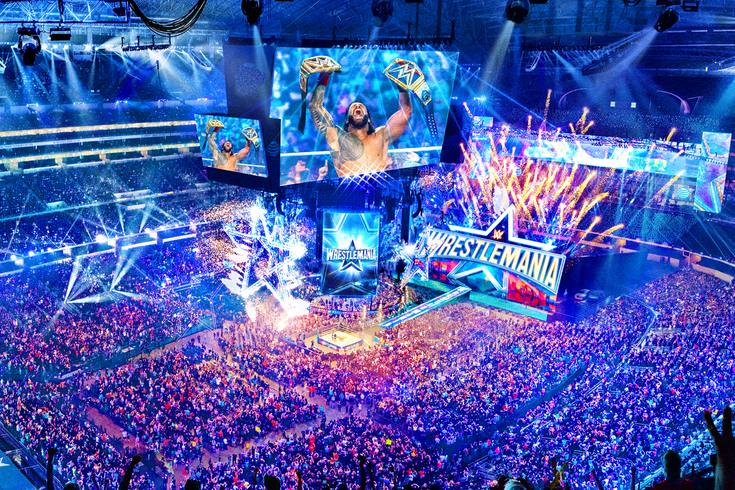 WWE's WrestleMania 40 will take place at Philadelphia's Lincoln Financial Field on Saturday, April 6, and Sunday, April 7, 2024. WrestleMania will be the culmination of a week of wrestling events that includes 'Friday Night Smackdown,' the 2024 WWE Hall of Fame Ceremony and 'Monday Night Raw' at the Wells Fargo Center.

For the first time since Stone Cold Steve Austin socked Vince McMahon in the face and dropped him with his patented Stunner, WWE's WrestleMania has plans to return to Philadelphia at Lincoln Financial Field in 2024.

The Eagles announced Wednesday that professional wrestling's main event – spread over two nights since 2020 – will be back in Philly for WrestleMania 40 on Saturday, April 6, and Sunday, April 7, 2024. The weeklong festivities will include "Friday Night Smackdown," the 2024 WWE Hall of Fame Ceremony and "Monday Night Raw" at the Wells Fargo Center, in addition to fan events at the Pennsylvania Convention Center and other community outreach events.

"The Philadelphia Eagles are thrilled to partner with WWE as WrestleMania makes its much-anticipated return to Philadelphia in 2024," Eagles President and PHL Sports Chair Don Smolenski said. "We are excited to help showcase the industry's most iconic event in front of a global viewing audience and look forward to providing WWE fans in attendance with a first-class experience at Lincoln Financial Field."

WrestleMania 40 joins a growing list of major sporting events and other celebrations planned in Philadelphia over the coming decade. The MLB All-Star Game will be played at Citizens Bank Park in July 2026 and Philadelphia also was selected as a host city for the World Cup that summer, with matches to be held at the Linc. Both coincide with the city celebrating the United States semiquincentennial, marking the nation's 250th birthday.

WWE continues to draw major TV ratings and attendance at its events around the country, and none is bigger than WrestleMania – the peak of the company's monthly pay-per-view TV events. Last year's WrestleMania at AT&T Stadium in Dallas drew 156,352 fans over two nights. Next year's event will be held at SoFi Stadium in Los Angeles.

"We are proud to welcome WWE fans from around the world to Philadelphia to be a part of the historic 40th WrestleMania in 2024," Philadelphia Mayor Jim Kenney said. "The weeklong series of events will help put a global spotlight on our great city while also generating a major impact for our local economy."

Plans for WrestleMania in Philadelphia come as WWE navigates the messy fallout of the retirement of its longtime CEO, Vince McMahon, who departed last week after reports surfaced that he paid $14.6 million to numerous women to keep them from going public with sexual misconduct allegations. McMahon had led the company's creative direction since 1982 and transformed the business into a global juggernaut at the intersection of sports and entertainment.

McMahon's son-in-law, Paul "Triple H" Levesque, has taken over the creative side of the business after retiring from in-ring competition in March.

WrestleMania XV, held in April 1999 at the Wells Fargo Center – then the First Union Center – drew a crowd of 20,276 and reported gross ticket sales of $1,437,050. The event marked a high-point of the former WWF's "Attitude Era," led by stars like Dwayne "The Rock" Johnson, Stone Cold Steve Austin, Mick Foley's Mankind, Triple H and The Undertaker.

"On behalf of WWE, we are thrilled to bring WrestleMania back to the City of Brotherly Love," said WWE Executive Vice President of Special Events John Saboor. "We thank all of our local partners who were integral in making this long-awaited return a reality."

The Eagles said additional information about WrestleMania 40 will be announced in the near future.