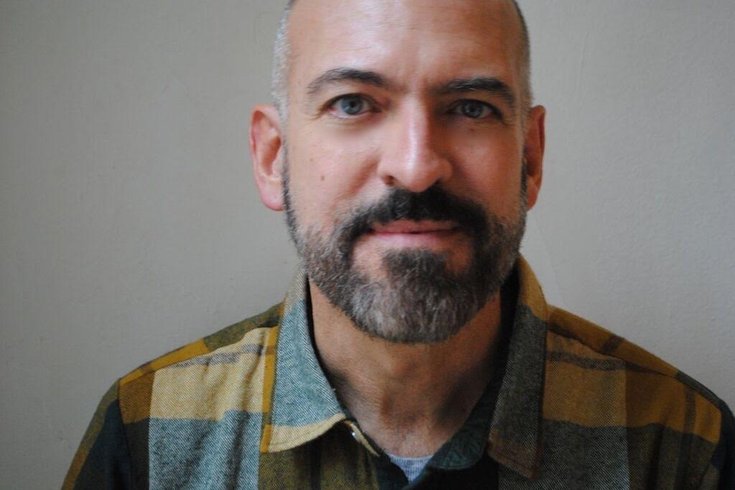 Our best friendships are almost always born of proximity. Neighbor kids who can’t avoid each other eventually become inseparable. Young work colleagues cling to each other for survival, then camaraderie. Our closest friendships manage to go the distance, too - over years, decades - even beyond death. Platonic love is more elastic than romantic love, this way.

Lovers “break up.” The severance is sharp and painful. But friends can go days, months and sometimes years without speaking. And still there’s hope of rekindling the heart. Because friendship is a lot like home: it’s as impossible not to leave as it is not to return.

This sort of deep, fatalistic friendship is at the heart of Philadelphia writer Paul Lisicky’s new memoir, "The Narrow Door," released last month. The story entwines the tales of Lisicky’s two great loves: his best friend, the late novelist Denise Gess, and his husband, a famous poet called “M.”

Lisicky met Gess in 1983 when they were both teaching assistants and burgeoning novelists at Rutgers University. The two became instant friends. They were nearly one and the same, both New Jersey-born creatives who were “Catholic school kids, children of social aspirants, grandchildren of immigrants from southern and eastern Europe,” yearning to “throw off those old coats of obedience," Lisicky writes.

"The Narrow Door" follows Gess and Lisicky as they navigate the waters of becoming famous writers, while both are also in love with famous writers. The book also illustrates the delicate balance between writing one's ideal book and the “big novel that gets big reviews, big sales, big money.” Should a writer try to strike gold at home or go where there’s a rush? When Lisicky leaves for the Iowa Writers’ Workshop, Denise stays behind and “digs deeper into Philadelphia.” For a time, their friendship fails. And then Denise is diagnosed with cancer.

There is reconciliation. But, as the two friends reunite, Gess’s cancer spreads from her lungs to her brain, to her heart, while Lisicky retreats from M, who has fallen in love with someone else. Loss is a cascade. In the midst of his own devastation, Lisicky obsesses over Internet footage of Earth’s snowballing natural disasters.

Crafted in Lisicky’s signature lyric prose, which has been praised by Slate as refreshingly quiet amid the modern stampede of “voice-y, jumpy, take-no-prisoners” style writing, "The Narrow Door" speaks softly and carries a big heart full to bursting with grief. And yet there is something magnificently uplifting about a tale of two souls connecting so well in a world that’s falling apart. For a story rife with so much loss, its takeaway is relief.

"The Narrow Door" also imparts the visceral joy of strolling through Philadelphia and along the Jersey shore, where Lisicky and Gess spent long afternoons scouting the perfect beach house for the protagonist in one of Gess’s novels.

“Those places were really important to Denise,” Lisicky told PhillyVoice. “Traditionally -- and I think this is changing -- Philadelphia was an indoor kind of city. But the shore was where Philadelphia got outside. Away from the city, there’s a broader sense of sky and weather and horizon line. And there’s always the possibility of change in the atmosphere, rising and falling tides, a weather front coming in. I think all of that was important to Denise’s creative imagination.”

Lisicky, on the other hand, describes himself as “pretty restless by nature.”

“My work thrives on stimulation. I need to encounter other places in order to see and think about where I live. I probably write out of a spirit of disorientation, whereas someone like Denise probably needed a certain sense of routine, in order to create.”

The author of "Lawnboy," "Famous Builder," "The Burning House" and "Unbuilt Projects" is back home, now. After teaching creative writing at Cornell University, New York University, Sarah Lawrence College, and the University of North Carolina Wilmington, he is currently a beloved and invaluable faculty member of the MFA Program at Rutgers University-Camden, where he is also the editor of the campus’s award-winning literary magazine, StoryQuarterly.

Established in 2009, the MFA program at Rutgers-Camden attracts a diverse group of writers from throughout the United States and abroad. The program unveiled its newly renovated Writers House at 305 Cooper Street this past November. The historic American Queen Anne Revival-style building’s new role as creative writing retreat has been characterized as a “beacon shining light on a world of possibility" throughout Camden and its surrounding area.

“I think it’s changing everything about our program,” said Lisicky. “It’s wonderful to hold workshops in a space with so much presence, where craftsmanship and integrity (rather than sheer efficiency) are in the foreground. How could that not influence how we write and think?”

The new Writers House is located just a few blocks from Camden’s landmark Walt Whitman House, where the poet spent his last decades. Lisicky was born at Our Lady of Lourdes hospital, which overlooks Whitman’s tomb, a coincidence not overlooked by "The Narrow Door." It seems, as with Gess and Lisicky, there’s a connection between all writers born of the same place, even when those commonalities aren’t immediately clear.

According to Lisicky, in such a diverse city as Philadelphia, where artists are “wildly different from one another,” what writers share most is their sense of independence.

“Maybe that’s the primary characteristic of our literary culture: Everyone’s pretty much working on his or her own thing.”

Of course, a truly gifted writer can do his own thing and strike a common nerve within us all. In this sense, "The Narrow Door" is exquisitely wide open.

Philadelphians can listen to Paul Lisicky read from "The Narrow Door" at Big Blue Marble Bookstore on March 5 and Biello Martin Studio on April 12.