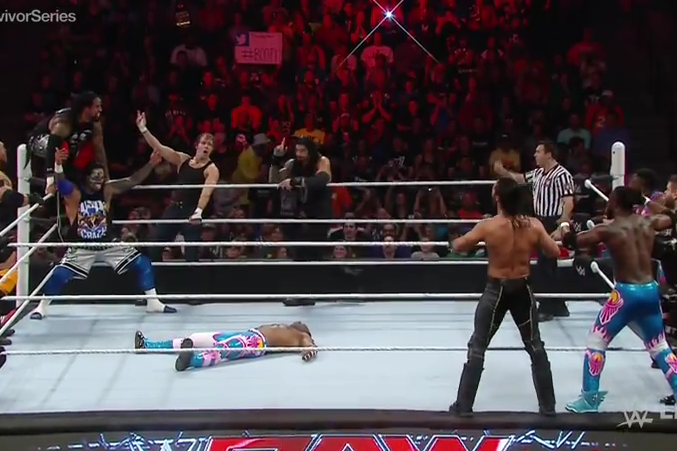 Off the heels of a pretty entertaining Halloween edition of SmackDown, the Superstars of WWE crashed the Pepsi Center in Denver, CO. The high altitude didn’t affect anyone, except maybe Triple H.

It was the second good episode of Raw in a row, and with the current state of WWE, that’s phenomenal. Storylines and angles were furthered; everything had a purpose – even the Cesaro/Miz match. Yes, it certainly seems like WWE is heading in the right direction, creatively, for the time being.

We’re three weeks away from the Survivor Series, but that didn’t stop The Authority from booking a traditional 5-on-5 Survivor Series elimination match, captained respectively by the WWE World Heavyweight Champion, Seth Rollins, and the No. 1 contender to his title, Roman Reigns. This came after Stephanie McMahon made the main event for Survivor Series official, with Rollins defending the title against Reigns.

Rollins didn’t seem to have any trouble finding his partners, lining up the Intercontinental Champion, Kevin Owens, after he had defeated Dolph Ziggler in a prior match, as well as the WWE Tag Team Champions, The New Day. Indeed, Xavier Woods was back and happier than ever.

What I didn’t get about this is how annoyed Rollins looked at the guys who are supposed to be his best friends. It wasn’t long ago they both posed for pictures and posted them on Instagram. There was really no reason for him to be annoyed by them, especially when he almost hesitantly accepted them as his partners for the match. Though, I did get a kick out of him singing and dancing with them.

Of course, The New Day’s promos before their matches have become must-see TV, and not just for their dancing. They’re classic heels right now. And that makes them so, so good.

And, really, who wouldn’t love guys that rock out to his theme song?

As for Reigns? We didn’t know his partners until it was time for the match. And his first teammates were quite the surprise.

The Usos are finally back as a tag team, which is good, because apparently one of them cannot exist without the other. Ryback and Dean Ambrose rounded up Reigns’ team.

After an entertaining bout, it came down to the final three – Reigns and Ambrose on one side and Rollins on the other. The Shield has really taken over WWE, and in a good way. The ending saw Rollins attack both Ambrose and Reigns with a steel chair, disqualifying himself in the process. He would then hightail it to the stage and a staredown would ensue as the program went off the air.

Bray Wyatt and his family came out to the ring for a promo, vowing to tell us something we would never forget.

“But a soul lives forever.”

“Unless, of course, that soul is consumed by a higher power. And I have become that higher power. And like I said, I wanted to give you something tonight that you would never, ever be able to forget. So tonight, allow me to enlighten you to the fact that me, I, Bray Wyatt, and my family have successfully harvested the souls of The Undertaker and Demon Kane.”

"I SUMMON THE THUNDER! I SUMMON THE LIGHTNING!" - @WWEBrayWyatt #Raw pic.twitter.com/hysW9ky81Y

HAs @WWEBrayWyatt indeed taken on the souls and POWER of The #Undertaker and @KaneWWE? #Raw pic.twitter.com/HCQhwiilDX

Yes, it seems as if the new Face of Fear has stolen the unhuman powers of the Brothers of Destruction, Undertaker and Kane. And, you know what? I think that’s awesome. Sure, why not? I’m not going to get mad about some sort of crazy gimmick that has to do with magic, because we all have loved it since 1990. Is it conceivable in professional wrestling today? No. But, it’s a good storyline and good angle, and it’s a great way to make Wyatt that feared entity he once was years ago.

There was a Divas match that actually meant something! Finally! We were treated to a fantastic Fatal Fourway match to determine the No. 1 contender to Charlotte’s Divas championship, featuring Sasha Banks, Becky Lynch, Brie Bella and Paige. The match featured great wrestling, phenomenal moves, and the right winner.

Paige nailed the RamPaige on Lynch to get the victory, and then gave a pretty good heel promo in the ring after the match. As much as I’d love to see Banks and Charlotte have their series of matches on the main roster, if they save that match until WrestleMania, I’m okay with that. Paige and Charlotte’s storyline just makes sense the two begin a feud that lasts a few months, and I wouldn’t even mind them trading the title back and forth. The two will meet for the title at Survivor Series.

Charlotte had some words for her challenger after the match.

And Paige responded, saying Charlotte wouldn’t be where she is without her dad’s name. Ouch.

Looks like we’ve got some serious business finally in the Divas division.

We saw the return of Jack Swagger to television on Monday night. He confronted his old manager, Zeb Colter, about his newfound tolerance for other countries, and, to be frank, races – something that he never had as Swagger’s manager. Alberto Del Rio then came in and told Swagger to stay away from Colter.

What was very awkward about this segment was that it portrayed Del Rio and Colter as the heels and Swagger as the face. Except the entire storyline right now is that Del Rio and Colter are preaching tolerance and reconciliation between two nations. Isn’t that admirable? Borderline heroic, maybe? The way it came across television was confusing, especially if it was trying to paint Swagger as the sympathetic figure.

I’m really digging the slow build to a Tyler Breeze-Ziggler match. Breeze has been a thorn in Ziggler’s side, and hasn’t even been in a match yet on television.

What’s going on with Stardust and The Ascension and their obsession with Cesaro? This has been going on for a while now, but nothing has been advanced to make us care. I guess I care now.

And the Lucha Dragons of all teams getting a video package before their match!? This was a pleasant surprise. They work well as a tag team, and I’d like to see them more in prominent tag team matches on Raw and SmackDown. We’ll see if this is just the beginning.

On a serious note, I’m happy to report that Jerry Lawler and his girlfriend, Lauryn Laine McBride, are both recovering at home after being involved in a serious car accident this past weekend. Lauryn suffered serious injuries, but she was released from the hospital a few hours after the accident. Here’s an update on their condition, via WWE.com:

“I’m fine, but Lauryn is pretty banged up. We had taken care of the trick-or-treaters and went for pizza right near the house. We were coming home to catch the end of the University of Memphis game. I was sitting at a red light at a busy intersection not a minute from my house. I got the green arrow to make a left turn. I started making the turn and I saw the car coming, not slowing down at all. The driver ran a red light.”

Lawler continued to say, “Lauryn was in the ER for four hours. Her face is really, really swollen on the left side. They also put her in a leg brace and knee immobilizer. I think she has a concussion because this morning when she got up, she fell down and saw stars and black spots.”

Of course, there’s nothing good about sustaining a concussion, but in this situation, it’s almost considered the best case scenario.

You can read more about the incident here.

• Cesaro d. The Miz by submission via the Sharpshooter.

• The Lucha Dragons d. Sheamus and King Barrett by pinfall via the Salida del Sol.

o Jey Uso eliminated Xavier Woods via a splash from the top rope.

o Jey Uso eliminated Kofi Kingston via a splash from the top rope.

o Rollins was eliminated by disqualification after hitting Ambrose and Reigns with a chair.

• Reigns and Ambrose are your survivors.