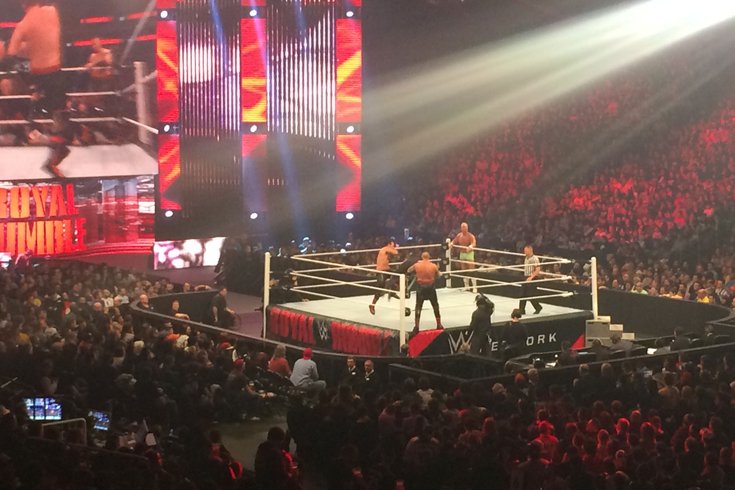 The scene from the Royal Rumble at Wells Fargo Center.

In what turned out to be the match of the night -- by far -- it was Brock Lesnar pinning Seth Rollins to win the WWE championship.

From the start, the fans showed no love for John Cena, who was the first to enter the ring. Lesnar and Rollins received much better ovations, but it was hard to tell who of the two had more support. With Paul Heyman ringside, Lesnar came out firing, landing at least seven or eight suplexes before anyone even touched him.

He’s a beast. Literally. He made two grown-ass men look like children for the first several minutes of what turned out to be a match for the ages. At one point, he lifted both members of J&J Security -- one in each arm -- over his shoulders and suplexed them at the same time. Then he landed a German duplex on Rollins and another on Cena, and just stood over the two of them as they tried to scrape themselves off the mat. For the first five or so minutes, Lesnar just tossed the two men back and forth across the ring.

He finally took Cena to the mat in a submission hold, yet somehow Cena was able to lift him -- yes, Brock Lesnar -- from a squat position.

And what was his reward? Just Rollins’ elbow to the face off the top rope. But that wasn’t the worst blow. He caught Lesnar with a knee to the back of the head.

Then Rollins and Cena, while not working together per se, began beating up on Lesnar. Once they got the champ out of the ring, they took turns kicking him into the steel stairs until he looked out of it. And with Lesnar down, the two smaller fighters -- relatively speaking, of course -- had a better chance of pinning one another than either did of pinning Lesnar. It may not seem fair that Lesnar can lose his belt without actually losing the fight, but hey, that’s what happens in a triple-threat match.

And just when it looked like Cena was about to pin Rollins, Lesnar came in to stop him.

This is the part where things got really fun.

Rollins again tossed the champ out of the ring, but Cena countered and nearly pinned him for the win. Then, as Paul Heyman went to check on Lesnar, Rollins almost pinned Cena, but Lesnar returned to the ring to break it up just in time and toss Rollins out of the ring. He then absorbed two clotheslines from Cena without so much as a flinch, before ultimately being driven to the mat on the third attempt.

As Cena went to pin Lesnar, Rollins pulled him out of the ring, and climbed to the top rope to try to finish off Lesnar.

Not so fast, young man.

But that’s far from the end of this match, as Cena pulled Lesnar off Rollins just in time, only to get suplexed by Lesnar … again.

With both Cena and Rollins sprawled out, Lesnar left the ring and began terrorizing the broadcasting table, smashing monitors and tearing it to pieces.

But when Lesnar returned to the ring, Cena was laying in wait. He hit the champ with three-straight Attitude Adjustments (A-A’s). Somehow, that wasn’t enough.

He kicked out of the pin just as Rollins made his way back to the ring to pull Cena out and throw him into the stairs. With Lesnar barely back on his feet, Rollins bounced off the ropes and curb stomped Lesnar.

It looked like Rollins was about to win, but again that pesky third fighter, this time Cena, came flying back into the ring just in time.

Now, with all three fighters sprawled out in the middle of the ring, the crowd started to sense this match had the potential to be special.

Lesnar was the first to his feet, and he slid out of the ring to talk to Heyman. Out of nowhere, Cena crashed into Lesnar from behind, taking him through the barrier and into the seats. As Lesnar struggled to his feet, Cena tossed him into the steel stairs, nearly taking out Heyman in the process. He then preceded to pick up part of the stairs and use knock Lesnar onto the announcers table, the same one Lesnar had ripped the monitors out of moments before.

Rollins landed a cheap shot from behind on Cena, and with Lesnar still laid out on the table, Rollins decided to take the match to the next level. He climbed to the top rope and elbow dropped Lesnar through the table. Again, all three fighters were down -- this time outside the ring. And again, the fans loved every minute of it.

Cena was able to get to his feet, and threw Rollins back into the ring. As the two exchanged blows -- including several near-finishes -- Heyman began screaming for a doctor, and a stretcher was brought out for Lesnar.

Back and forth they went as Lesnar remained down on that shattered table with medics standing over him. Every time Cena came close to pinning Rollins, the crowd grew more upset.

But then, just as it looked appeared as though Rollins was about to finish Cena and win the title, Lesnar -- like a sweaty, jacked-up Lazarus -- came back to life and suplexed Cena, ending his day, before absorbing two suitcase shots to the head from Rollins.

Lesnar then lifted Rollins over his head and laid down an F-5, putting Rollins out and securing the victory.

Most of the time when a title is retained, it’s thought of boring or sub-par. This, ladies gentlemen, was anything but that.

And after the 30-man Royal Rumble that followed left fans with a sour taste in their mouths, the triple-threat match turned out to be by far the best fight of the night, and could be one of the best of the year when all is said and done.

Unfortunately for WWE, Lesnar is planning to leave wrestling and make a return to UFC this summer, which isn’t going to be good for business.

Imagine what that show would have been had Brock Lesnar not been on the card. Yeah, he's likely gone in a few months