Before you share that meme, America: A plea for basic media literacy this election season 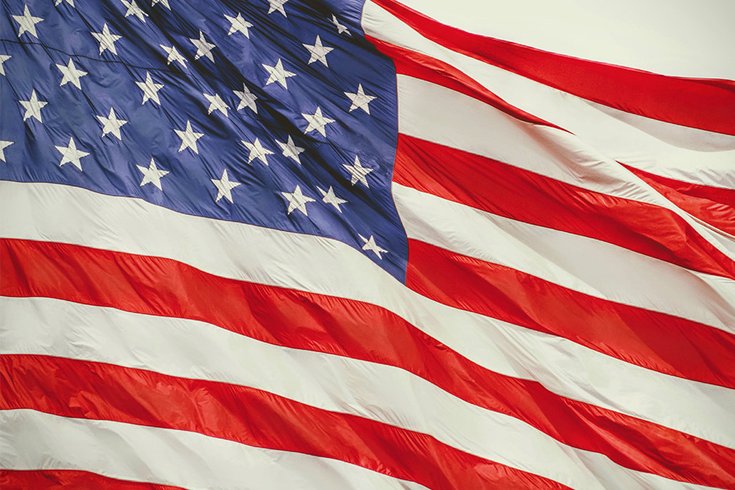 Photo by Joshua Hoehne /on Unsplash

Tell me, what do these two memes at right have in common? Answer: Both are false. 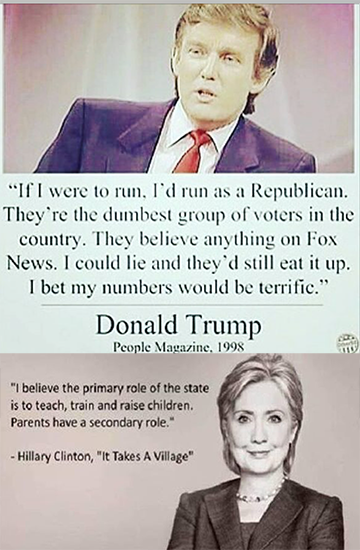 Someone somewhere sat down at a computer, pulled up photo of Hillary Clinton, and concocted an overt lie. The same is true with regard to whoever falsely attributed the above statement about Republican stupidity to Donald Trump.

I’ve seen both of these memes make a few appearances on my Facebook feed this election season. One post featuring the Clinton meme above was shared more than 10,000 times. Yet, it is false. She never wrote those words or uttered them but thousands of Americans now believe Hillary Clinton wants “the state” to raise their children.

Truth matters. Truth is not the property of any individual. It is the property of us all, worthy of our ardent protection. Eighteenth-century German philosopher Immanuel Kant taught: “Act only on that maxim through which you can at the same time will that it should be a universal law.” Would you want people making up ridiculous statements and attributing them to you? Would you want people to do this to your beloved ones? Should medical professionals or engineers concoct all sorts of phony information leading to deadly surgical techniques or collapsing bridges? No, I don’t think so. Even one example of tampering with truth sows distrust whether in science, politics, or in our personal relationships. Think of the last time someone you love lied to you. How easy was it to believe her or him again?

It’s not “elitist” to assert that we strengthen the bonds that keep our human family healthy when we tell the truth. It’s not elitist to fact check claims in order to base political reflections upon truth’s framework. Even as people casually blow time scrolling through their social media feeds – liking articles or sharing memes/quotes/videos – truth matters.

“But how do I check it, Amy?” asks Frank, an older friend of mine. Yesterday, I kindly pointed out a falsified meme he shared widely. Now we speak via phone.

Frank and I have little in common politically but our friendship spans decades. I admire him a great deal even if I reject his conclusions about gun control, for example. One thing we do agree upon: truth is important. Today, Frank is embarrassed. He has discovered that Thomas Jefferson didn’t actually argue people should bear arms to protect themselves from “the tyranny of the government.” Frank feels remorse for reposting a meme with a concocted quote as truth.

“Take the first sentence of the quote and type it into a search engine,” I instruct. “You should be able to notice right away if the quote is attributed to another person or if it triggers a report from a fact-checking website.”

“I understand. I’ve been there.” I proceed to tell Frank about the time I posted a meme misattributing a beautiful quote from author Iain Thomas to Kurt Vonnegut. It was shared over a thousand times. A friendly heads-up led me to promptly correct the post. Frank is not alone in making this type of mistake.

“Thanks so much. Thanks for your keen eye and this pointer on how to dig up the truth. Give my love to your family,” he says before we say goodbye.

When it comes to calling out memes or social media posts featuring overt lies, we must be particularly wary of the corrupting influence of “confirmation bias.” We all have a tendency to seek out information that confirms our worldview and disproportionately refute or ignore information that contradicts cherished assumptions. For example, confirmation bias was at work when I could see through Frank’s Jefferson “quote” but my affection for Vonnegut obscured.

I’m no Trump fan. I agree with the GOP national-security advisers who recently argued that he is “utterly unfitted to the office” of the presidency. On nearly every issue from LGBTQ rights to climate change to immigration reform to the need for sensible gun laws, I stand against him. Furthermore, due to articles I’ve written defending the rights of Muslim Americans, Trump supporters have called me awful names. “Christ hater” comes to mind. Given this, upon seeing a meme depicting a photo of Trump and an ignorant statement, I’m not very motivated to fact check. Why? The quote confirms my bias against him. On the other hand, I’m far more motivated to fact check an ugly or ridiculous quote attributed to those I admire.

Confirmation bias is at work every time we scroll through our blue or red Facebook feed. It takes diligence to counter this tendency. I count myself lucky because my Facebook feed is both blue and red. Love for family and friends across the political divide helps counter the pull of confirmation bias.

Since the Vonnegut incident, I do my best to fact check all memes before sharing them, especially if they “feel true.” I’ve even committed myself to defending Trump when he is falsely represented. For as I engage in heartfelt and respectful debates, I want the discussion to center on truth. Trump’s words may not connect to actual events in our world but we shouldn’t have to debate whether or not he said them.

Some may argue that truth is all about perspective or that truth is only found in the eye of the beholder. But how to “behold” either of the memes shared at the beginning of this article as true? You can’t. The claimed speaker did not say these words. No amount of “perspective” can change that. Yes, once facts are put on the proverbial table, people can and should debate their relevance based upon life experiences, observable data, privilege, and perspective. But we first need to have the basic facts put on the table first, sans corruption.

False data only obfuscates. It damages something precious that belongs to all of us. Therefore it is incumbent upon us all to safeguard truth and verify the validity of memes, quotes and claims before passing information along. Basic media literacy is a must, particularly during this uniquely difficult election season.