The Pennsylvania brewery is also released a bourbon-aged beer 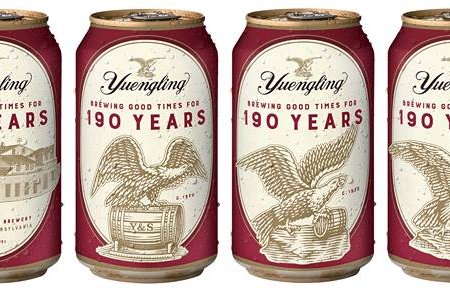 For its 190-year anniversary, Yuengling is releasing label designs inspired by the 1880s.

To celebrate its 190th year brewing beer — the longest of any brewery here in the U.S. — Yuengling is releasing some commemorative products.

This month the Pottsville, Pennsylvania-based company started releasing a series of limited-edition beer cans, each outfitted with a different design label. Each shows off how the brand's look has evolved since D. G. Yuengling & Son brewery opened in 1829.

There will be five different releases, starting in December and ending in April. Each design prominently features either the brand's redesign of the signature eagle or a depiction of the original Pottsville brewery — which was called Eagle Brewery when it was founded.

The brewery is also showcasing a Bourbon Barrel Reserve beer this year for the anniversary. According to USA Today, the beer was aged for 120 days in the bourbon barrels stored in hand-dug caves under the brewery. Apparently those caves hadn't been used in the making of beer at Yuengling since Prohibition.

The bourbon-aged brew will be available Jan. 11 at Yuengling's Pottsville, Pennsylvania location.