10 reasons the Cowboys will be a dumpster fire this season 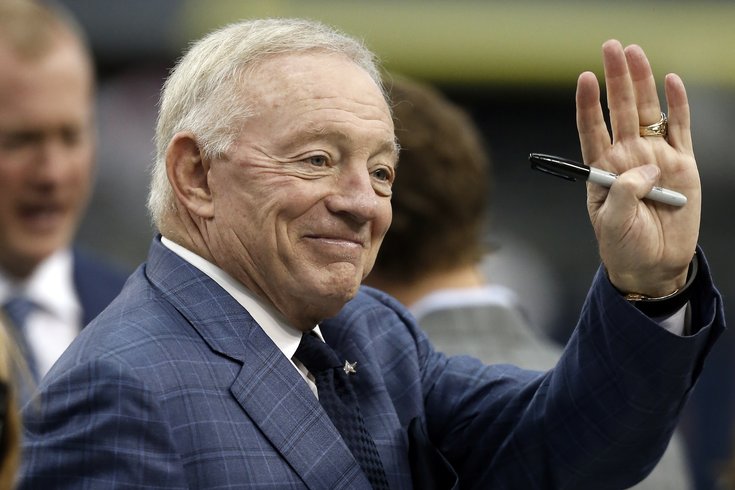 Jerry, non-verbally show me how many games the Cowboys won last year.

This week, all week long, we're taking a brutal look at each of the teams in the NFC East, in detail. The first target will be the last place 4-12 Dallas Cowboys. To note, we will not be talking about the positives of any of the Eagles' NFC East rivals, because, well, that's no fun. This will be 100 percent vitriolic. And don't worry, Yankees Warriors Cowboys fans -- we'll roast the Eagles, too.

Remember when Tony Romo was a plucky young up-and-comer? No? Me neither. He's 36 years old now, and the fourth oldest projected starting quarterback in the NFL: 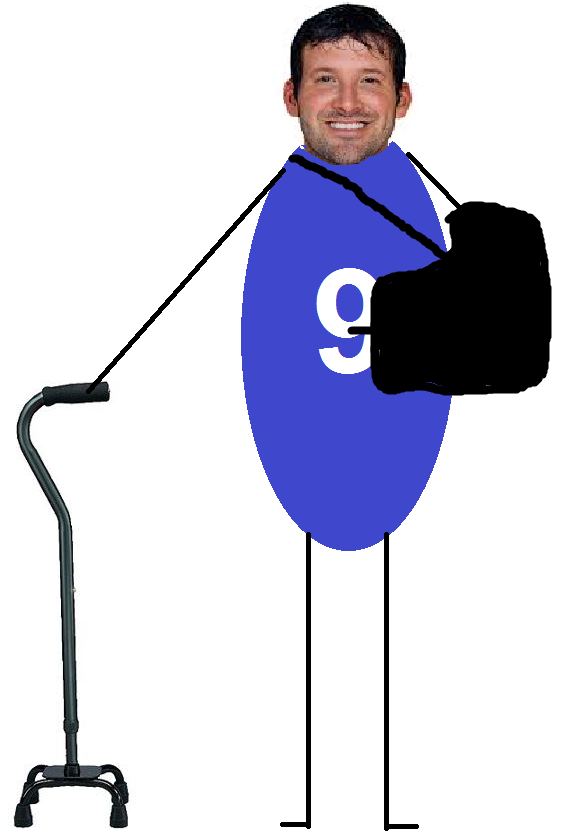 Prior to the draft, Jerry Jones said that Tony Romo will be the Cowboys' QB for next 4-5 years and that they'd make all draft decisions accordingly.

But, yeah... Jerry Jones' draft strategy was formulated around the idea that Romo will play another four-five years. Mmhmm.

2) It's not even as if the Cowboys were good when Romo played last season.

If Tony Romo didn't get hurt last year, the Cowboys would have gone 16-0 during the regular season, and then went on to win the Super Bowl. Or so I've been told by Cowboys fans.

The reality is that the Cowboys stunk without Romo, but it's not as if Romo was good last year and played a positive role in the rare wins they collected when he was able to go. Romo started four games last season:

• Giants: Romo played well and the Cowboys won, but the NFL admitted that the officials gift-wrapped that win for Dallas. The Cowboys really should have been 3-13 last year, not even 4-12.

• Eagles: Brandon Weeden entered this game in relief of Romo with 5:24 left in the third quarter, and the Cowboys' offense had put up just six points at that point in the game.

That's not to say that Romo's uninspiring play in 2015 will be predictive of his 2016 season. If he's healthy, he can certainly be the good quarterback he's been for most of his career. But let's stop with this notion that the Cowboys were going anywhere last year if Romo stayed healthy.

3) The Cowboys didn't learn their lesson about going into the season with a crappy backup QB.

In 2015, the Cowboys went into their season with Brandon Weeden as their backup. Literally everyone except for Jerry Jones kinda knew that was a bad idea. Oh, and this guy: 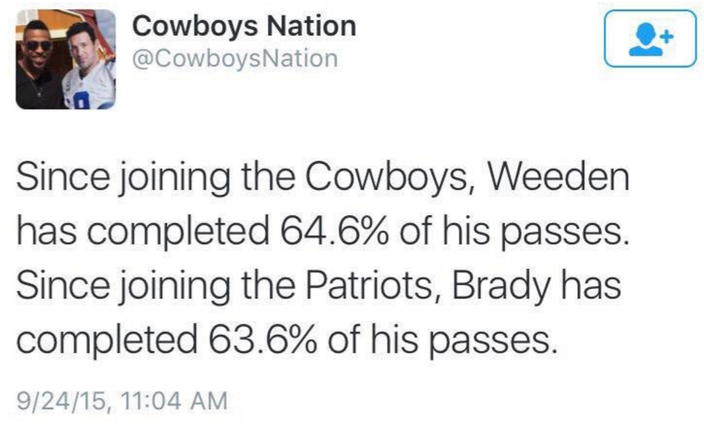 In 2016, barring some other Hail Mary signing or trade, it'll either be Kellen Moore or Prescott.

Prescott had a good short passing game at Mississippi State, and running ability. However, he had major accuracy issues in the intermediate to deep passing game, which also happens to be where the Cowboys like to operate. He probably has a long way to go before he can play any meaningful role in the NFL.

So that likely leaves Moore as the primary backup, whose arm strength is demonstrated here:

What do you think of your backup QB situation, Jerry?

During training camp last offseason, Greg Hardy funded a plane with an accompanying trash talk banner to fly over Lincoln Financial Field during one of the Eagles' practices. This is what it said.

Sacks didn't come (or in Hardy banner vernacular, #SACKSDIDNTCOME), and Hardy is not one of dem boyz anymore. To be determined if he'll fly another banner over the Linc this year.

First of all, LOL at CB Orlando Scandrick leading the team in career sacks. 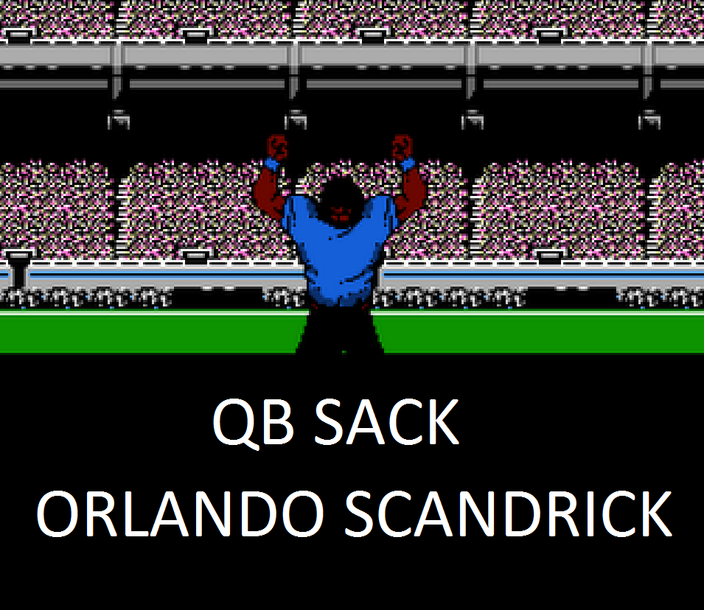 But also, as you can see, the Cowboys' entire team has 62.5 career sacks. There were 19 players who were active during the 2015 season who have more.

Oh, and the Cowboys' leading sacker a year ago was Demarcus Lawrence, who had eight. Unfortunately for the Cowboys, Lawrence is facing a four-game suspension to start the season, as is Randy Gregory, who was basically invisible as a rookie.

5) The Cowboys can't stop the run.

Here is where the Cowboys ranked in various run defense stats in 2015:

In 2014, the Cowboys were able to run the ball extremely effectively with DeMarco Murray. They stayed on schedule on early downs, and were able to convert 3rd and manageable situations. That kept their crappy defense off the field, and they rode that formula to a 12-win season. In 2015, part of the reason their record flip-flopped from 12-4 to 4-12 was that they couldn't keep opposing offenses from essentially doing that same exact thing to them.

The Cowboys added Cedric Thornton, who is a good run stopper along the defensive line, but that won't be enough.

While the Cowboys were unlucky to lose Tony Romo for big chunks of time last season, they had the fortune of a rarity in the NFL -- an offensive line that stayed intact (injury-wise) all season long.

Four of their five starters played the entire season, while the fifth, La'el Collins, was an in-season addition to the starting lineup, hence his lower number of snaps played. That just doesn't happen often in the NFL.

In 2013, the Eagles were fortunate to have good health along their OL, which was an enormous reason for their success that season. In 2014, they experienced some injuries up front, and it cost them games.

Credit the Cowboys offensive linemen for showing durability, but their luck is going to run out there eventually, and their questionable OL depth could be tested.

This also feels like an appropriate spot to note that the Cowboys' best player on defense, Sean Lee, had a rare healthy season in 2015. Well, healthy by Sean Lee standards, who is literally made of dandelions. 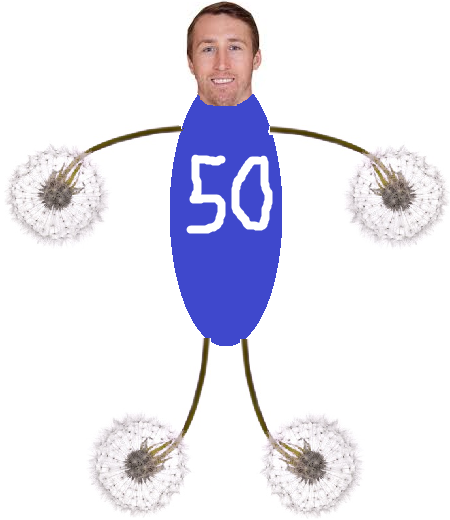 Getting back to the offensive line, unquestionably, the Cowboys have a good one, particularly in the run game, where it is excellent. In fact, when we published our Preseason All-NFC East team, three of the OL spots were occupied by Cowboys players, although a number of folks made the fair argument that the Giants' Weston Richburg may be better than Travis Frederick.

The Cowboys have a great run blocking unit. In pass protection, they're average. They also commit a lot of penalties. In 2015, the Cowboys had 57 offensive holding or false start penalties. That was the third-most in the NFL. The league average per team was 45.9.

I mean, the entire offensive line stayed healthy in 2015, and the Cowboys still only won four games.

Jason Witten was a great tight end for a long time, but his best days are behind him. Once upon a time, he and Tony Romo used to bring their girlfriends to Cabo instead of getting ready for a playoff game. Nowadays, Witten spends his free time feeding ducks in the park. Probably. 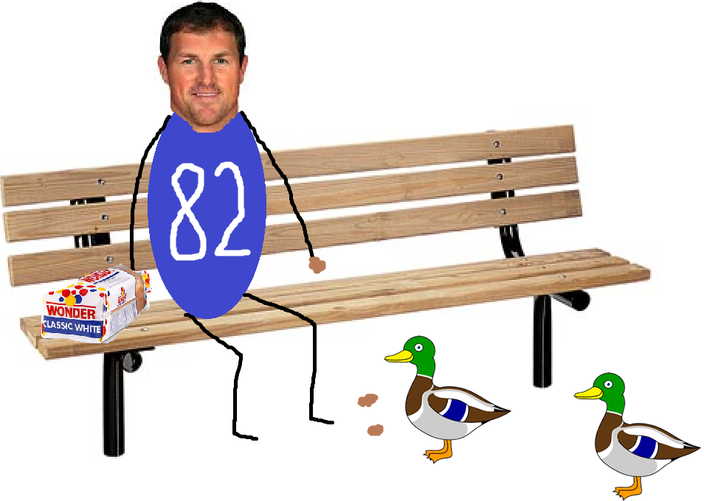 Witten is the third-oldest projected starting tight end in the NFL, and then there's a wide gap thereafter:

After Witten, there are four players who are 31 years old. Witten's numbers are very clearly in decline:

By the way, Is 2013 second round pick Gavin Escobar ever going to do anything?

9) Does anyone on that defense make plays?

There are two ways one could look at that. On the one hand, you could come to the conclusion that their takeaway total has nowhere to go but up. That's probably true. On the other hand, it could serve as an indicator that the Cowboys grossly lack players on the defensive side of the ball capable of making splash plays.

I've long been on record that running back Ezekiel Elliott would not have been good value at pick No. 8 before the Eagles traded up to pick No. 2. At pick No. 4, where Dallas landed Elliott, that is atrocious value.

Elliott is really, really good, as is any player who is being drafted in the top 10. This is in no way a slight against Elliott, rather, it's about the value of drafting the position he plays at the fourth-overall pick.

Running backs take a pounding in the NFL. Their bodies wear down, and even the good ones rarely make it beyond the age of 30. But the bigger issue I have with the pick is that there are an inordinate number of great running backs set to enter the NFL Draft next year. It would be much better value to get a marginally less talented back in the second round in 2017 than Elliott at fourth overall.

Anyway, the rebuttal I've gotten from Cowboys fans to that argument is something to the effect of this: 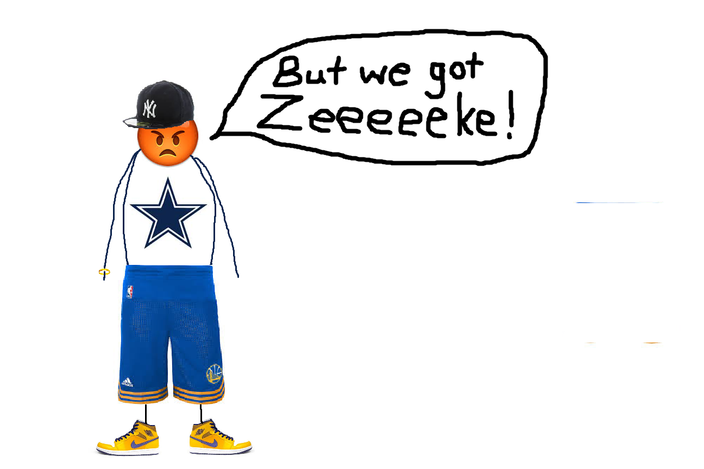 Yes, congrats. You got Zeke, and again, Zeke is really good. Most people (self included) think Zeke is the most likely Rookie of the Year candidate in 2016. Cool, right?

Zeke is also going to have a boatload of pressure on him. In 2014, as noted above, the Cowboys rode DeMarco Murray into the ground on their way to a 12-win season. By running the ball effectively, as noted above, Dallas kept their crappy defense off the field and took pressure off of Romo. The latter will be of heightened importance in 2016, as Romo will be returning from injury. In other words, there's an argument to be made that Zeke is the second most important player on the team in terms of the Cowboys' success in 2016, after Romo.