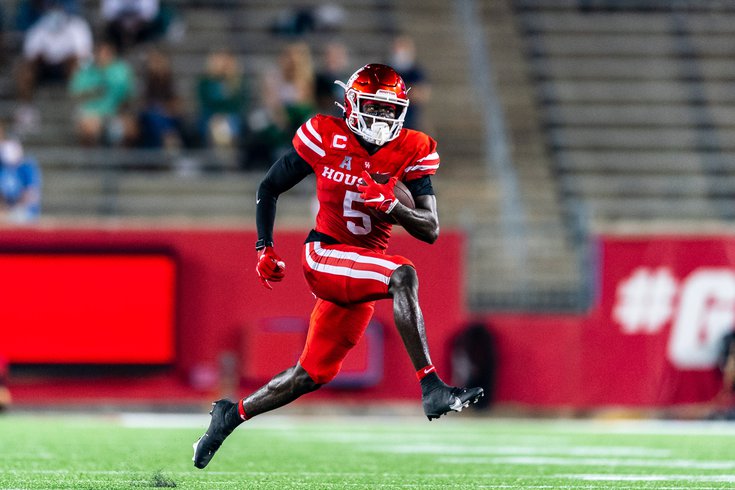 The Philadelphia Eagles have like 30 sixth-round picks, so let's give them a lot of options here.

• Jamie Newman, QB, Georgia: Newman is a bigger quarterback who possesses a lot of the same skills (mobility, power, a good enough arm, and poise under pressure) as Jalen Hurts. He has also struggled with accuracy, like Hurts. If Hurts proves that he's a starting caliber quarterback during the 2021 season and Newman can develop into a capable backup, then the Eagles wouldn't have to completely change their offense should Newman have to enter a game for Hurts in 2022 and beyond.

• Dazz Newsome, WR, North Carolina: Newsome is a slot receiver with some juice who had 72 catches for 1018 yards (14.1 YPC) and 10 TDs in 2019. That production fell off a bit in a loaded UNC offense in 2020, when he had 54 catches for 684 yards (12.7 YPC) and 6 TD in 12 games. Still, he can threaten defenses down the field, he creates separation underneath, and he has some toughness, as he tries to maximize his yards per catch on every reception.

• Seth Williams, WR, Auburn: Williams is a bigger receiver who wins in contested catch situations. He's good around the goal line on slants, fades, and back shoulder throws, and he'll go up and out-muscle defenders for passes deep down the field.

• Shi Smith, WR, South Carolina: Smith is tough, fearless, and can make catches in traffic. In that sense, he is sort of a souped up version of Greg Ward with more speed.

• Marlon Williams, WR, UCF: In the eight games Williams played in 2020, he had a monster season, as his average receiving line was something close to 9-130-1. Williams looks more like a running back than a receiver, and like guys with similar builds in the NFL like A.J. Brown and Deebo Samuel, he is YAC machine.

• Sage Surratt, WR, Wake Forest: Surratt is a big, physical receiver with good hands, body control, and contested catch ability, along the same lines as Alshon Jeffery and J.J. Arcega-Whiteside (college version). He does not possess impressive speed. Also like Arcega-Whiteside, Surratt has an impressive off-the-field resume, as he was once committed to Harvard, before deciding he could get a similar education at Wake Forest while playing football in the ACC. In high school, he was a star basketball player, and the Valedictorian of his senior class.

• Simi Fehoko, WR, Stanford: Fehoko has an impressive blend of size and speed (unofficial Pro Day 4.37 40) who has a floor as a special teamer. That might give some folks a Mack Hollins vibe, which, alright, not the comp Eagles fans want to hear, but this is the type of player you try to draft and develop in Round 6 when you have 11 picks.

• Kenny Yeboah, TE, Ole Miss: Graduate transfer from Temple who broke out in his final collegiate season at Ole Miss, catching 27 passes for 524 yards (19.4 YPC!), and six TDs in seven games. He played a more traditional tight end role in college. In the pros he'll be more of a "move TE," AKA an F, and could pair nicely with Dallas Goedert.

• Patrick Johnson, DE, Tulane: Johnson is a high energy pass rusher with burst who was third in the nation with 10 sacks. Since 2018, Johnson has 24.5 sacks, 6 forced fumbles, and 11 batted passes.

• Tarron Jackson, DE, Coastal Carolina: Jackson is a short, thick pass rusher with 18 sacks his last two seasons (23 games) at Coastal Carolina. He is known as a power rusher with hand fighting ability, and (Andy Reid alert!) a high motor, which are sort of a necessary traits given his lack of height.

• Cameron McGrone, LB, Michigan: McGrone has good speed, and he can cover a lot of ground from sideline-to-sideline, or on drops into coverage. He has also shown the ability to time out blitzes, and get to the quarterback quickly.

• Dylan Moses, LB, Alabama: Moses was being recruited by LSU and Alabama when he was heading into eighth grade. He eventually landed at Bama as a five-star recruit, with prototypical size and athleticism. After strong freshman and sophomore seasons, he was heading into the 2019 season as the leader of the defense, and was being projected as a first-round pick, but an ACL tear in August of that year ended his season. In 2020, Moses was just OK, and was unable to regain his 2018 form. He is thought to "breathe football," even though he considered quitting football due to knee pain and the loss of his grandmother to COVID.

• Charles Snowden, LB, Virginia: Snowden is a long, lanky, spider-like linebacker for Virginia who could perhaps develop over time into something of an Anthony Barr role in the Eagles' defense under Gannon. Over the last three seasons, Snowden has 13.5 sacks and 28.5 tackles for loss, so he clearly has the ability make plays on the other side of the line of scrimmage. He also had 15 pass breakups and a couple of INTs over the last three seasons, and could be a good fit in a defense playing a lot of zone because his length and long arms can get in the way of throwing windows.

• Kary Vincent, CB, LSU: Vincent is a fast slot corner with good ball skills and a bunch of highlight reel INTs. He'll lay a nice hit every now and then, but is otherwise thought of as a bad tackler.

• Ar'Darius Washington, S, TCU: At 5'8, Washington is going to be an automatic no for some teams at the safety position, but the Eagles have shown in recent years that they don't care as much about height on the back end. If you can get past his height, Washington is a really good player, with speed, ball skills (5 INT in 2019), and a willingness to hit.

• Richard LeCounte III, S, Georgia: LeCounte is a ballhawking safety, as he had four INTs, two FFs, and three FRs in 2019. In 2020 he had 3 INTs in just 5 games. He is also smart, and well-liked by his teammates, coaches, and Georgia's media, and he has become a leader on the field, communicating calls and alignments to the rest of the secondary. Tackling was an issue.

• Trill Williams, S, Syracuse: Played outside corner, slot corner, and safety at Syracuse. Running a 4.59 40 means he'll be a safety in the pros, and he has the physicality play there. I like him as a third safety who can fill in at a number of spots, including covering bigger slot receivers.

• Pressley Harvin III, P, Georgia Tech: Harvin is a 6'0, 255-pound tank who averaged 48.0 yards per punt in 2020, and won the Ray Guy Award. He also has some intriguing athleticism, which could be utilized on fake punts.

• James Smith, P, Cincinnati: Left-footed punter, if the Eagles are into that, like they were during the Chip days.