3 players who make sense for the Eagles at the trade deadline, 2.0 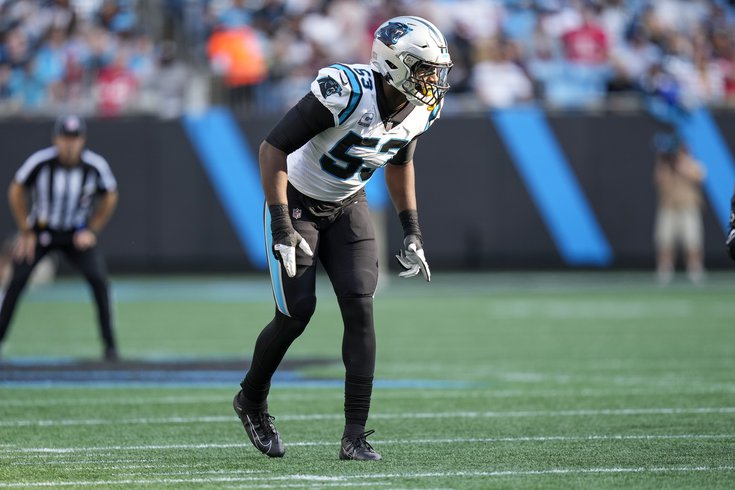 If you hadn't noticed after the first five games of the 2022 regular season, the Philadelphia Eagles are good. Expect Howie Roseman to try to make them even better at the trade deadline.

We suggested three other players a couple weeks ago, and also rounded up all of Howie Roseman's trade deadline deals since he reassumed his general manager position in 2016, if you're interested in that.

The Eagles have good edge rushers in Haason Reddick and Josh Sweat, but their depth took a hit when they lost Derek Barnett for the season. If they can add some juice to their pass rush, the defense will just be that much more dangerous. The addition of a player like Burns would be an "all in" type of move, and would come with a very high cost. But holy crap, the Eagles' pass rush would be very scary.

Burns is only in his fourth season, and he has 29.5 career sacks. He has 4 sacks in 5 games this season. He is a fast, explosive, long and lean edge rusher. A look:

If you watched that video in full, you also saw that he has a Spider-Man celebration, which would fit in with the Eagles' Batman celebration. Or would that cause a DC vs. Marvel disruption? I'll leave that debate for the comic book nerds.

The Panthers fired Matt Rhule on Monday, and it is believed that they could be looking to dump players for draft assets.

Burns is still on his rookie contract, and his salary this season is only $2,341,389. The Eagles could easily fit him in. He is scheduled to make a little over $16 million on his fifth-year option in 2023.

At just 24 years of age, Burns fits the profile of a player the Panthers can still build their defense around, and as such wouldn't make as much sense to trade away than, say, a guy like Christian McCaffrey, for example. But there's always a price, and if I'm Carolina, the Saints' first-round pick that is owned by the Eagles would tempt me.

If the Eagles are looking to just add some depth on the edge (as opposed to making a huge splash), Green is a versatile inside-outside defensive lineman who would make a lot of sense for the Eagles in Brandon Graham-like role.

Green had 48 tackles, 6.5 sacks, 15 QB hits, and 4 batted passes in the final year of his rookie contract with the Seahawks last year. Some highlights from that season:

He signed a one-year deal with the Texans this offseason, after the draft no less, and his deal only has a base value of $2.75 million. I suppose that's a red flag, because a young defensive lineman with promise is the profile of a player who should have gotten interest on the first day of free agency.

In four games this season, Green has been productive. He has 18 tackles, 2.5 sacks, 5 QB hits, and a batted pass in a non-starting role. A Day 3 pick would be a pretty nice return on investment for the Texans for a guy they signed in May.

Moreau will make the plays that come his way in the passing game, but his greater appeal as a No. 2 type of tight end is as a blocker.

Jack Stoll is a good blocking tight end for the Eagles when they utilize two-TE sets, but he is not a threat in any way as a receiver, as he has 1 catch on 2 targets for 4 yards on 148 snaps. When he is in the game, opposing defenses may as well just consider him an extra offensive lineman. Moreau would keep defenses a little more honest in respecting him as a receiver, as he had 30 catches on 44 targets for 373 yards and 3 TDs in 2021. He would be an upgrade at that No. 2 tight end spot, with Stoll settling into a role as the extra guy in 13 personnel.

The Eagles also have Grant Calcaterra, who has shown some receiving chops, but has a long way to go as a blocker.

The Raiders are now 1-4 after their tough loss to the Chiefs Monday night, and Moreau is in the final year of his rookie contract. It's worth noting that Moreau missed the last two games with a knee injury, though it wasn't serious enough to land him on injured reserve. He has otherwise been a durable player throughout his career.