Some Christians believe abortion is murder, but history and the Bible disagree

In 1974, the Southern Baptist Convention affirmed the need for the procedure in many cases. But the Religious Right later took an anti-abortion stance and Republicans have since used it to court voters 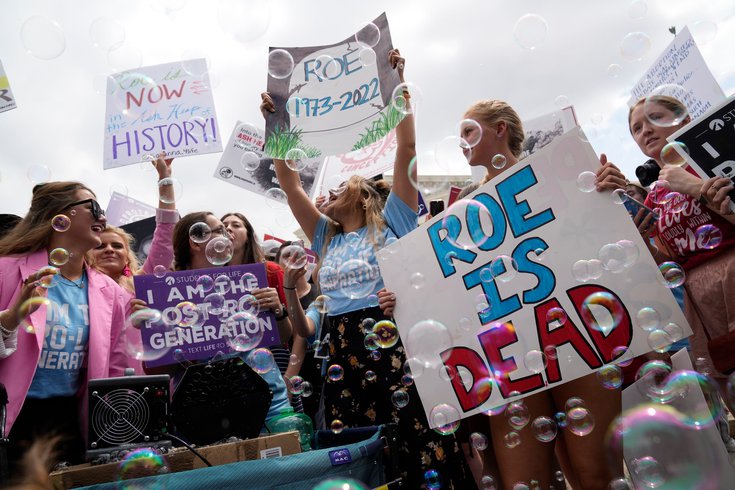 Anti-abortion demonstrators react outside the Supreme Court in Washington after the decision in Dobbs v. Jackson Women's Health Organization overturned the landmark 1973 Roe v. Wade decision that established a constitutional right to abortions.

To many Christians, who believe in the so-called "sanctity of life," abortion is a clear moral case. They believe abortion is like killing a person. Sometimes opponents of abortion even describe it as "murder." This aggressive and moralistic language is not only shaming and demeaning to people who have had abortions, it is imprecise in its language.

The reason we have inadequate language around abortion is that it is such a politically important issue for Republicans. Rather than having a reasonable discourse about reproductive health and reducing unwanted pregnancies, Republicans use moralizing language to describe abortion because it moves voters. To be clear, such language doesn't actually help with health care, safe pregnancies or the flourishing of life.

When we equate abortion with murder, we are trying to use deafening language to silence dialogue about the complicated matter of the ethics of abortion. When we refuse to see abortion as a matter of liberty and health care, we are dehumanizing people as incubators. We are saying that their lives don't matter so long as they are pregnant. We are giving more rights, more dignity and more humanity to their fetuses, than to those who hold them. It is possible to live in a world where everyone receives dignity. But it doesn't start with naming abortion as murder, or proclaiming that a potential life is more valuable than a real life.

The Bible is largely silent on the ethics of abortion, so Christians in general need to approach this issue with humility. In the Hebrew Scriptures, the ones that would inform all of the New Testament writers, notably Paul and Jesus, it is clear that life begins at birth (Genesis 2:7). In Exodus 21:22-23, causing a miscarriage isn't seen as a serious injury, and isn't punishable as murder. Only if there is a serious injury to the person is that a cause for further punishment. And in Numbers 5:11-31, we are given direct instructions for inducing an abortion when there has been infidelity. In other words, abortion was permitted.

None of these passages are particularly germane for our understanding of abortion, but rather, they help us know that the Bible is not as clear-cut about this issue as many Christians seem to think it is and as many Christians are. The Bible does not offer us any definition of life that suggests it occurs at conception or when a cluster of cells forms. And so to claim that abortion is murder or even killing is a stretch biblically speaking.

Christians believe this, not because of independent thought but because of manufactured thought. Abortion is a political issue that helps move voters, as I said above. And so the messaging around it loses any nuance because it is an essential matter in mobilizing political power. Let me say it another way: those in power want to simplify the ethics of abortion because calling it murder wins them votes.

In fact, in the 1970s, after the Roe v. Wade decision, the Southern Baptist Convention affirmed in 1974 (and again in 1976) the need for abortion in many cases. After the decision was made, W.A. Criswell, who was a former president of the SBC and pastor of First Baptist Church in Dallas (whose current pastor is Trump acolyte Robert Jeffress) said he was happy with the ruling. "I have always felt that it was only after a child was born and had a separate life from its mother that it become an individual person and it has always, therefore, seemed to me that what is best for the mother and for the future should be allowed," Criswell said, according to Randall Balmer's "The Making of Evangelicalism."

What galvanized the Religious Right in the 1970s was the issue of segregation as it specifically related to its continuation at Bob Jones University. A precedent set by a lower court ruling, Green v. Connally, made segregation illegal at Bob Jones. And in 1971, the university admitted Black students, but forbid interracial dating and marriage (and did not admit unmarried Black students). Eventually, the tax-exempt status of Bob Jones was revoked. Faced with no political activities and positions to galvanize its base, the Religious Right turned to abortion as the issue to champion. From its inception in evangelical circles, abortion was purely a political issue, not a morally complex one, Balmer wrote.

Abortion's politicization has made it an issue that we can't seem to discuss. Prominent Christians everywhere are celebrating the Supreme Court decision to overturn Roe v. Wade, and the most "moderate" among them, are proclaiming GOP hypocrisy on gun rights, the death penalty, and other issues that they think pertain to life. But this logic – that you can be a pro-life "womb to tomb," or you can be a "whole lifer," presupposes the conclusion that abortion is murder. But the religious tradition, biblical record and political history of the issue suggests that was never a foregone conclusion. In fact, it is only a foregone conclusion now, because of how it has been leveraged for political power.

So to consider the ethics of abortion, let us consider how we view bodily autonomy.

Should you have the right to not donate a body part of yours to save another human's life? In other words, if an organ of yours could be used to save the life of another, should the government require you to give it away? Should the government tell you that your body is less important than someone else's?

It is conceivable that you think that we should donate our bodies for the sake of others. That is a philosophical question, one that I do not think Christians should come down hard on. This kind of sacrifice takes discernment and time to consider. We may disagree, but I think many of us would agree that there is room for disagreement.

Maybe you are so impassioned about the need for self-sacrifice that you think the government should force us to do it (but that would be in line with the voluntary service and sacrifice of Christ). But, for those of us that don't, let us consider why we expect pregnant people to do the same with their bodies. It cannot be because we think a fetus is a real life, alone. We have to also think that a pregnant person's life is less than. We think that people should be compelled (by the state) to sacrifice their lives for a fetus.

So it is not a matter of seeing a fetus as a real life, but also one that concludes a uterus carrier's life is less than that of a fetus. Abortion is an issue that is worth discernment. Those affected must be elevated as the most important people in the dialogue. How they sacrifice their bodies is up to their discernment. For some, it's a complex matter and for others, it's an easy answer. We must allow space for personal discernment to occur, because it is not clear cut, just as it is not clear cut when we should donate a kidney or bone marrow.

When people who aren't directly affected enter the dialogue, too often, they are using rehearsed political arguments to make their point instead of dealing with the complexity of the matter. We live in an interdependent society and world. We owe each other love and sacrifice, but when it comes to the issues of our bodily autonomy and sacrifice, the answers aren't clear and we need space and liberty to discern them. We don't need a ham-fisted ideological response that's purely meant to whip voters.

Jonny Rashid has been pastor of Circle of Hope in Philadelphia for more than 10 years. He is an abolitionist and a housing activist. He is an avid cook, who blogs at jonnyrashid.com and hosts Circle of Hope's "Resist and Restore" podcast. He studied journalism, education and history at Temple University and completed his masters of divinity at Palmer Theological Seminary. His book "Jesus Takes A Side" came out May 31.