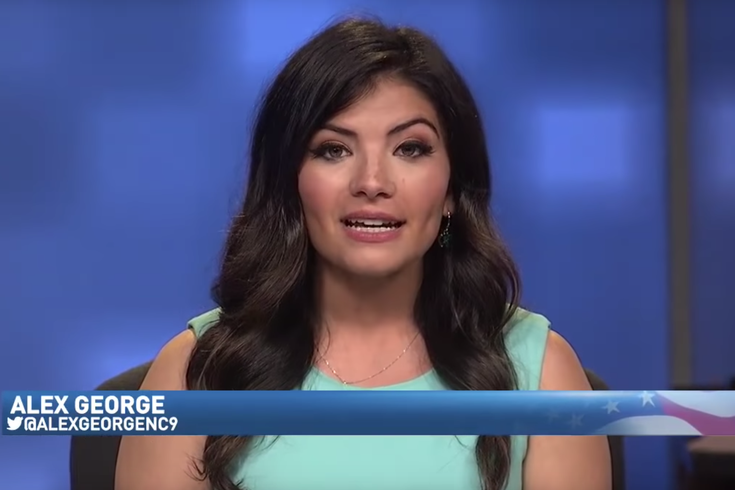 A still from Alex George's cancer announcement in May.

A 22-year-old Moorestown, New Jersey, native was fired from her Sinclair Broadcasting job in Chattanooga last month, six months after she announced she was battling cancer and one month after being named the best reporter in Chattanooga in a people’s choice vote.

Alex George, formerly of Chattanooga’s News Channel 9, announced her firing a week and a half ago on Twitter:

I wanted to share that sadly I will not be returning to work at WTVC. It was not my decision and I had hoped to come back to Chattanooga to continue telling your stories. I cannot begin to express how grateful I am for all the good wishes and prayers y’all have sent.(Cont)

Hi all, I want to clarify for those who asked. I want to assure you that treatment is going incredibly well. The decision was not made by me it was @WeAreSinclair. They terminated my contract.

George had said during the on-air announcement of her cancer diagnosis in May that she was heading home to the Philadelphia area to receive treatment for her disease – a rare form of bone cancer – but she planned on returning to the station:

George was a Fox29 intern in Philadelphia two summers ago, and attended the University of Michigan as an undergraduate. She graduated from Moorestown High School when she lived in New Jersey.

According to the Chattanoogan, George received a call in mid-November from Sinclair informing her of the decision, and her profile is no longer on News Channel 9’s website. The Chattanooga Times Free Press reports her job was terminated six months early.

Curiously, the Chattanoogan also reports the station’s general manager stepped down one week after the decision to fire George came down.

Sinclair reached out to GQ and provided this statement on the company's handling of George’s employment:

“Out of respect for the privacy of our employees, Sinclair does not comment on specific personnel matters. We would like to note, however, that Sinclair not only provides leave and other accommodations as required by law, but also routinely provides additional time off and other benefits above and beyond what is legally required. In addition, Sinclair’s long-term disability benefits are provided at no cost to our employees, which allow qualified individuals to continue to receive up to 66 percent of their salary during their period of disability. We have also expressed to Alex that once she is ready to return to work, we would be happy to meet and explore possible roles for her. Until that time comes, Sinclair and the WTVC family will continue to pray for Alex’s recovery, and we wish her and her family the best.”

Sinclair’s news coverage has been subject to scrutiny in the last six months for promoting a right-wing agenda. Most notably Sinclair required that anchors on local news broadcasts at its 200-plus television stations across the U.S. read the same script about “fake news.”

Four Pennsylvania stations were among those affected by the Sinclair mandate, which also became a target of comedian John Oliver on "Last Week Tonight."

Publicly, George herself has spent the last week and a half replying to some Twitter mentions with gratitude, and generally handling the situation as well as she possibly could be expected.