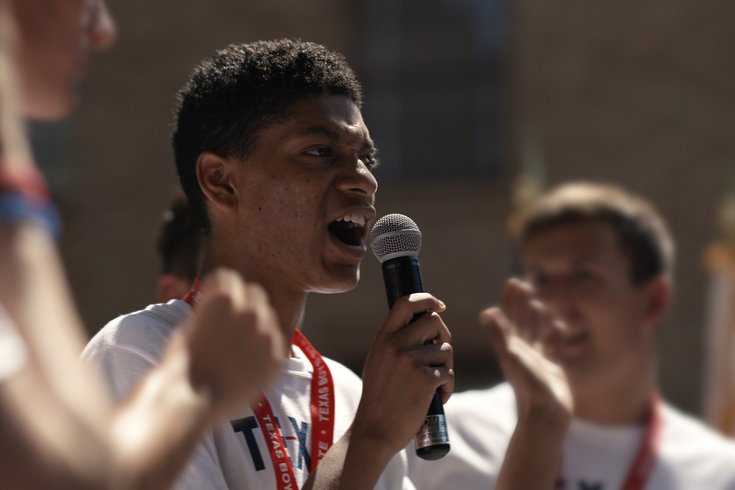 'Boys State' on AppleTV+ follows attendees at the week-long leadership program in Texas as they rise from being unknowns to positions of prominence.

A nationwide summer camp for teenagers interested in pursuing careers in politics or the military is the topic of a recently release documentary on Apple TV+.

"Boys State" tells the story of Texas' annual gathering of rising male high school seniors, brought together to examine the importance of politics and government. The documentary's title comes from the actual name of the camp, which is held in almost every state across the country. State also have equivalent programs for rising female high school seniors called Girls State.

The film follows a number of Boys State attendees as they learn about the importance of democracy. Each of the profiled attendees goes from relative unknown status to a prominent leadership position by the end of the week-long summer leadership and citizenship program.

Based in the state capital of Austin, the film is a perfect watch for political junkies. It's also a great tune-up and watch before the 2020 general election this November.

For me, the film hits a bit different – I'm an alumnus of Boys State.

Back in the summer of 2011, I attended Jersey Boys State. New Jersey's program is held every June at Rider University in Lawrence Township, Mercer County.

Nationwide, Boys State has an impressive alumni contingent too. Notable attendees since the program began in the 1930s include President Bill Clinton, Vice President Dick Cheney, and conservative commentator Rush Limbaugh. As a Boys Nation Senator in 1963, Clinton had the opportunity to meet President John F. Kennedy at the White House.

I was nominated during my junior year in high school to attend Boys State. After being nominated, I interviewed with the local American Legion post, the group which is responsible for selecting Boys State attendees and running the program.

After being selected for the program, all those who had been picked from my county gathered at the American Legion post and were bussed down Interstate-195 to the statewide conference for the week.

Being selected is a huge deal, especially for teenage boys hoping to attend either the U.S. Military Academy at West Point or the U.S. Naval Academy at Annapolis. Having Boys State on a resume can give himself a leg up when seeking admission into either institution.

Once one arrives, ID badges and the iconic "Boys State" white shirts must be worn at all times as the week-long uniform. Each attendee is assigned to a city, which is how housing is determined for the week. Each city is assigned a Boys State counselor. Wearing their identifiable blue polos, the counselors are typically past participants of the program or American Legion members.

After their city and counselor, Boys State attendees, to the annoyance of George Washington, are assigned to one of the program's two political parties: the Federalists or the Nationalists.

While state's programming, Texas Boys State and Jersey Boys State seems to be run very similarly based on the documentary.

The heart and soul of the week-long experience is the formation of a city, county, and state governments. It can be seen best through the election of several officials, including Boys State Governor.

The camp's other elected officials are Boys Nation Senators. Like governors, senators hold one-year terms. Two per state are elected, and each attends a national version of the conference called Boys Nation in Washington, D.C.

Getting elected is not easy, as I learned. I first was elected city manager, and then lost when running for Boys Nation senator as a member of the Nationalist Party. After losing, I bounced back to earn a spot on the party's chairman committee.

Campaigning for office in Boys State is not too different from a real political campaign. It involves waking up early to run around the campus to get votes. It means late nights working on speeches and campaigning. It means partaking in lots of voting and activities.

Simply put, it's not for everyone. If you really want it, you have to earn it through hard work.

"Boys State" does an excellent job of capturing that experience for the documentary. It doesn't shy away from the cut-throat, contentious process to get votes and support. Every boy attending is extremely driven and highly-motivated, so everyone is out to get their own in a way.

But what one will take away from the movie is that the program's participants want nothing more than to have careers in public service, and that Boys State teaches them the x's and o's of how government and politics work.

After premiering at the Sundance Film Festival earlier this year, "Boys State" can now be streamed on Apple TV+.