It’s something, growing up in the Delaware Valley area, which becomes ingrained through time. It’s a passion that courses within you, becomes a part of your DNA to pass along to future generations. Regardless of where you may move, or what vocation you may follow, that staunch, unrelenting and often times unrequited love of the Philadelphia Eagles never goes away. Not if you grew up in the Philadelphia area and your father lived and died with the Eagles-like Michael Burbidge’s father, Fran.

For more than 30 years as season ticket holders, father and son yelled and screamed from the 300 section behind the visitor’s bench at Eagles’ games, coming home with hoarse voices. They sat together in Philly’s version of the frozen tundra watching the Eagles win NFC championships at the since-torn-down Veterans Stadium in 1980, and among the snow drifts at Lincoln Financial Field in 2004.

Fran passed away in 2011. Michael, 59, a Broomall, Delaware County native and 1975 Cardinal O’Hara graduate, still worships his hometown team — the bond with his father still there.

But Michael Burbidge has a bit of a friendly dilemma on his hands these days.

A graduate of St. Charles Seminary in Wynnewood and ordained a priest by John Cardinal Krol in 1984, he’s risen through the Roman Catholic Church and is now Bishop Burbidge—the newly-minted prelate of the Diocese of Arlington in northern Virginia. In other words, Washington Redskins country, the division rival that will host his beloved Eagles on Sunday at FedEx Field.

“We all live demanding lives, and the quality time was spent at Eagles games. That’s what made it special for me, because I was there with my dad.” – Bishop Michael Burbidge, Eagles season ticket holder, 1975-2006

Burbidge's transfer came after a decade as the bishop of the Diocese of Raleigh, North Carolina. On December 6, he’ll officially become Bishop of Arlington, leader of a diocese that serves more than 400,000 Catholics in 69 parishes in 21 counties, and five missions. But Burbidge already has discovered that Redskins fans are just as zealous about their team as the Eagles faithful.

“In Raleigh, North Carolina, you can say you root for the Eagles, or the Steelers, or any team, because so many people there are transients,” said Burbidge, who received his graduate degree from Villanova and doctorate from Immaculata. “They’re not originally from that area. No one blinks when you tell them you root for the Eagles, or the Steelers, because they’re from all over the place. Now this is Redskins territory and around here, they are really serious. They’re as serious as Philadelphia fans are.

"I remember my press conference (announcing him as the Bishop of Arlington), I mentioned I’m an Eagles fan. There weren’t too many smiles around. I’ll root for the Nationals, I said, but I have to root for my Eagles. No one even smiled. I looked around and thought this wasn’t good.” 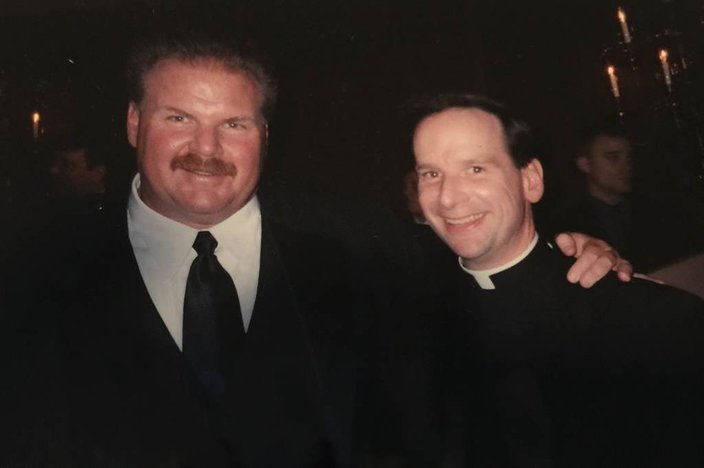 The Rev. Michael Burbidge smiles for a photo with then-Eagles coach Andy Reid. The bishop's favorite Eagles player was running back Wilbert Montgomery.

QUALITY TIME ON THE 50-YARD LINE

Burbidge still has strong family roots in the Philadelphia area. He has a brother in West Chester, a niece in Ridley Park and a nephew in Havertown. From 1975 to 2006, he and his father made the weekly trek down to South Philly for Eagles home games. The 25-minute rides seemed more like a rite of passage, a father’s gift to his son. That release each week from reality was something Burbidge cherishes to this day.

“We all live demanding lives, and the quality time was spent at Eagles games. That’s what made it special for me, because I was there with my dad,” Burbidge said. “We went down to the games and spent that time as father and son. You don’t get those memories back. As a priest, there is a lot going on and when I went to the games, I was a total fan. I wasn’t worried about anything else for those three hours.

“You put aside the other cares and you were part of that crowd. During the years, we sat in the same section and it was a reunion each time around the 300 section, right on the 50 behind the visiting bench. You spend over 30 years of that and it does become a part of you."

The communion with his father at the stadium began when Burbidge was still in high school, then continued through the seminary.

"I hear that there are a lot of Redskin players in the Arlington Diocese. I’ll have to be careful." – Burbidge, joking

"We had the full participation at the tailgates, but we behaved. We received the full flavor of being in the parking lot before an Eagles game, though," he recalled. "We got to know the people around us. They were like an extended Eagles family each home Sunday. It was a good section. They were there to watch the games. None of them were sent to the basement at the Vet.”

Burbidge served as curate at St. Bernard's Church in Philadelphia until 1986, and then taught at Cardinal O'Hara from 1986 to 1990. For the next two years he served on the faculty of Archbishop Wood High School in Warminster, Bucks County, then becoming dean of students at St. Charles Seminary in 1991. He was secretary to Anthony Cardinal Bevilacqua from 1992 to 1999, and raised to the rank of Honorary Prelate of His Holiness in 1998. In 1999, he was named rector of St. Charles Seminary. He was made an auxiliary bishop in 2002.

It was a great situation, because he was living in Philadelphia, among family and friends. Life didn’t change much until 2006 when Burbidge was made the bishop of Raleigh by Pope Benedict XVI. With that, he sold his season tickets on South Broad and became a Southerner.

In 10 years there, he learned to call it home.

“It’s why this move to Arlington is so bittersweet,” admitted Burbidge, whose favorite Eagle was running back Wilbert Montgomery. “It was a big shift, but in 10 years there in Raleigh, I learned to love it. It’s why it’s very difficult to leave right now.”

AMID CHANGES, NO WAVERING ON BIRDS

On Sunday, Sept. 25, Burbidge was connected to his Eagles. He typically tapes the games, but on that Sunday he was able to watch live the second half of the Eagles’ 34-3 victory over the Pittsburgh Steelers. Burbidge turned off his cell phone, and when the game was over, he wanted to share the victory. He called family and friends, and noticed he had a message from the Apostolic Nuncio in Washington, D.C., the pope’s representative in the United States.

“It was how I found out Pope Francis made me the new Bishop of Arlington. I hear that there are a lot of Redskin players in the Arlington Diocese. I’ll have to be careful,” he joked.

His new home is a 15-minute drive just outside of Washington, D.C. He can see the Washington Monument from his office, which he’ll adorn with pictures of Lincoln Financial Field, shots of him with former Eagles coach Andy Reid and other assorted ties to his favorite team. He sold his season tickets the year he left for Raleigh in 2006. Now, he’s challenged with new responsibilities in a much larger Catholic population. Where everything around him is changing, his one touchstone remains the Eagles.

“God has work for you to do, and that’s what you do,” Burbidge said. “I’m blessed. I had 10 wonderful years in Raleigh. The Church is giving me a new assignment in a beautiful diocese near the nation’s capital, to which I would say that I’m truly honored. I’m happy to do whatever the Lord tells me, it’s a promise I made the day I was ordained as a priest.

“I look back at all of my assignments, and I wouldn’t have predicted this path. I didn’t want to teach high school and I was sent to teach high school. I ended up loving teaching high school. I didn’t want to end up working in an office building, and it turned out to be a great experience. Every assignment I’ve had wasn’t necessarily what I felt, but it’s always worked out. I think it’s because of someone with a bigger plan steering it.”

Even as he ministers to the Redskin faithful, His Excellency said he hopes that path will someday lead to watching the Eagles win the Super Bowl.