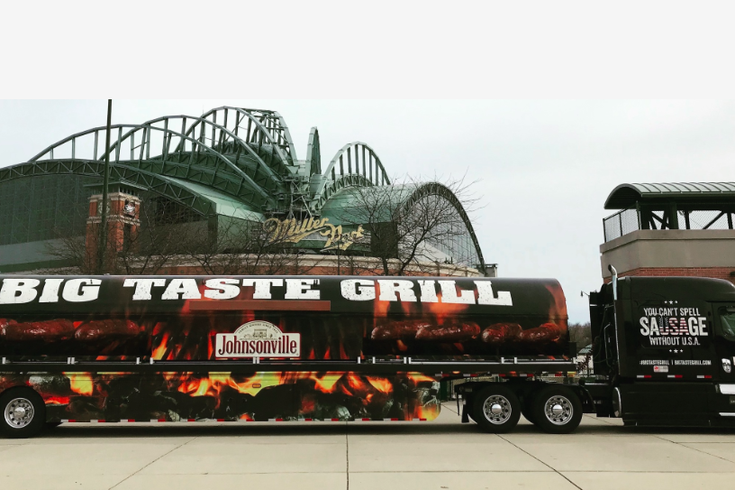 The festivities surrounding next month's Army-Navy football game at Lincoln Financial Field will include the appearance in South Philly of one of the world's largest barbecue grills.

Johnsonville's Big Taste Grill, a 65-foot tanker semi truck converted into a grill, will make a stop in Philly on Saturday, Dec. 8 to raise money for the Troops/Nine Line Foundation, specifically for the Veterans Village Project in Savannah, Georgia.

The enormous truck first hit the road in 1995 as an extension of the Wisconsin-based sausage company. Led by a core team of five, the stop in Philadelphia will be spearheaded by Grillmaster Jay Whetsel.

The Big Taste Grill can cook 750 bratwurst at a time on its 40-square-foot grilling surface—good for 2,500 brats an hour.

To get a better sense of the size of this thing, check out this video, posted by Johnsonville a couple years ago when they were looking to hire a new grill master.

Over the past 23 years, the Big Taste Grill has raised more than $4 million for charities nationwide.

Philadelphia is locked in to host the Army-Navy game through 2022. The event alone draws approximately 50,000 people to the stadium and serves as a cornerstone of the alumni experience for both military branches.

The 9-2 Army Black Knights will take on the 3-9 Navy Midshipmen at 3 p.m. on game day. The Big Taste Grill — you can't possibly miss it — will be firing up sausages and brats from 10 a.m. until kickoff outside the stadium.