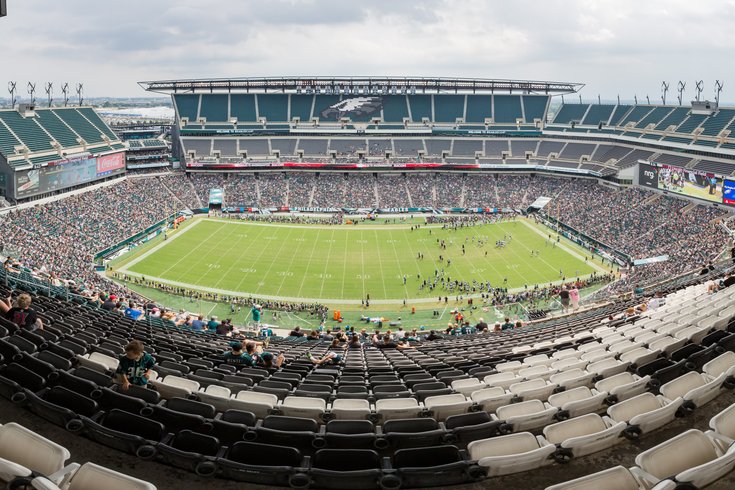 A photo panoramic of Lincoln Financial Field during the Eagles public practice on August 11, 2018.

Temple University will return to the table with the Philadelphia Eagles to discuss an extension of the college football program's lease to play at Lincoln Financial Field.

The pending discussions, reported Tuesday by The Temple News, come as the university weighs its controversial plan for a $130 million stadium at its North Philadelphia campus.

In December 2016, as Temple approached the end of its existing 15-year lease with the Eagles, the university declined to sign a 30-year agreement to stay at the Linc. The Eagles had doubled the cost to $2 million per year and Temple opted instead for a short-term extension through the 2018 season.

The decision came as the university introduced plans to explore a 35,000-seat facility of its own. The project, instantly greeted by community resistance, would save Temple $2 million annually and create new revenue streams while raising the profile of the Owls' program.

Neighborhood backlash and political uncertainty compelled the university to reevaluate its strategy earlier this year. A plan to submit the stadium proposal to the City Planning Commission was scrapped after a town hall meeting devolved into chaos in early March.

The university's own survey of students and faculty found that a majority of those in the Temple community are against the construction of an on-campus stadium.

Opponents of the project in the community say the university has a questionable history of honoring the needs of its neighbors. Apart from practical objections to noise and traffic complications, North Philadelphia neighbors believe Temple was not trustworthy or transparent throughout the research phase of the proposal.

At a minimum, Temple will now need a place to play home games during the 2020 season. University officials estimate the construction of a stadium would take up to two years to complete.

The university maintains that it wants to pursue the on-campus stadium project. It appears their next step and may be to leverage the creation of a Special Services District that more directly involves the community in decisions related to its future development plans.