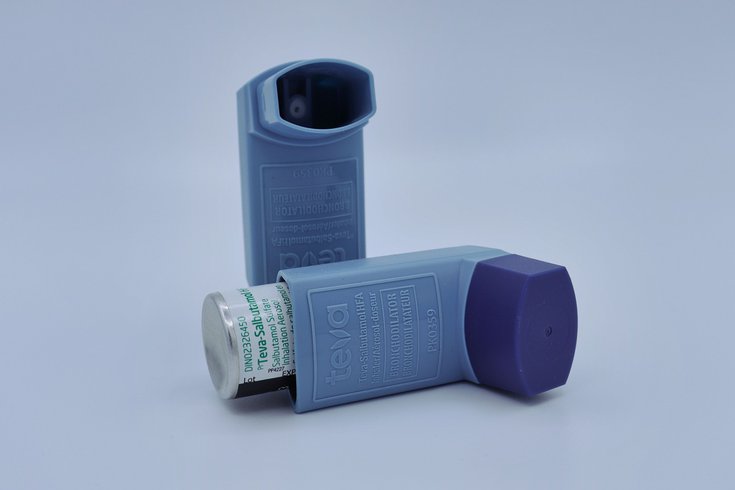 Black and Hispanic people face a disproportionate burden of asthma complications, but a new intervention led to improved outcomes, a study in the New England Journal of Medicine found.

Black and Hispanic people face a disproportionate burden of asthma complications, but the findings from a recent clinical trial offer a potential solution that may help reduce those disparities.

An intervention using inhaled corticosteroids led to fewer severe asthma exacerbations, improved quality of life and fewer days lost from work or school for Black and Hispanic people in a study published by the New England Journal of Medicine.

"The most important message is that the intervention worked in an underserved population and can be broadly applied to this population," said Dr. Kartik Shenoy, who oversaw Temple University's portion of the so-called PREPARE trial. "It reduces flare-ups and helps them breathe better."

Asthma causes the airways in the lungs to become enflamed and narrow, causing wheezing, coughing and tightness in the chest. People of any age can suffer from asthma, but it typically begins in childhood. Treatment plans usually include medication, regular monitoring and the avoidance of triggers – factors that can lead to a flare-up or attack.

Last year, asthma management guidelines were updated based on previous studies that suggested patients with moderate-to-severe asthma could better control their symptoms by using inhaled corticosteroids with formoterol – a long-acting reliever – twice a day and when symptoms flare up instead of simply using the combination twice a day.

Most of those studies, however, were not conducted in real world settings and did not take into account that most people with asthma do not use their medications twice a day. Nor did they include many Black or Hispanic people, who face higher rates of asthma complications.

Black and Hispanic people experience higher rates of asthma-related emergency visits and hospitalizations. And they are almost twice as likely to die of asthma than white people.

"Results of the PREPARE trial show us that we can help reduce the impact of asthma through the simple, patient-centered intervention of having patients use (inhaled corticosteroids) whenever they use their rescue inhaler or nebulizer to treat symptoms," the study's leader, Dr. Elliot Israel, of Brigham and Women's Hospital in Boston, said in a statement.

"This intervention is effective – easy to implement, easy to use and comes at a low cost."

In the trial, Black and Hispanic participants with asthma were instructed to use inhaled corticosteroids whenever they used a bronchodilator as a rescue inhaler and to continue taking their other asthma medications. There was no change in their underlying medications.

Bronchodilators, such as formoterol or albuterol, are medications that make breathing easier by relaxing the muscles in the lungs and widening the airways. They often are prescribed in addition to corticosteroids. Albuterol provides more short-term relief whereas formoterol is a long-acting medication.

When an asthma patient only takes a bronchodilator during a flare up, the medication actually revs up inflammation, Shenoy said. Adding the inhaled corticosteroids reduces the exacerbation of symptoms and the need for albuterol.

According to the study's findings, the intervention decreased the risk of severe asthma exacerbations by 15% – which breaks down to about 0.13 exacerbations per patient per year. It also reduced asthma symptoms and days of impairments for Black and Hispanic people with moderate-to-severe asthma.

The 0.13 exacerbation reduction was equivalent to the reductions seen in the studies that led the National Heart Lung and Blood Institute to update its recommendations for people with moderate-to-severe asthma.

Frances Jeffries, 41, of West Philadelphia, said her asthma was so severe that she was on supplemental oxygen before participating in the trial. She hasn't had a flare-up since December.

"I would recommend the new treatment strategy," she said. "It was a more step-by-step regimen."

The trial was conducted at 19 sites in the U.S., including Temple, between November 2017 and April 2021. It included 1,201 Black and Hispanic adults with moderate-to-severe asthma. The participants were randomly selected to either receive the intervention or continue their usual care. They were then followed for 15 months.

The findings were presented at the 2022 Annual Meeting of the American Academy of Allergy, Asthma & Immunology.