At long last, Philly has a team exec not trying to ram ‘Trust the Process’ B.S. down our collective throats 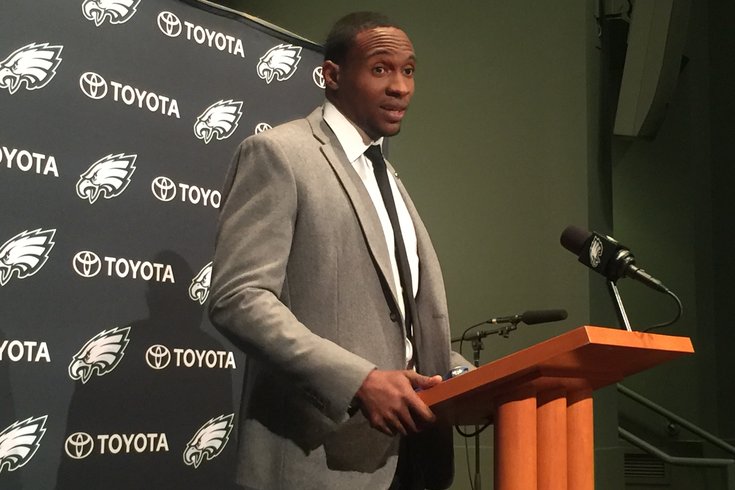 Alshon Jeffery meets the media on Friday, a day after agreeing to a one-year, $14 million deal with the Eagles.

After years of Philadelphia’s pro-sports teams telling the fans to wait ‘till next year, the Eagles GM made a bold move for this season — right now — when he signed the best free-agent wide receiver, Alshon Jeffery, to a one-year, $14-million deal last week.

Everything about the agreement seems too good to be true. Jeffery is 27, has extraordinary hands and an excellent attitude, loves franchise quarterback Carson Wentz and was willing to come here with no financial guarantee beyond the 2017 season.

Even the naysayers had to work extra hard to find something to grumble about after Roseman sprung his latest March surprise on the football world. Of course, the critics focused on the brevity of the deal, even though it was actually the most encouraging part.

Remember, the Eagles can always keep Jeffery here for years beyond that initial season by using the franchise or transition tags on him. He has no such security. If he doesn’t perform according to expectations, he’s back on the free-agent market and no longer siphoning funds from the salary cap.

The Eagles will be better this season; there’s no question now. Barring major injuries, they are one good draft away from playoff contention, maybe even their first postseason win in seven years. Yes, they are still retooling — after all, they currently employ zero cornerbacks — but they are not conceding 2017 the way our other pro teams have so readily done.

Think about it. The Phillies are still years away from the glory days of 2006-11, if indeed they ever get back there under the timid leadership of their unproven front office. The Flyers keep telling us how many great kids they have, while they keep underperforming. And the Sixers are the poster boys for tanking, now in their fourth season of bottom-feeding.

Not the Birds, and definitely not Howie Roseman. The reborn executive vice-president of football operations is not hedging his bets in the interest of job security. At this point, no one other than Roseman can even explain how he has wedged Jeffery, another wide receiver, Torrey Smith, and guard Chance Warmack under the already tight salary cap.

And no one cares. The only thing that mattered last week was that Philadelphia finally had a team willing to take a calculated risk to win now, and to face the inevitable wrath of the fans if it failed. Roseman could have bought another year or two by following what he had preached just before free agency opened — patience — but he didn’t.

In fact, Roseman, who was castigated in this space last week after his cautious words, was just employing some slick gamesmanship before the big moves. As he did last year, the GM had a plan and executed it brilliantly. In 2016, it was claiming the quarterback of the future, and this year it was finding some support for the kid.

It is no secret to regular readers of this column that Roseman has been a source of irritation here for years. He won the job of running an NFL franchise by back-room politicking, he still lacks a resume that inspires confidence and he still falls far too deeply in love with his own draft picks. No one is crowning him a hero yet, nor fitting him for a Super Bowl ring.

But it has been years since someone running a Philadelphia sports franchise had as good a day as Howie Roseman did last Thursday, and he deserves credit for that. He is not rebuilding. He is not worried about 2019 or 2020. He is trying to compete right now.

When are our other teams going to realize that, in Philadelphia, the fans deserve no less than that?

No one else will say it, so I will. If the Flyers fail to make the playoffs this season, Dave Hakstol should be fired. That’s right. Fired.

What the coach did last week when he decided to bench hot goalie Steve Mason in favor of a rusty and shaky Michael Neuvirth against Toronto was so idiotic, so fundamentally illogical, that he should lose his job unless the team somehow overcomes his robotic thinking.

Neuvirth, who just got a two-year contract extension — Mason will be a free agent at the end of the season — was as shocked as everybody else when Hakstol handed him a huge start against a playoff contender, citing Neuvirth’s superior stats against the Maple Leafs. Mason was 3-0-1 in his previous four starts, and Neuvirth had struggled of late. The coach went with the matchup numbers, and got burned.

Stupidly, I assumed the Teflon coach would finally absorb some old-fashioned Philadelphia venom after his season-crushing blunder, but he didn’t. As far as I can tell, only my partner at WIP, Al Morganti, openly questioned the absurd move. Has everybody bought into the not-this-season message the Flyers have been promoting for years now?

Neuvirth was absurdly out of position on the first Toronto goal in that damaging 4-2 loss, and the puny Flyers offense never really recovered. Hakstol offered no second thoughts on his decision after the game — no surprise since he rarely offers even first thoughts during his wooden news briefings.

If the Flyers don’t make the playoffs this season — they proceeded to lose a heartbreaker Saturday in Boston, 2-1, despite solid goaltending by Mason — only a fool would hand over a mulligan to Hakstol for the team backsliding in his second year. Also, let’s not forget the steep decline of captain Claude Giroux this season, and the stunning disappointment of Shayne Gostisbehere in his second full year in the NHL.

Dave Hakstol needs to held accountable for all of his failures, none more spectacular than his move last week to start Neuvirth over Mason with the playoffs already in jeopardy. If I were in charge — admittedly an alarming prospect — the coach would have the final 14 games to redeem himself.

If he doesn’t, he should head back to college hockey, where he belongs.

Aaron Nola was selected with the seventh pick in the 2014 major-league draft, an exalted spot that should produce a star player. So far, Nola has fallen far short of that expectation, despite the Phillies’ increasingly insulting efforts to cover for him. When will the once-projected ace have to produce like one?

Granted, Nola is still only 23 and is coming back from elbow issues that cut short his first full season with the Phillies, but his underwhelming array of pitches and his equally tepid results are becoming more and more difficult to ignore. After all, last season’s 4.78 ERA screams mediocrity, regardless of circumstance.

After allowing six of the 11 batters he faced to reach base in a two-run, two-inning outing last Tuesday against a makeshift Detroit lineup, Nola was equally underwhelming Sunday, allowing three runs in three and a third innings against Boston. His spring ERA is 6.14.

What goes without saying is that Nola requires pinpoint control to succeed at the big-league level, and that is not supposed to be the case with someone drafted so high. Top picks are expected to blow the top batters away with 97-mph fastballs and knee-buckling curves, not paint corners.

Is Nola’s elbow OK now? Apparently so, since the Phillies happily announce after every outing how much better he feels this season than last. Then where is the stuff that made him so overpowering at LSU and so encouraging in the minors? Number-three starters (or lower) are never worth a top-10 pick in the draft, despite all of the disclaimers.

And that’s the sad truth about yet another mistake of the Ruben Amaro GM era. Despite the hype, Nola is probably not going to be more than ordinary because his right elbow is far more likely to pop than his fastball. He’s just not that good.

The sooner the Phillies accept this unfortunate reality, the better.

• Is it really possible Eagles GM Howie Roseman offered the team leader on defense, safety Malcolm Jenkins, in a trade proposal to New Orleans for wide receiver Brandin Cooks last week? The Birds already have no cornerbacks, and Roseman was willing to give up his best defender for a young pass-catcher with a dubious attitude? The Eagles should be thrilled the Saints reportedly turned down that offer. Sometimes it’s better to be lucky than good.

• Another great move the Eagles didn’t make this week was signing DeSean Jackson. The soon-to-be 31-year old got a three-year deal with Tampa worth a guaranteed $20 million. There are still lots of fans here who love Jackson, but they are more enamored with the memory of his big-play skills than with the increasingly cranky demeanor. His me-first style will grate on the Bucs, for sure, and his new riches will make him even more obnoxious than he was here and in Washington. Good riddance, again.

• Speaking of Washington, how about the week the Redskins just had? They got involved in a public smear campaign over the alleged drinking problem of GM Scot McCloughan before finally firing him, then they lost their two best receivers, Jackson and Pierre Garcon, in free agency, and finally they outraged parents by handing out risqué photos of their cheerleaders to sixth graders during a recent school visit. Just when you think no team can be run more poorly than the Sixers, Redskins owner Daniel Snyder lowers the bar even more.

• Is it just me or has Doug Pederson disappeared from sight like no recent Eagle coach? He didn’t do his usual day-after news conference following the final game of the season, and has been available only once to the media — at the NFL Combine — in the two-plus months since then. Are Peterson’s bosses wary of his public comments because he has been off-message a few times? This situation bears watching.

• The departure of Connor Barwin last week after an exemplary career with the Eagles was like no recent exit of a sports hero here. Barwin’s work in the community transcended his athletic exploits in a unique way. Over the last seven years, he appeared more times on my WIP radio show than any other Eagle, enduring my annoying questions without complaint as long as he could promote another of his endless charitable endeavors. He deserves nothing but success wherever he goes next.